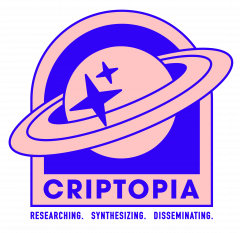 A Look into Crip Time with Aislinn Thomas' three windows

When we think about (dis)ability, often we imagine it through examples of spatial limitation, perhaps because it is the most visible or obvious form of (dis)abled experience (wheelchairs and canes are familiar signifiers). However, since the experience of being (dis)abled relates to the context that bodies exist in (see the social model of disability), space is only part of the picture.  Our social, political, technological and temporal environments, as well as our physical environments, play into how (dis)abled we feel, or are perceived to be in the world. For example, technologies often can offset physical limitations, like how the development of glasses has caused most vision impairments to be inconsequential to everyday living. Time and our temporal environment, though slippery in their abstraction, have concrete effects on the everyday experiences of living a limited life, as captured in Aislinn Thomas’s 2018 video installation three windows. Thomas’s work invites the viewer to engage with what many of us (dis)abled folks call ‘crip time.’ 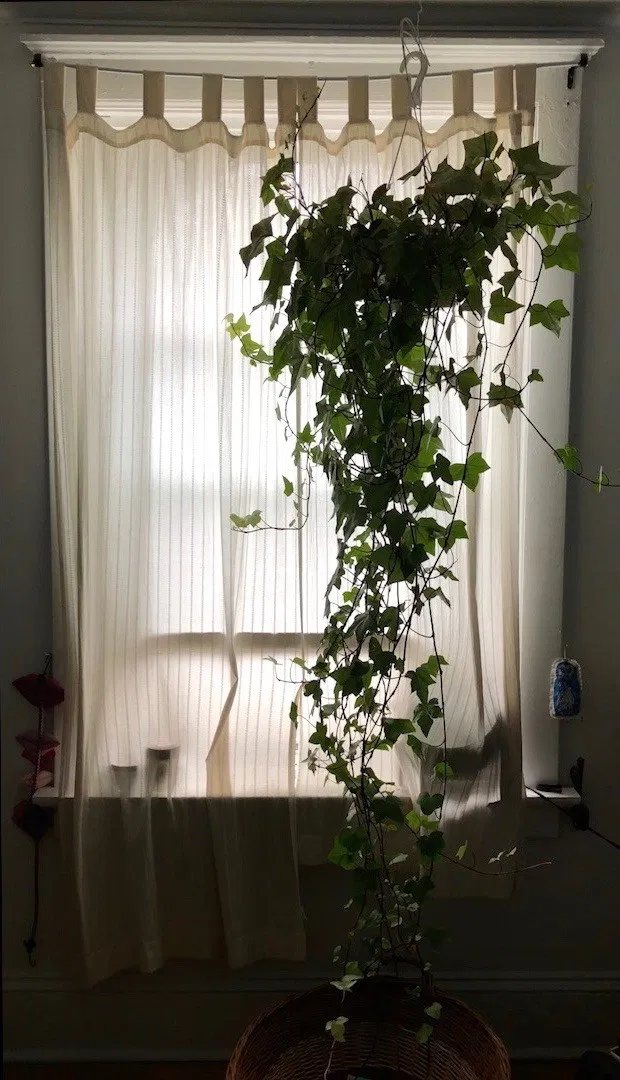 But first, you might be wondering what I mean when I use the term ‘temporal environment’? Our temporal environment consists of all of the ways that time is structured in our lives—everything from the units of measurement (minutes/hours/days) to institutional temporalities (9-5 work week/school hours) to social- temporal standards (the pressure to get married or have a baby by a certain age). These temporal structures can seem natural or unquestionable in their ubiquity; however, they are just as much a human construction as the physical structures we have built for ourselves.

As historian Douglas C. Baynton brings to light, our contemporary understandings of both time and disability are related to changes brought on by competitive industrial capitalism and the adoption of Darwinian evolutionary theory in the late 19th and early 20th centuries. He explains how the creation of factory time and the increasing desire for productivity, standardization and efficiency, changed individual lived-experiences of time as well as society’s ideological and moral conceptions of time. These new ideas about time led to the systemic oppression of people deemed unproductive, non-normative, inefficient, or unreliable.

In the 20th century, governments and institutions passed regulations that banned unsightly people from being in public, encouraged euthanizing infants with visible impairments, forced adults with perceived intellectual and emotional shortcomings to be sterilized, and allowed businesses to pay (dis)abled workers less. Today, the shadows of these sentiments can be found in all sorts of regulations nationally and internationally. In Canada, it was only in 2017 that a law requiring businesses to pay (dis)abled employees minimum wage went into effect, after which many people who were earning less than minimum wage lost their jobs. These macro and micro aggressions towards people with (dis)abilities continue today, no doubt because, in a capitalist economy that prioritizes efficiency and productivity, discrimination towards people who have a reduced capacity for production is inevitable. Our current social and temporal environments suggest that we should spend most (or all) of our time being productive, which is in direct conflict with the physical and emotional needs of many individuals. 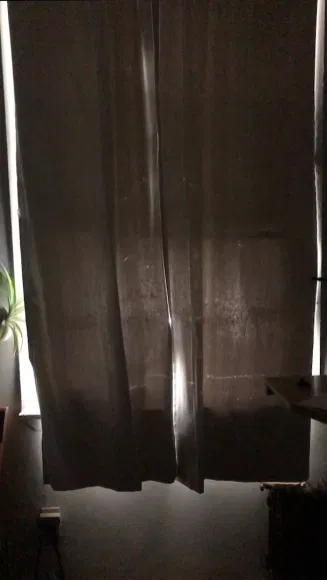 [Image Description: Black curtain covering a window, backlit with a glimpse of a green plant on the left.]

Crip time is a counternarrative to industrial time. It describes the experiences of (dis)abled people when they are unable or unwilling to participate in normative temporal structures.

1. grief time (when we are grieving the loss or lack of ability)

2. sick time (when we are physically unable to do things)

3. broken time (when we are listening to and healing our bodies)

4. vampire time (when we are out of sync with those around us)

5. crip time travel (when our bodies age us or infantilize us)

Every (dis)abled person experiences these temporal distortions differently as there is a vast spectrum of frequency, intensity and duration.

It is these temporal distortions that Aislinn Thomas captures in her work, three windows. The work is a one-channel 15-minute looped video with three frames; each contains a window with a gently moving curtain blocking soft light daylight. In one frame, the curtain is a dark charcoal colour, while the other two are white, one with a large viny plant hanging in front. At moments, the movements are so minute the video might be mistaken for a still. This work exemplifies the sense of limitation that crip time can bring forth: three windows is haunted by what is not there; the moments that the artists cannot have; the life she cannot live; the places she cannot be. Without explicitly bringing these missed moments into her work, Thomas subverts normative time by invoking questions of productivity, limitation, and domesticity. 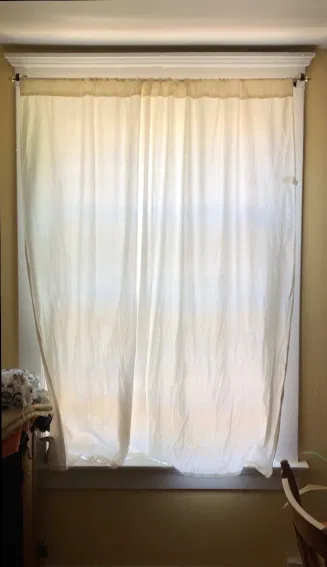 In a gallery space, I can imagine myself walking by this piece without much thought. It is not a piece that begs for your attention; it is decidedly unmonumental and unglamorous. At first glance, the work might be perceived as simplistic, passive, lazy, or inert (all pejorative descriptors of disability), when in fact, it is an invitation to sit and be present with this moment. Thomas describes the work as:

an invitation to slowness and a more receptive mode of being.  The video presents windows in my home: sites of permeability, exchange and chance.  Though at times subtle (if present at all), the movement of the curtains and glow of light is oddly mesmerizing and reminiscent of breath.

This project and it’s companion piece, Three windows described by three voices…, grew out of a body of work that seeks to playfully reclaim domestic space as a site of imagination and possibility even–and especially–when it is not where a person would prefer to spend their time.

This work offers the viewer a common paradox to people whose lives have been disabled by their temporal environment: a moment where the most productive thing you can do is a kind of nothing.

Ultimately, three windows invites viewers to participate in an activity that Thomas probably spends more time doing than she cares to: window watching, perhaps waiting uncomfortably for something to change, yearning for a faster pace of life—or perhaps, she just lets the slowness take her, embracing a life disabled. In using her work to recreate the feeling of temporal distortions and crip time, rather than presenting a (dis)abled body, Thomas creates a compassionate, informative, and effective depiction of what living with limitations might feel like.

Alyse Tunnell is an accessibility advocate and writer currently working as a freelance content creator and accessibility consultant. Recently, Alyse was awarded a spot in the Art Volt’s Mentorship program & Momus’ Emerging Critic Residency. As a (dis)abled, neurodiverse, queer /genderqueer, anti-racist, anti-colonial, settler creator, Alyse strives to build intersectional frameworks of compassion for marginalized folks of all sorts. Together with her creative partner Cherie Pyne, Alyse is building Criptopia, a media organization based around expanding accessibility politics.  Alyse graduated from the Art History program at Concordia University in Spring 2020 and continues to reside in Tiohtià:ke/Montréal, Quebec.  (She//They)

If you have feedback, questions, or want to learn more about criptopia, email Alyse at criptopia.media@gmail.com 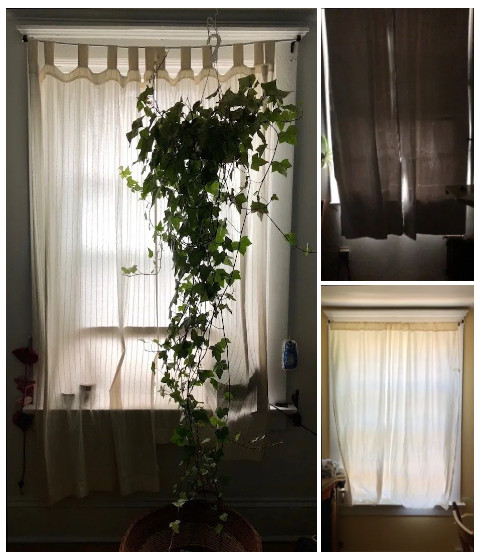 Article
569 views
A Look into Crip Time with Aislinn Thomas' three windows
Are you sure?
Please, enter a value here