the intersection of climate change and systemic racism

While the coronavirus has taken up most of the media bandwidth in 2020, many major problems still loom large, undeterred by the pandemic. None among them loom larger than the climate crisis; no other crisis encompasses so many others all at once. And while the many ways in which racism and wealth inequality have been integral parts of the crisis aren't talked about nearly enough. Just one look at the current lived experiences of people of colour in the poorest American neighborhoods, Indigenous people throughout North American reservations, and the poorest countries around the world proves this.

Alexandria Ocasio-Cortez was met with scoffs and mockery by right-wingers and left-wing contrarians alike when she uttered the words "environmental racism" in an interview earlier this year. The recently re-elected New York Congresswoman told Amy Goodman of Democracy Now:

It was a statement quickly met with derision from the right. Michael Tracey, Fox News' favorite ‘leftist’ replied, "AOC casually drops the term 'environmental racism' like she expects anyone other than an extremely narrow band of creepy activist-brained losers to even know what the fuck she's talking about."

But whose side do the facts actually support? The side citing specific examples of minorities getting the environmental short end of the stick as evidence of environmental racism—or the side refusing to acknowledge those examples as evidence simply due to the terminology being used to describe it?

Well, let's take a look at the evidence. According to a peer-reviewed study by the University of Minnesota from 2014, pollution can be segregated too. The study described a "pattern of environmental injustice," finding that nonwhite communities are on average exposed to 38% higher levels of NO2 than white communities. The gaps vary across America, but remain larger in big cities, and the difference in exposure nationwide is the equivalent of 7,000 deaths per year caused by NO2-induced heart disease.

But critical levels of NO2 is far from the only environmental injustice these communities face; the list of sources for pollutants that are disproportionately present in nonwhite neighborhoods is tragically long, including suspiciously placed factories, highways, landfills, toxic dumping, and fracking, among so many others.

In addition to all of this, poor neighbourhoods tend to have much less greenery to produce CO2 and much more asphalt which absorbs heat. A study by NPR sheds light on this disparity: according to their report, "NPR analyzed 97 of the most populous U.S. cities using the median household income from the U.S. Census Bureau data and thermal satellite images from NASA and the U.S. Geological Survey. In more than three-quarters of those cities, we found that where it's hotter, it also tends to be poorer."

With all this taken into consideration, it is undeniable that environmental racism exists, regardless of whether or not someone agrees with the terminology. I'd also argue that anyone more outraged by whichever term being used to describe such a crisis than the crisis itself is, at best, shortsighted or, most likely, acting in bad faith.

Of course, the climate crisis isn't a uniquely American crisis, and neither are the inequalities it exposes. The consequences are being felt in indigenous reservations throughout North America and in poor countries throughout the world. Most recently,  according to a TYT report, the Environmental Protection Agency under Trump has granted the Oklahoma governmental control of Tribal Lands, and in doing so, reversed Tribal Sovereignty that was recognized by even the Supreme Court. This would open up the State's Tribal Lands to hazardous waste dumping, and fracking, among other hazards, while also protecting major polluters such as the industrial agriculture industry. Casey Camp-Horinek, Environmental Ambassador & Elder & Hereditary Drumkeeper Ponca Tribe of Oklahoma, provided the following statement in reaction the news:

“After over 500 years of oppression, lies, genocide, ecocide, and broken treaties, we should have expected the EPA ruling in favor of racist Governor Stitt of Oklahoma, yet it still stings. Under the Trump administration, destroying all environmental protection has been ramped up to give the fossil fuel industry life support as it takes its last dying breath. Who suffers the results? Everyone and everything! Who benefits? Trump and his cronies, climate change deniers like Governor Stitt, Senators Inhofe and Langford, who are financially supported by big oil and gas."

Meanwhile, in Canada, home to 60% of the world’s lakes and one-fifth of the world’s fresh water, not only are many indigenous reservations still without running water, but reservations such as the Six Nations tribal lands, located just 90 minutes from Toronto, have been made to endure Nestle extracting 3.6 million litres of water from nearby treaty land while their own water situation remains in crisis. According to the United Nations, "by 2025, 1.8 billion people will live with dire water shortages, and two-thirds of the world’s population could be living under stressed water conditions.” That means a race to find untapped springs. Anticipating shortages, companies like Nestlé are trying to lock in as much of the world’s water as possible.

As the climate crisis continues to cause a record number of droughts, making natural resources scarcer than ever before, the commercialization of resources such as clean water by corporations will make conditions unlivable for historically marginalized communities like the First Nations.

So what would the combination of climate change, wealth inequality, and systemic racism look like in the future if the status quo continues unchecked? The UN Special Rapporteur on extreme poverty and human rights, Philip Alston, warns of a "climate apartheid" on a global scale. Mr Alston told The Independent that: "While people in poverty are responsible for just a fraction of global emissions, they will bear the brunt of climate change, and have the least capacity to protect themselves. We risk a ‘climate apartheid’ scenario where the wealthy pay to escape overheating, hunger, and conflict while the rest of the world is left to suffer."

He predicts that by 2100, millions will be forced to choose between starvation and migration under even the "best-case" scenario of 1.5C increase in global warmth. Considering that a record seven million people worldwide were displaced by extreme weather in just the first half of 2019, these calculations don't seem too far off. And, unfortunately, a report named the Ecological Threat Register, put together by the Institute for Economics and Peace (IEP) in Sydney supports his prediction; with a global population expected to surpass 10 billion by 2050, the hoarding of natural resources by the wealthy will become (and already is) unsustainable.

This, along with water stress, food insecurity, droughts, floods, cyclones, and rising sea levels and temperatures would result in the displacement of 1.2 billion people worldwide, with the most endangered regions being Sub-Saharan Africa, South Asia, the Middle East and North Africa, according to the IEP. As Mr. Alston so succinctly put it, "Climate change is, among other things, an unconscionable assault on the poor." And the world's poor are often disproportionately people of color.

Things may seem bleak, but we need to remember that this is not equivalent  hopeless. There are many different ways in which direct action can be taken to mitigate the effects of this coming catastrophe, but certain facts have to be acknowledged before we begin.

First of all, while individual behaviour should be changed for the better whenever possible, the fact remains that more than 70% of the world's greenhouse gas emissions since 1988 have come from just 100 companies. This is why putting the onus of preventing climate change solely on the average citizen misses the bigger picture.

Second of all, the fact that those same companies outspend green groups to influence US policy by 10 to 1 should be a bigger deal. Meaningful climate action will never happen as long as climate inaction in government is financially rewarded by major polluters.

Further, representation matters in the fight against climate change too. Considering that people of color will bear the brunt of climate change, it makes no sense that we make up less than 12% of environmental groups while, according to Solutions Project, "Research has shown 95% of the $60 billion in annual foundation funding for all causes goes to organizations led by white people and 70 to 80% goes to those led by men."

Keep ringing the alarm, hold your elected officials at every level accountable, and don't forget to elevate and include marginalized voices in your own fight for change. 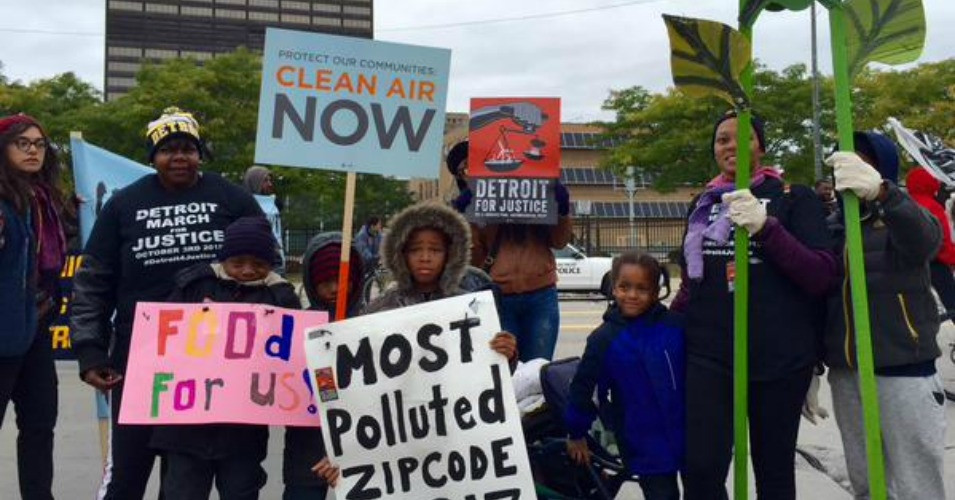 Article
climatechange environmentalracism politics humanrights
237 views
A Polluted Promised Land: the intersection of climate change and systemic racism
Are you sure?
Please, enter a value here