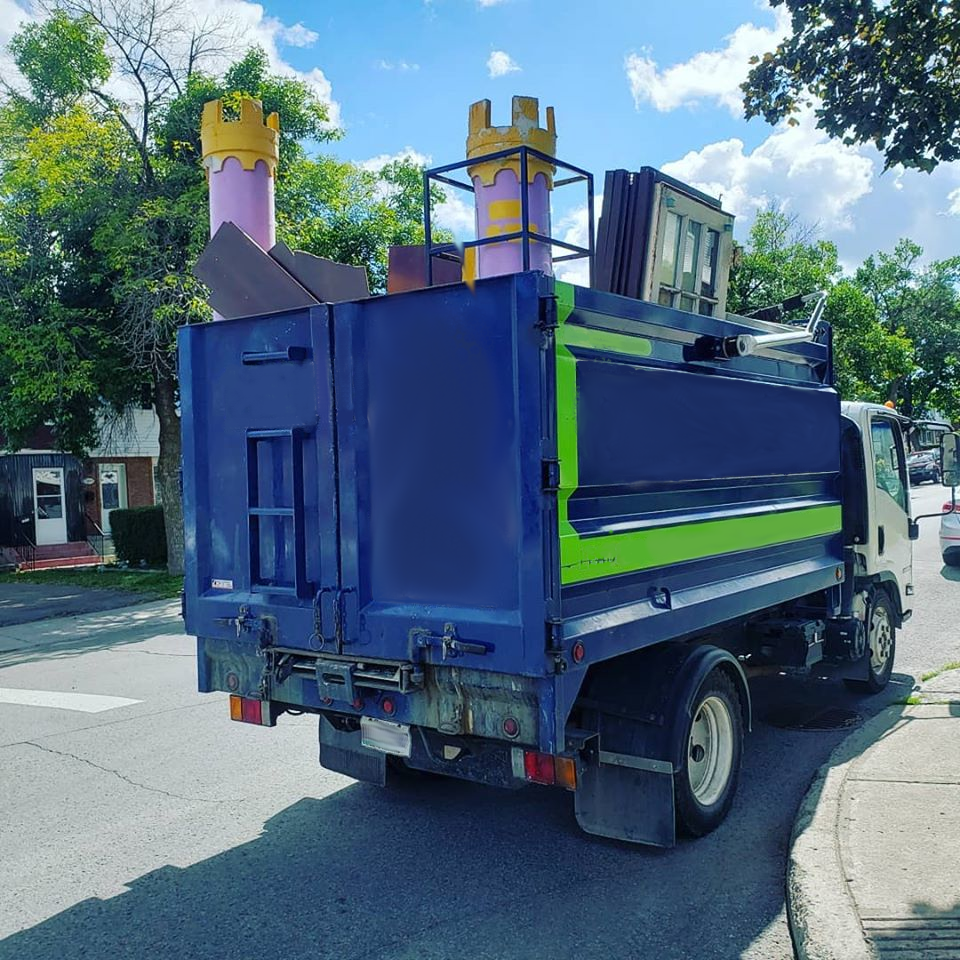 At the recycling company, a large part of our job was traveling from client to client. We met at 7am in a tiny depot in Lachine, Quebec. We would receive our client list, then we broke off into groups of two to travel around the service area and grab anything that the clients wanted to dispose of. The service area reached from Trois-Rivières to Gatineau, and as far north as Mont Tremblant. My shifts usually lasted from 12 to 16 hours, and for a large part of that time I was stuck with my assigned team member inside an open backed truck.

In the trucks, I heard about drugs and sex. I heard chauvinistic stories and tiny bits of wonderment. I heard racist jokes and intimate family tales. The act of suffering together, whether it involved carrying loads of bricks, or bags of human shit, or disposing of couches covered in bedbugs, leads to a level of trust that allows people to talk about every horrible thing that happened in their lives, about every horrible thing that they have done. I heard about addictions and childhood abuse. I heard about assaults and acts of police brutality. I heard men worried about their wives and children.

I often heard declarations of great suffering and offensive statements of neofacist bullshit uttered from the same mouth in the same day. I feel some ambivalence about this, but even people with the worst beliefs are still people, and people suffer. Sometimes that suffering is what made them villains to begin with.

I’ve done a lot of blue collar work in my life, and while it varies in character from place to place, there is a theme that runs throughout. It’s a culture of broken men birthed from a cycle of violence and suffering, that ripples back in time from the first shudders of Adam to the present moment.

Cain, Abel and the Refrigerator

Our company had a contract with the city of Montreal to clean out the subsidized housing units. These were often the most disgusting jobs that we had at the company, because we usually didn’t get called to a unit if the person left of their own free will. If a person left on their own, they would pack up their belongings, and clean up after themselves before moving to their new residence. If a person left of their own free will, there was nothing left to clean out. So we pretty much only got called if the person was dead, heading to prison, or was evicted for some other dire reason.

Often when we arrived there would be the smell of rotten food wafting from the kitchen, or of couches soaked in cat urine. Sometimes there were syringes scattered across the floor and cigarette burns on the furniture. More than once, there was human shit smeared across the walls and the ever-present smell of death lingering on the carpets. I know there are a lot of success stories around government housing, I can’t stress that fact enough, but I personally didn’t see any of the success stories while I worked for the company.

Cain and Abel both worked in a company division that specialized in cleaning out the subsidized housing units. Abel came from an abusive household and had lived through some horrible shit, and I am certain that Cain came from similar circumstances, though he never said it explicitly. They both had quick tempers and would scream at a person for the most minor transgression, and transgressions often came when trapped in these depressing homes. The big difference between the two men was that Abel would eventually realize he was in the wrong and would apologize once he was able to collect himself. Abel was always trying to be better, but Cain had a meanness in his eyes that never seemed to soften.

One day, Abel dropped a fridge on Cain. They were walking down a flight of stairs, when Abel lost his grip. It was probably an accident. Abel swears to god that he never intended to do any harm, but Cain fell down a flight of stairs and had the wind knocked out of him by the weighty appliance crashing down on his chest. His shoulder popped out of place and he spent a week in bed letting the muscles mend. While Abel swore again and again that it was an accident, Cain refused to believe it, and began to plot his revenge. He swore that if he ever got the chance he’d ACCIDENTALLY throw an effin’ piano on Abel’s skull and stand on top of it until Abel stopped breathing. Management took the threat seriously enough to separate the two men at work, but they got pretty close to a fist fight in the lunchroom on more than one occasion.

Both of these men are the product of suffering, but suffering doesn’t make you a better person. Suffering makes you good at finding ways to suffer a little bit less. There is still an image that some of us keep in our heads of Dickensian orphans who are good and pure because of their suffering. This is an image of suffering as a sort of Neo-christain baptism, that swallows up sin and spits out a benevolent Christ-figure who becomes saintly through the weight of his cross. The blue collar worker has his cross, but it doesn’t make him good or pure. It makes him lash out like a starved dog who just wants his suffering to end. It makes him into a man who fights dirty with refrigerators and washing machines as ammunition.

Anybody with a pulse

The job itself caused suffering of all sorts, but it also was populated by a certain type of broken person. The boss joked that he’d hire anyone with a pulse, and that attracted a lot of folks who had no other options. Icarus was addicted to opiates. He would disappear in the middle of his shift and turn up an hour later dazed and staring off into the distance. Odysseus was a new immigrant with six kids, who got into a physical altercation with his landlord and ended up with a criminal record. Sisyphus was a thief, and a womanizer, but he was also a father who wanted his daughter to have a good life. We used to joke that Sisyphus was a villain, but at least he was our villain. As long as you stayed on his good side he probably wouldn’t steal from you.

In the mornings when the cantine came, I used to order a cup of black coffee before going into the daily meeting. One day one of the warehouse workers turned to me, and said, “I don’t know how you drink that stuff. It’s worse than prison coffee,” and he knew that from experience.

I have complicated feelings about blue collar folks because I can see both the suffering they create and the suffering that they’re going through. They are oppressors in their complicity with patriarchy and white supremacy, but they are also oppressed by capitalism and the patriarchal forces that surround them and assimilate them into a culture of violence. I became close to villains whose pain I could see and empathize with to an intense degree.

The blue collar worker labours in dangerous conditions. He works fifty, sometimes sixty, hours a week. He’s often cheated out of large parts of his paycheck. He receives the brunt of every deregulation and failure of oversight. He is a victim of the system. He is a broken down part of the proletariat. He is a walking contradiction who’s too tired to think about anything but his own suffering, and he lashes out because of it.

Meanwhile, back at the farm...

My partner took out some nail polish the other night and the two of us did our nails. I picked a deep shade of red that made me feel delicate, sensual, and feminine. Every time I looked down at my nails I smiled, and, even in spite of my bad brushwork, I felt good. I felt delicate, and queer, and exciting, and beautiful. It just felt nice to have a colorful detail in contrast to my scruffy face and hairy arms.

The next day, before going to the store, I asked my partner for some nail polish remover. She turned to me and asked why my nails suddenly made me uncomfortable, and I had to think back to my days doing blue collar work. I thought about all the times I’d had wild nights then scrubbed off my lipstick and foundation before going to the factory, or the recycling plant. About the mornings spent butching up, and the days spent trying to sound a little less gentle, or softspoken, or just plain gay.

We did physically demanding work, and crude jokes and slurs were thrown around frequently, and while most of the boys were “just joking around,” I was still worried. I had an image in my mind of walking down a flight of stairs, perhaps with a fridge in my hands, and what if that burly blue collar man were to let go of the fridge and let it fall down the stairs onto my back or neck or whatever bone it could snap. I mean, it would definitely look like an accident, and it would probably be an accident... but even if it was an accident, would this man try as hard not to crush a queer little fairy boy as he would with the other guys? I was never quite sure, so I just tried to pass. I only spoke about partners who were cis women, and I learned to talk a little bit gruffer.

While I know and care for a lot of blue collar workers, I’m still afraid of them and have been for years. I have no urge to be an apologist for all of the terrible elements of blue collar culture, but at the same time they’ve been neglected by the left and it has made it easier for them to become indoctrinated and radicalized by right wing politics. The white working class makes up a large part of the conservative base in both Canada and the United States, and finding ways to reach out and convert these individuals will go a long way to building a better society.

I believe that the best way to do this is to understand their suffering and validate it. This does not and should not negate the harm they’ve caused. Pain and vitriol and not mutually exclusive. In fact I believe that grappling with the pain can unravel some of the roots of this vitriol. While there is a part of me that is still damaged by blue collar work, I still managed not to  remove my nail polish that day. 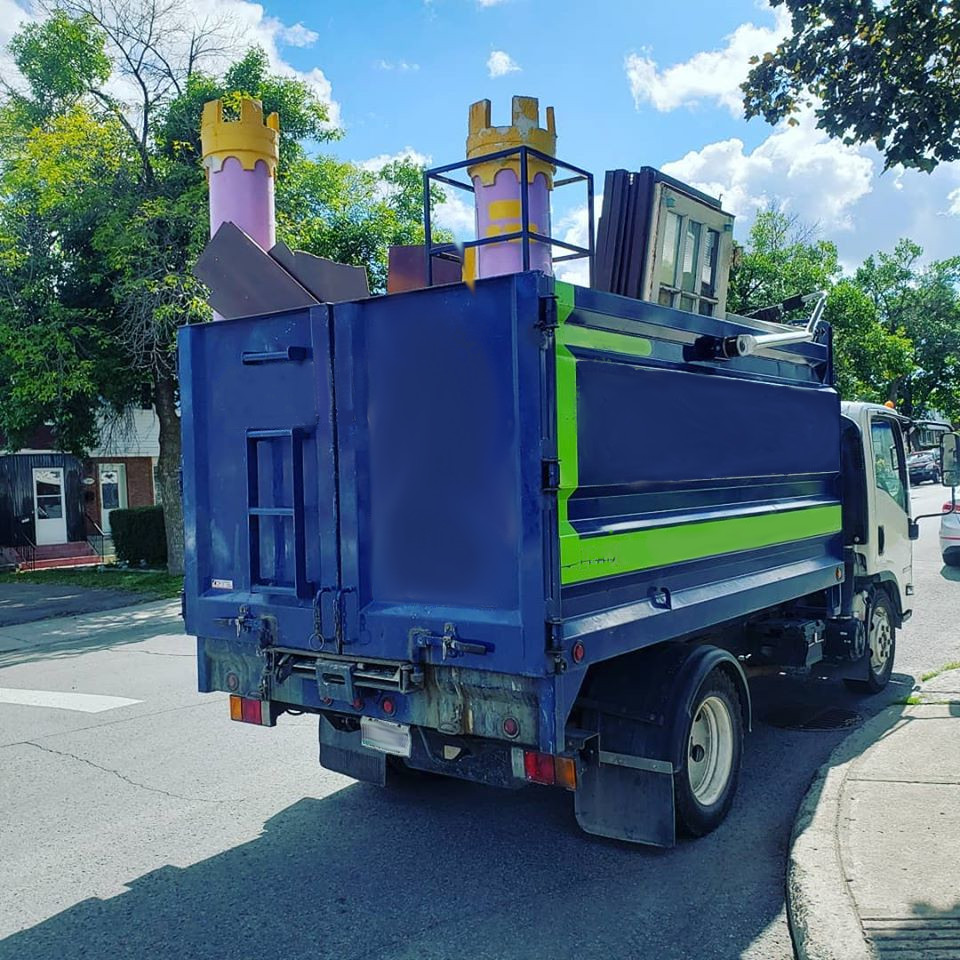