Godberd’s Johnson Cummins takes a look at the documentary film Desolation Center.  The film documents the early eighties underground music scene, which would prove to be a catalyst for mega fests Burning Man, Lollapalooza and Coachella

Herzog’s film is based on a true story of a rubber baron who moved a ship across the Peruvian climbs in order to transfer rubber to market. The real motivation was pure passion, as profits garnered from the sale of rubber would be used to build Fitzgerald’s dream of erecting an opera house in the thick of the jungle.

In the film Desolation Center it’s easy to draw the parallels behind Desolation promoter, narrator and director Stuart Sweezey’s choice of faraway locales of the treacherous Mojave Desert to host a bunch of unwashed youth with some generator powered punk rock bands. Sure a theatrical trailer featuring live early eighties footage of Meat Puppets, Sonic Youth, Savage Republic, Minutemen, Redd Kross and Einsturzende Neubaten in their teething stage is worth the admission alone not to mention performance artists Survival Research Laboratories and Boyd Rice had me downright giddy but the film delves far beyond just being a concert film romanticizing the pre Internet underground music scene. This is all fine and dandy but making this mandatory viewing for any fan of underground music is how the film easily transports the audience directly to the time and place which grainy uploads on Youtube can only hint at.

Its this going far beyond the pale is what makes the film really take off as Sweezey chases down some talking heads that would be main players in Desolation Center and captures the recounting of this period in their lives but its his ability to place the audience in the time frame locale of early eighties. For those of you who hadn’t been paying attention to the lyrical fodder of the day these were corrupt times in Los Angeles when L.A.P.D. chief Daryl Gates and his set of goons were only to eager to smash some punker skulls. Although only hinted at in mainstream media of the day Gates and his S.W.A.T. team waged a violent mission to stamp out the scourge of punk rock in the county of Los Angeles and it’s surrounding areas. All of this violence was not only one sided but was also an enemy from within as punk rock gangs were waging wars on the dance floor leaving many music fans spending time in emergency rooms.

Stuart and some forward thinking friends put on shows in abandoned areas in downtown L.A. but after L.A.P.D. pressure were forced to look elsewhere which led them to the Mojave dessert and one show on a boat moored in a San Pedro dock. Armed with a faulty generator and a sense of community started putting parties out in the desert.

Talking heads include the organizers of Lollapalooza and Coachella who were also attendees of Desolation events but even with Stuart behind the lens he hardly plays the part of revisionist and will fully admit he had no clue what he was doing. Amazing footage of Survival Research Laboratories “blowing shit up” in a performance ends when they attempt to blow up a rock in the desert a block of steel dislodges from a machine and launches just over the head of two hundred people at 200 mph. Other footage shows bus drivers hired to drive the punkers from Los Angeles with no maps, and my personal favorite was the night of Sonic Youth, Meat Puppets and Redd Kross and playing in complete darkness as the whole audience and band are tripping balls.

If you look hard enough events similar to Desolation are still happening and are as equally brimming with inspiration and passion, just not exactly like this though.

Even if you couldn’t give a toss about underground rock music this film is a truly necessary view for anybody looking to garner inspiration outside of the mainstream, no matter what decade.

Desolation Center has just finished its theatrical tour and is now gearing up for a streaming release at all of your favorite streaming platforms. 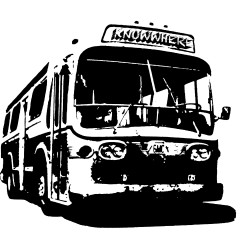