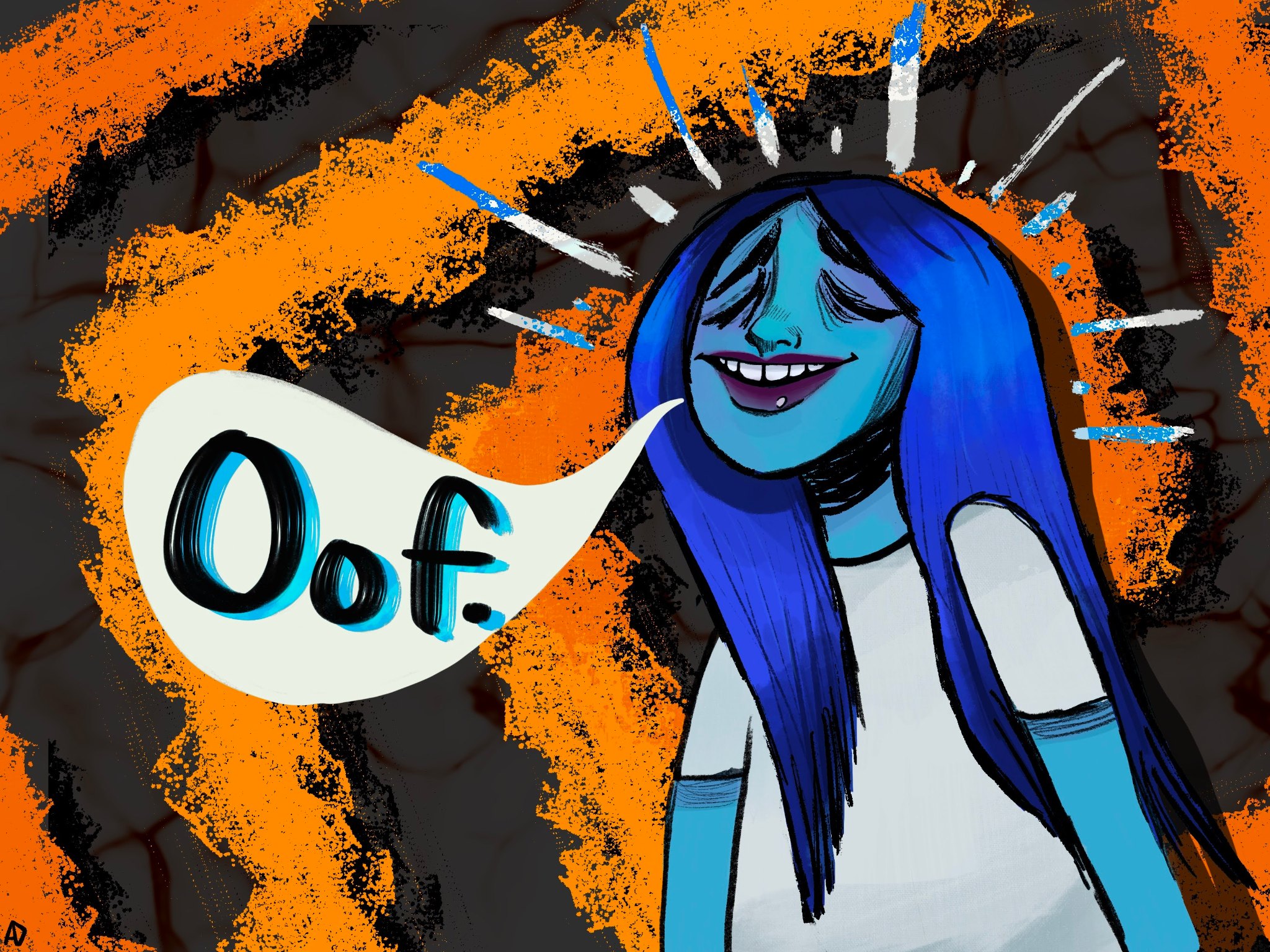 The symptoms started slowly. I hardly noticed them, it was easy to brush off.

It began in the early months of 2016. I’d wake up in a cold sweat, despite having my air conditioner blasting arctic winds less than two meters from my bed. Even in the middle of winter, the centre of my torso felt like a sun radiating heat to every part of my body. You could have fried an egg on my chest. (Please don’t, that sounds gross and I hate eggs.)

After a few months of this, my hands started to swell. I had always had clammy hands, but now they were like two hot Capri Suns left in the back of a car. They looked like angry red starfish, only blimped up in anaphylaxis. It hurt to bend them, and they were constantly sweaty. I’d have spontaneous cuts develop, and I constantly felt an electric current pass through from shoulder to fingertip. I told my doctors that it felt like my hands were screaming. Heck, I wanted to scream.

“You’re thinner than the last time we saw each other,” said one, concerned and with eyebrows raised.

I anxiously shifted my boney butt in my seat. I knew that I was melting rapidly. In the span of a year, I’d lost over 100 pounds. I was swimming in my own clothes. I’d been telling them that I was losing weight too quickly, but since I had been overweight when it started, my doctors praised my quick weight loss—and even asked for tips.

It wasn’t until I started looking like a bobble-head that folks began sending me for more invasive tests.

“Oh hmm,” said my doctor. “You know, wait. It’s probably nothing, but we’re going to want to watch your red blood cells.”

“Watch them? What do you mean?” Were they going to put on a performative art display for us?

“Well, I don’t want to alarm you,” he said, alarming me. “But your red blood cells are dangerously high. That’s probably why you’ve been experiencing a variety of weird symptoms.”

“Is it possibly due to the medication I’m on?”

He gave me a look of gentle concern but his eyes said, oh honey, you poor dumb thing.

“I’m sending you to a hematologist oncologist,” he said, “I think you have polycythemia vera primary.”

Despite my hypochondria-fueled pseudo-medical degree courtesy of Google, that level of medical terminology was lost on me.

“It’s a form of blood cancer.”

My anxiety started brainstorming horror stories like an eighties screenwriter vacuuming down a metric tonne of coke. Is this because you never took yoga seriously enough? Was it all the lead paint you chewed off your crib when you were a baby? Oh god, was it the time you fell off your bike and didn’t clean the road rash well enough?

You’re going to eat a lot of chocolate, drink a little bit too much red wine, and gorge yourself on chips. Maybe even chocolate on chips. If I wasn’t dying, I’d probably make a million dollars, you’ll say to yourself about your monstrous new culinary invention, the hybrid chocolate-potato chip topped with spinach dip. You take another bite. It’s terrible, but you don’t have much time to eat your favourite foods so you keep chewing. The mutant chip is now soggy from tears.

Your dog looks a little bit concerned for your safety, or maybe just upset that he’s not privy to eating such abominable delicacies. Who knows?

Professionals might call this stage “sudden and acute depression”, but I prefer to call it by it’s Christian name, “Fuck It”. It’s an intense period of binging of whimsical self-indulgence fueled by a sense of impending doom.

No need to clean the house when your days are numbered! Fuck it, it’s all pointless anyways. We’re all just skeletons walking in vulnerable meat suits driven by a sugar-powered lump of fat sitting in the dark of a bone cave. What good will budgeting for retirement do now?

People in traffic are especially annoying to you. Sure, you’re just heading to the movie theatre, but damn it! Don’t they know you’re literally dying? Get out of the way, slow walker!

You’ll want to fight your brain. Sadly, you can’t unless you intend to give yourself a stroke and by golly, your condition already means you’re at an incredibly high risk of having one already. As much as you want to run far away from your brain, you can’t evict it from your skull. Instead, you start charging it rent in the form of late nights, bad food and too little water.

One by one, your friends gently express concern for you. They suggest enjoying life more, finding purpose in the absurd. You grunt from the goblin couch nest you’ve made. You’re a trash pharoah, ready to be buried with all the garbage you love, wearing your most regally stained sweatpants.

Your friends keep recommending books and TED talks. You threaten to spontaneously combust if one more person suggests you read Camus’ The Myth of Sisyphus. Secretly, you read your favourite Buddhist authors at night when you can’t sleep. You promise your friends you won’t get really into Buddhism.

Stage 3: Get really into Buddhism.

No one is surprised. Your friend tells you to stop with your “Buddhist bullshit”, and you respond that anger isn’t a feeling you experience anymore. You’re enlightened now, so you don’t feel fear or resentment like you used to. Your friend points out that it sounds less like being Buddhist and more like suppressing emotions.

You repeat a loving kindness mantra, much to his frustration.

This might be worse than the previous, angstier phases.

There’s a strong chance you might die sooner than your friends, or your family, or your dog. You might never get to watch the last Star Wars movie, or live to see the sunrise once more. What’s worse is that you might suffer physically, more than you are in your current state of perpetual swelling and sweat.

But aren’t we all going to die at some point?

You’ve stopped asking yourself, “why me?” and instead ask, “why not me?”. There were legions of impressive, kind, and wonderful people who’ve died before they felt ready. You might be one of them (albeit a rather average member of that club) but who says you were ever entitled to live to the ripe age of 89?

You go on more walks now. You bring your headphones but don’t wear them. On these walks, the trees look serene and oddly human. You start taking pictures of the clouds, the sparrows peeking through chain fences, and flowers growing through the cracks in concrete. You start sincerely apologizing to your friends more, and work to feel more comfortable telling them “I love you”.

On a walk, a small dog excitedly rushes to see you and you find yourself laughing at its joy. You haven’t laughed in a few weeks, at least not out of genuine good humor.

Things feel better. That is, until you get a call from the hematologist-oncologist’s office.

It’s time to meet the doctor.

The doctor is a stern man who looks like he could star in French cinema instead of a highly specialized medical practice. Your mother is with you, because she’s worried about you. It makes you feel a little ashamed and embarrassed, like you’re defective and a nuisance. Still, you’re grateful. I’m grateful.

The first words out of his mouth aren’t “hello” or “thank you for coming”. Instead, he takes a silent look at me, then turns to my mom.

“Is he always this red in the face?”

Ouch. Did he get talking points from my high school bullies? She nervously tells him that I've always been very flushed.

He seizes me up again. I feel the sweat pooling behind my knees. I didn’t realize how nervous I’d be to hear his professional opinion.

My mother lets out a sigh of relief that she’s been holding onto for seven months. I’m not quite sure I’ve heard him correctly.

“Yes, you have polycythemia vera but not primary. Secondary. Secondary!” The doctor grumbles, “Why the other doctor ever wrote primary here, I don’t know. It just caused you concern and fear, no doubt.”

I’m still in shock. Am I on some sort of Truman Show? Am I being Punk’d?

The treatment is one from the history textbooks, good ol’ fashioned bloodletting. For the rest of my life, I’ll have to go every few weeks to have 500 millilitres of blood removed (the size of a medium coffee at Starbucks, delicious). If I skip it, I will experience a progressive worsening of symptoms and the very real possibility of a stroke. If I go too often, I risk becoming dangerously iron deficient. I felt like I was balancing a budget, only for a vampire.

My brush with death might not have been real, and might have been a horrible prank orchestrated between my blood cells and my doctor, however I’ve come from the brink. Besides the little bruises and scars from nurses fighting to find my veins during my regular “bleedings” (as we say in French), I hold a certain truth close to my heart.

We are never promised the future. The sun might not come up on tomorrow for me, but I can certainly enjoy the slow fading hues of the sunset right now.