For many, wheels have been a recurrent symbol of freedom. The feminist history of the bicycle is fairly well-known; in short, as cycling became a safer and more accessible pastime, women took up cycling en masse. It became popular among suffragettes, to the point that "woman is riding to suffrage on the bicycle" became an oft-quoted phrase in newspapers at the time. Though we often consider the bicycle as a tool for the protestors of the past, it remains a useful and sometimes fraught resource for women and activists at large; Iranian women routinely protest against misogynistic cycling bans on women, and Black Lives Matters protestors have recently used the mass presence of cyclists to block off roads in New York City.

As strong as the link between cycling and liberation is, it can sometimes feel like bikes get all the political press. There are stories of independence and activism baked into the development of all forms of transportation and wheel-based sports. This essay series will explore the different political and recreational ways that marginalized people, and particularly women, have interacted with wheels over the years—starting with roller skating.

If you’ve been on TikTok or Instagram recently, you may have noticed a lot of videos of carefree young women and teenagers roller skating dreamily to chill-hop, often backwards, spinning and sliding effortlessly and generally making the whole operation look much, much easier than it is (take it from someone who failed out of roller derby boot camp). Roller skating as a concept stretches back centuries, and the early versions were decidedly more frumpy and inelegant than a modern skate. As later versions became easier to handle, skates became increasingly popular, and a “skate craze” of the late 1800s saw the establishment of hundreds of roller rinks across the US and further afield.

In the UK, suffragettes adopted skates on at least one occasion as part of a protest against women’s disenfranchisement through the tax system. In 1911, a large group of suffragettes, including Emmeline Pankhurst, hired and hid out in a London skating rink to avoid the census, a part of a national mass evasion campaign under the slogan "we don't count; we won't be counted.” Marie Lawson, a prominent figure in one of the participating organisations, later said:

“We had roller skates and we spent the night on roller skates and there was no-one to declare us [...] we felt we had done the government out of so many names on the census resistance. It wasn’t very useful really but it was something to do. We used to grab at every little thing, you know, that we could make a protest about. It was advertising really.”

In the US, roller rinks have historically been sites of exclusion and oppression for Black Americans. Segregation laws included banning or limiting African-American people’s access to amusement parks and leisure facilities, including swimming pools, dance halls, and roller rinks. Attempts to occupy these spaces and incorporate skating into protest have consequently been a common form of resistance from Black protestors in the US and elsewhere. One of the most well-known rolling protestors was 27-year-old Ledger Smith, who in 1967 skated from Chicago to Washington in ten days to join the March on Washington for Jobs and Freedom called by Martin Luther King, wearing a placard reading "I'm skating to Washington for Civil Rights.” 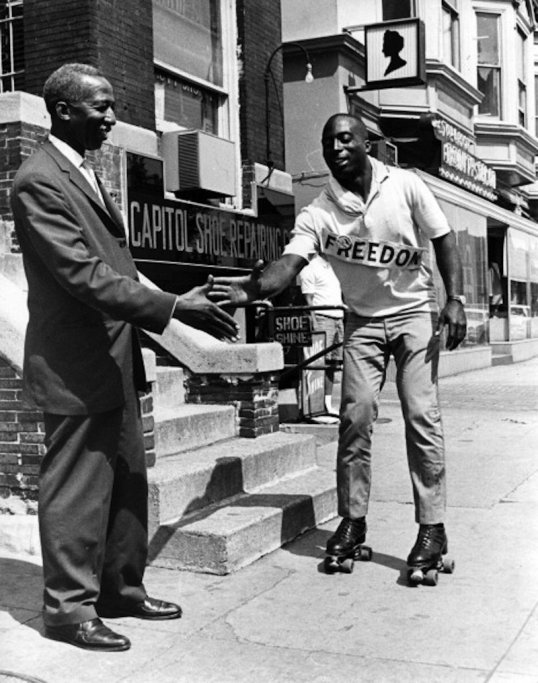 Ledger Smith shakes hands with H. Carl Moultie, vice president of the DC NAACP, as he makes his ten-day trip to join the March on Washington.

For many, rollerskating will always be associated with the disco area of the seventies, when roller skate popularity was at a national peak in the United States. But it is the Black skaters of the largely segregated rinks in the 1960’s who pioneered the style of artistic skating (skating focused on movement and dance) that has inspired today’s TikToks. Even after formal segregation ended, Black skaters were often pushed into only attending Black-only rink nights. Although it was protested, it also gave way to Black Americans establishing the roller rink as a vibrant social space for adults and centres of culture in their own right. They served as venues for rappers and DJs who were ignored by racist mainstream bookers, and are often credited with supporting the early careers of NWA, Dr. Dre and Queen Latifah.

While many roller rinks closed between the nineties and the 2000s, Black roller skating communities are still prevalent across North America, explored in detail in the recent films ‘United Skates’ by Tina Brown and Dyana Winkler and Kate Hickey’s Roller Dreams. The young Black skaters of today have noted in recent articles about skating’s digital revival that the overly white online skating scene is not representative of their own experiences with the sport and that their contributions to these communities are frequently ignored. One skater, Faeiryne, told Mashable, "The people who are the face of the skating movement right now have nothing to do with us at this point. And until people educate themselves, it won't do Black skaters any good."

Montreal’s own skate scene is known not for its dancers, but its fighters. Roller derby is a sport with an almost self-evident feminist history; Margot Atwell, author of Derby Life: A Crash Course in the Incredible Sport of Roller Derby, once said that "feminism is the DNA of the sport." It’s a high-speed, high-contact game dominated by women and queer people that manages to be fairly brutal while also fostering a family-friendly atmosphere at games. Its history stretches back to the 1930’s, and while its modern feminist form comes from the Y2K revival, it was a popular sport among working-class women throughout the later 20th century. 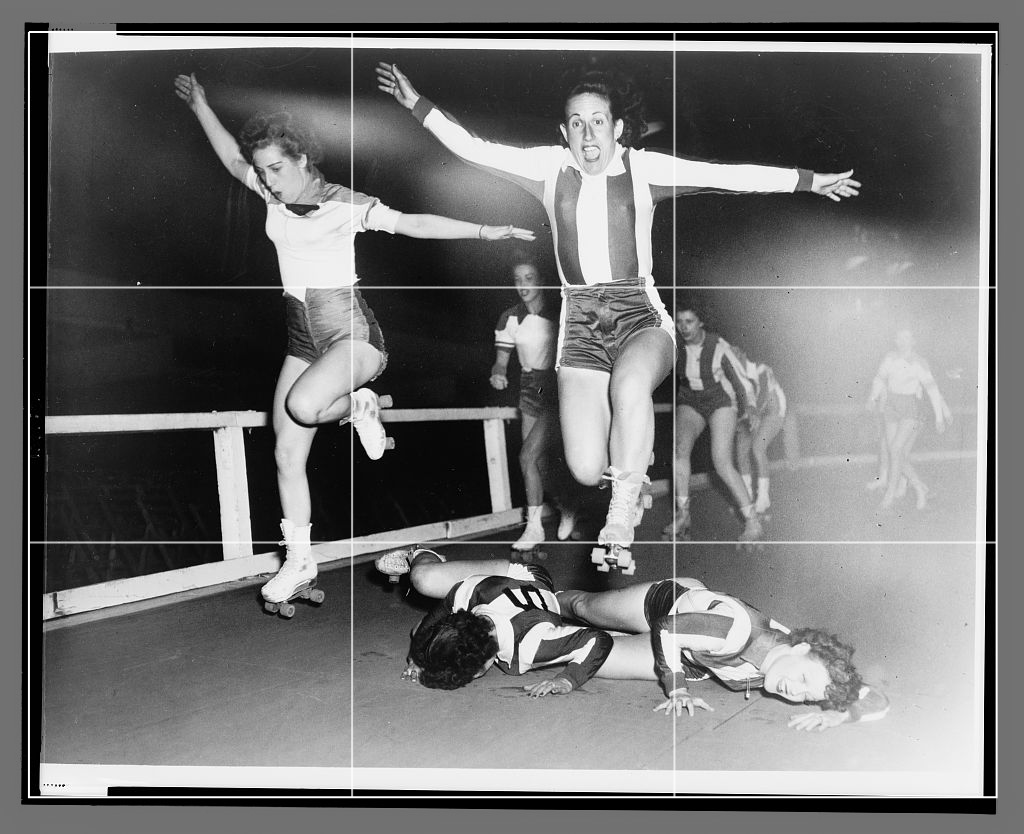 Roller derby was originally conceived by a Depression-era hustler called Leo Seltzer, who had had great success selling tickets for danceathons and had been looking for another viable gimmick. He sold tickets to long-distance roller skating events in 1935, in which skaters raced each other around a track, usually in mixed-gender teams. Within a few years, the contact sport potential of roller skating had been realized and Seltzer began to develop the game of roller derby. It gained some television prominence in the 1940s, and grew continually in popularity through the decades, hitting a rapid decline in the seventies as a number of different roller derby entertainment companies collapsed. Without a robust backing from sponsors, the sport was a goner. Cultural historian Paul Fussell unintentionally hit on a gendered hurdle for the sport’s enthusiasts by identifying its lack of popularity with advertisers in a 1983 analysis of the US class system:

“Roller Derby [was] once popular with advertisers until they discovered that the people watching it were so low-prole or even destitute that they constituted an entirely wasted audience for the commercials: they couldn't buy anything at all, not even detergents, antacids, and beer. "Low-Reach Undesirables," the Roller Derby audience became known in the trade, and the event that had attracted them was soon removed from television." 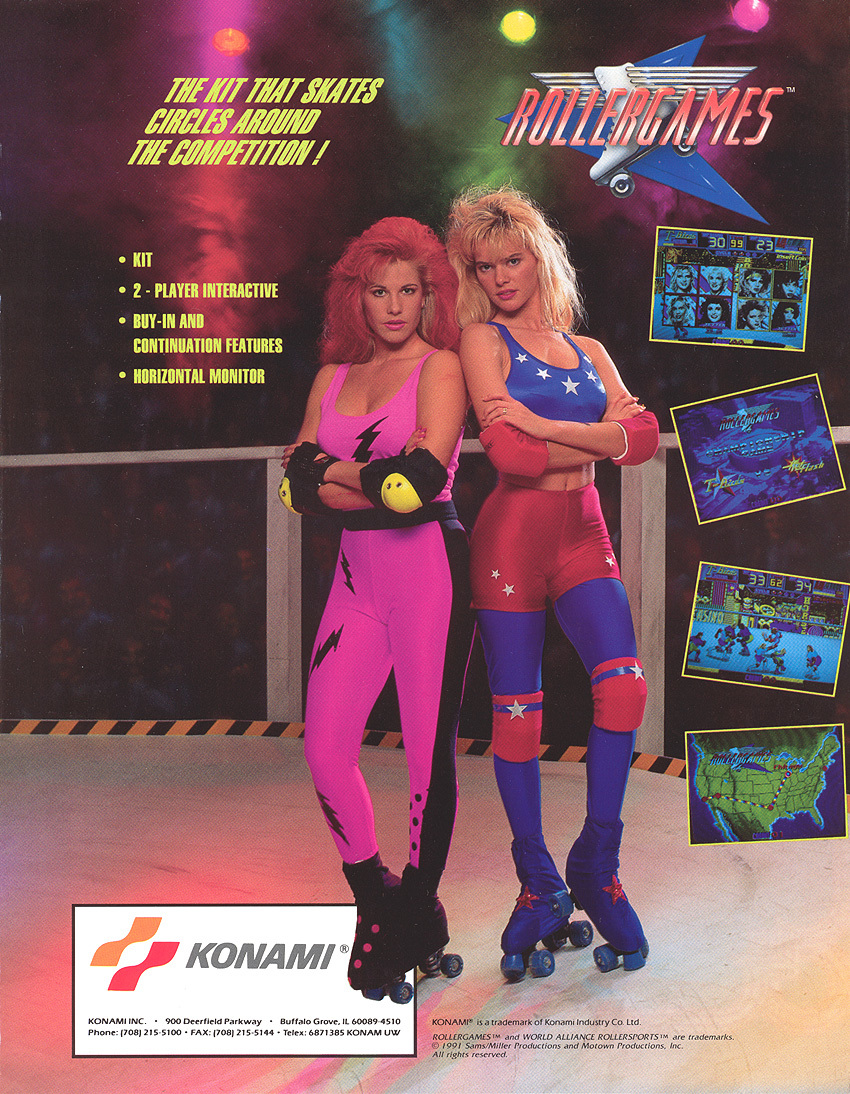 Roller derby was a surprisingly popular televised sport that was watched by many from the 1960’s onwards, albeit often presented in an exploitative or sexist way. RollerGames was a competitive roller derby TV show that ran from 1961-1975, often incorporating wrestling-style storylines and gimmicky features such as an alligator pit in the middle of the derby ring. This is a flyer for the arcade game adaption of the show. Image credit: Wikipedia.

While there were multiple attempts to revive the roller derby audience in the late 20th century through Gladiator-style televised competitive games such as RollerGames and RollerJam, which took their aesthetic cues from serialized wrestling shows, it wasn’t until the millennium that things really took off. With a taste for the chaotic and counter-cultural, archetypal Gen X-er Daniel "Devil Dan" Policarpo attempted in the early 2000s to recruit a number of women for a violent, anarchic version of roller derby,  “a crazy circus with these clowns unfortunately stabbing each other, these bears on fire on these unicycles.” He managed to gather enough roller skating women in a bar in Austin to pitch the idea, but they were unwilling to work with him.

Policarpo was allegedly run out of town, but the skaters went on to spread the gospel of derby far and wide. The Women’s Flat Track Derby Association was established in 2004, and roller derby rapidly transformed into the feminist, women and queer centered sport that it is today. Its punky, loudmouthed, DIY spirit is part of what attracts the crowd; the aesthetics and musical backing of most roller derby games have a clear third-wave feminist styling. In recent years, there has been a push to recognize racist and transphobic shortcomings in the scene through the establishment of teams like Team Indigenous and Jewish Roller Derby and shows of public support for trans players.

Here, the Montreal Roller Derby league was founded in 2006, and is home to several different teams, including The New Skids on the Block, Les Sexpos, La Racaille, and Les Contrabanditas. In non-pandemic times, all of the MRD teams compete against one another and with other teams across Canada, in the queerest sporting events that the city has to offer. Central to the scene is Lowlife at 6001 Papineau, a brightly coloured hideaway of a skate shop staffed by members of the derby teams and two exceedingly cute dogs.

Roller skating has provided a home and a sanctuary to so many different communities in its storied history. Though it may fall out of mainstream fashion again in the future, it will likely remain a tool of creativity, protest, and community within the marginalized and oddball demographics that call it home. 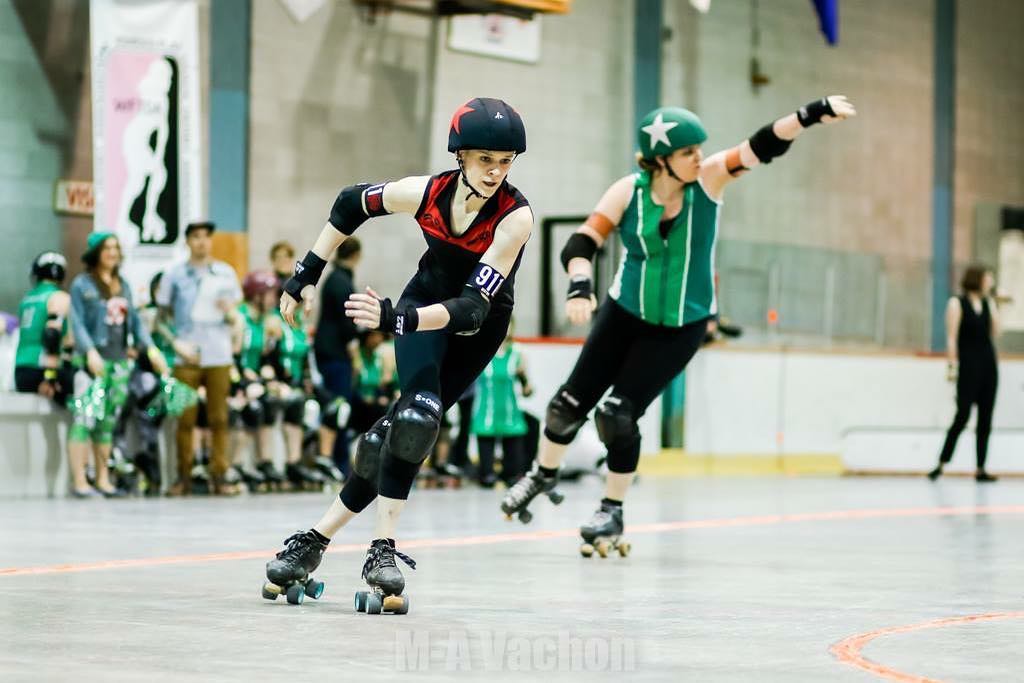