Recently, Feminist made a carousel post on Instagram that stopped my scrolling. It was a photo series of One Direction holding various signs overlayed with sentences that saturate social media. 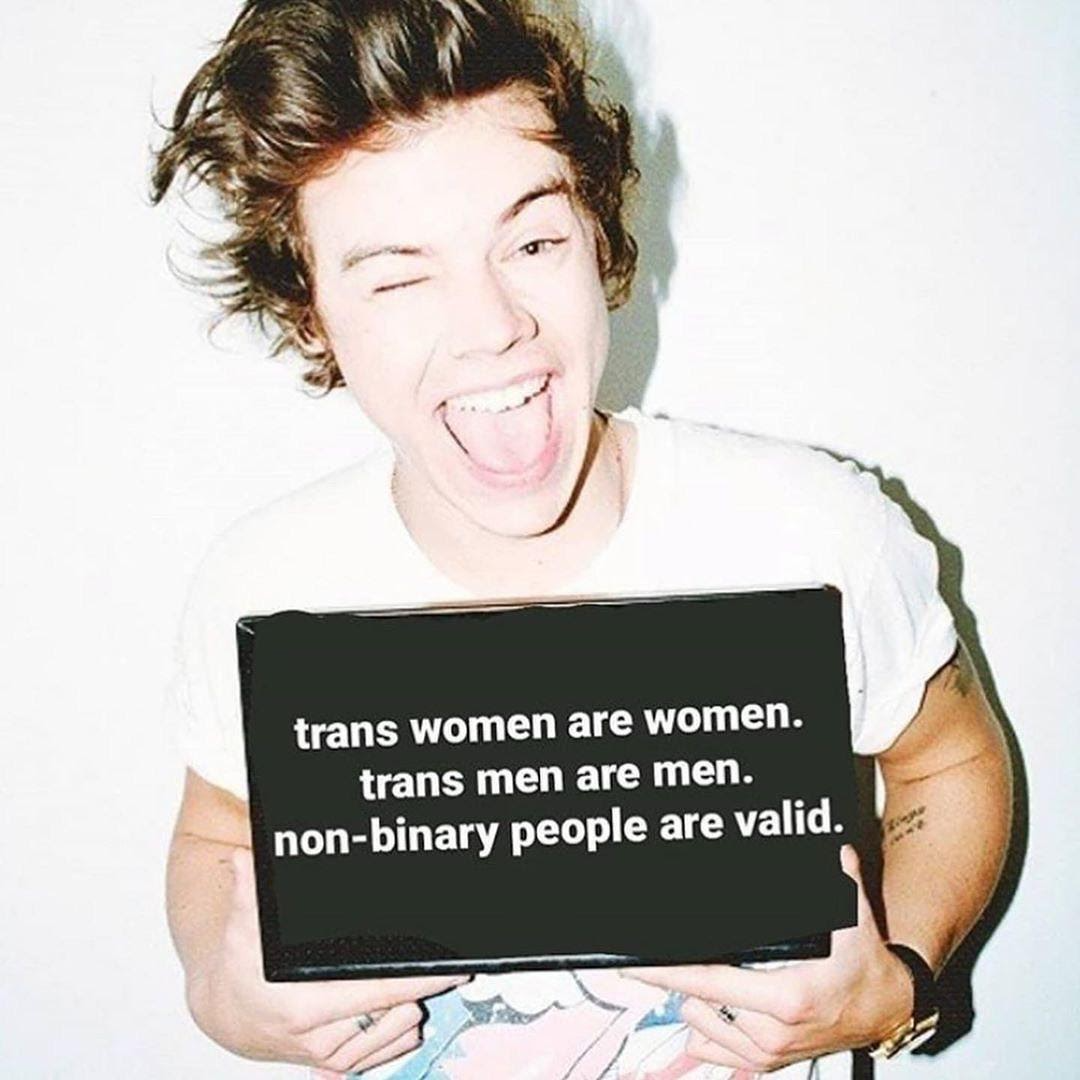 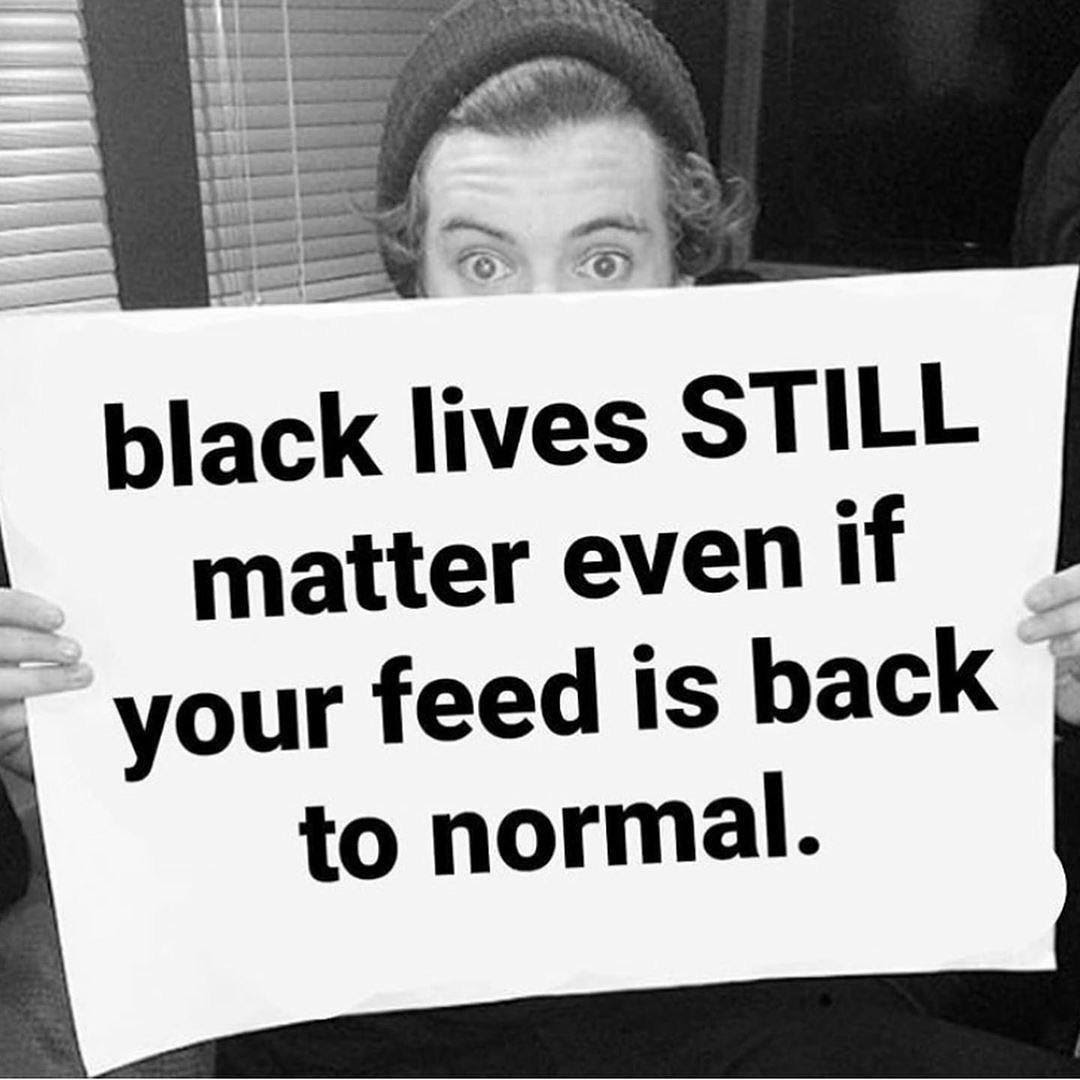 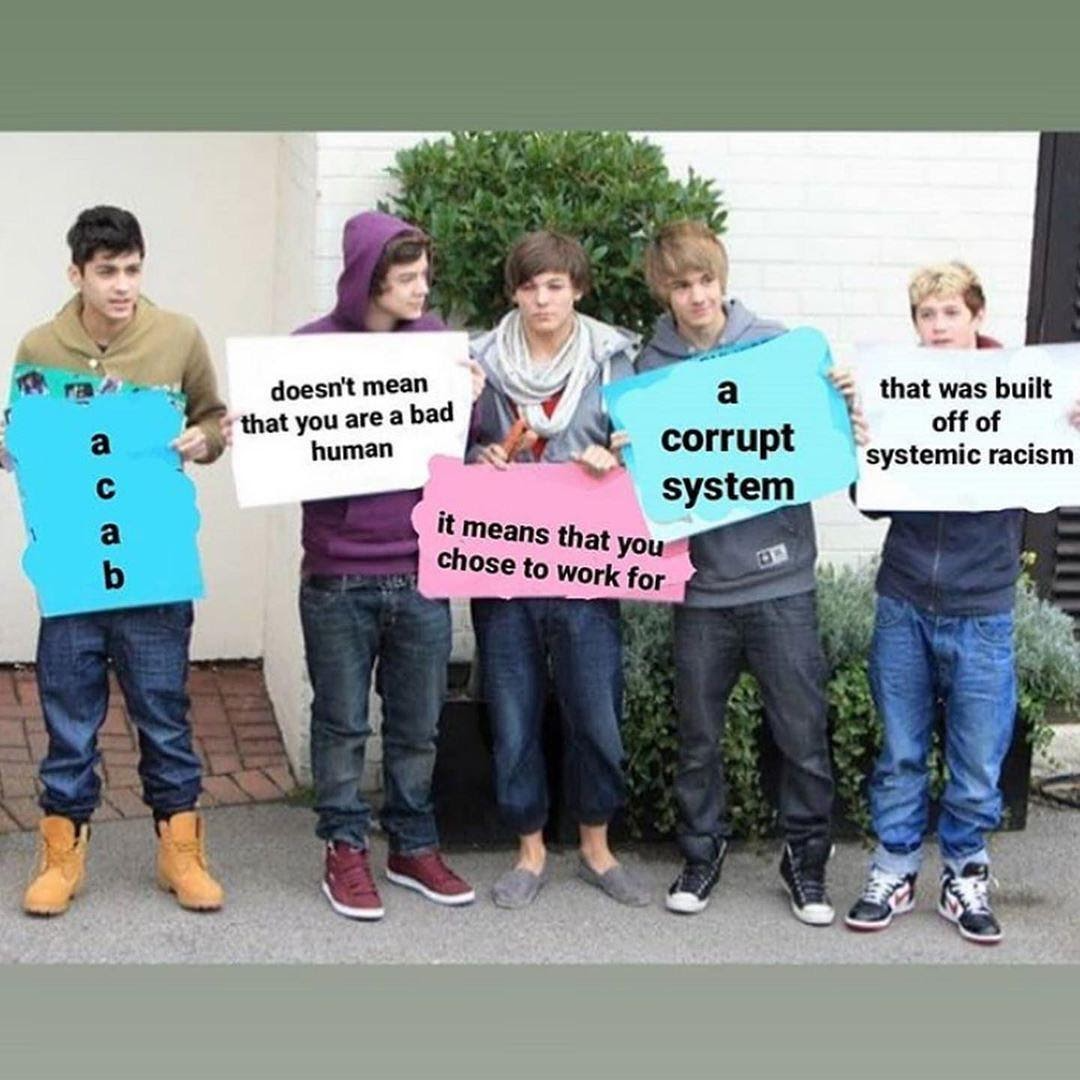 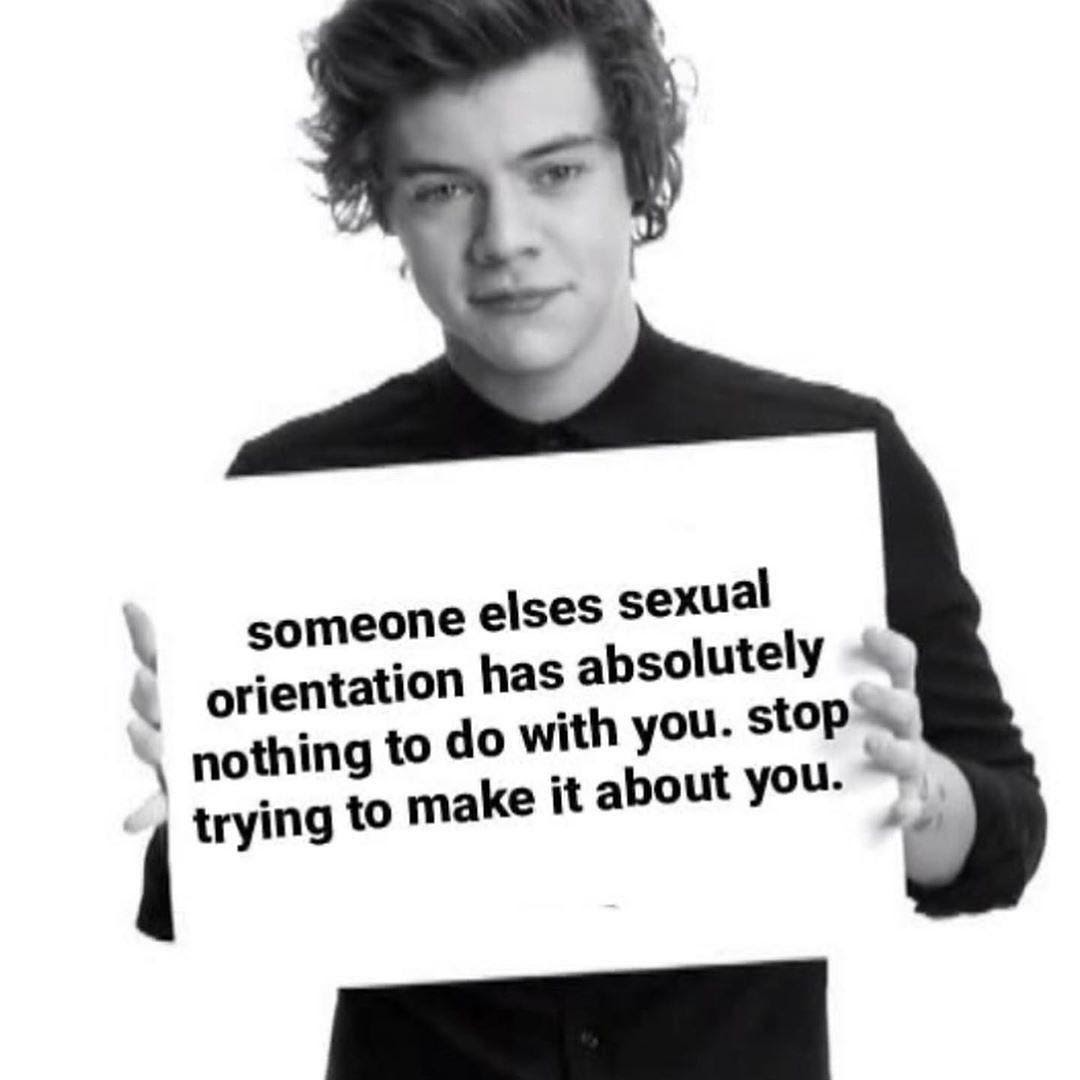 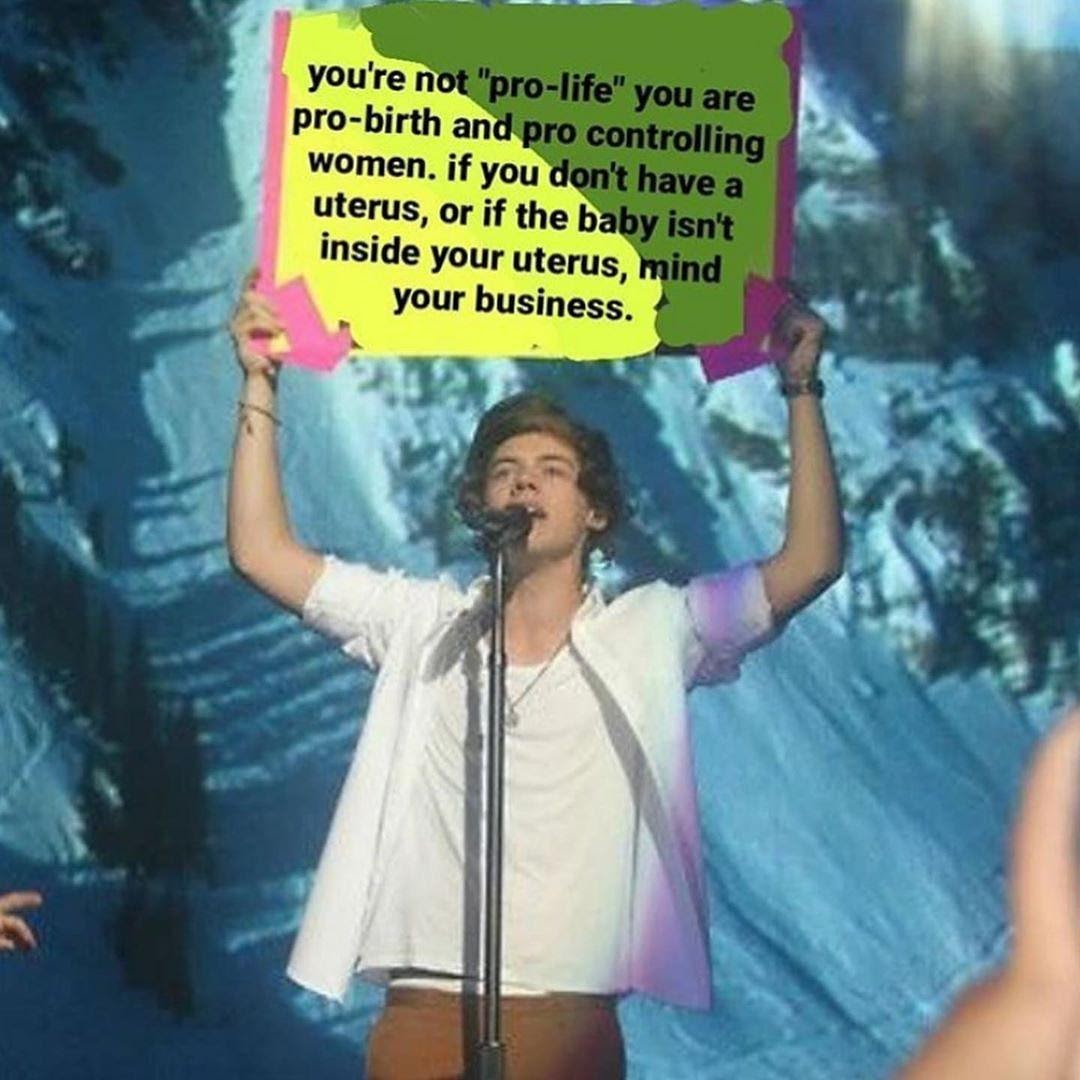 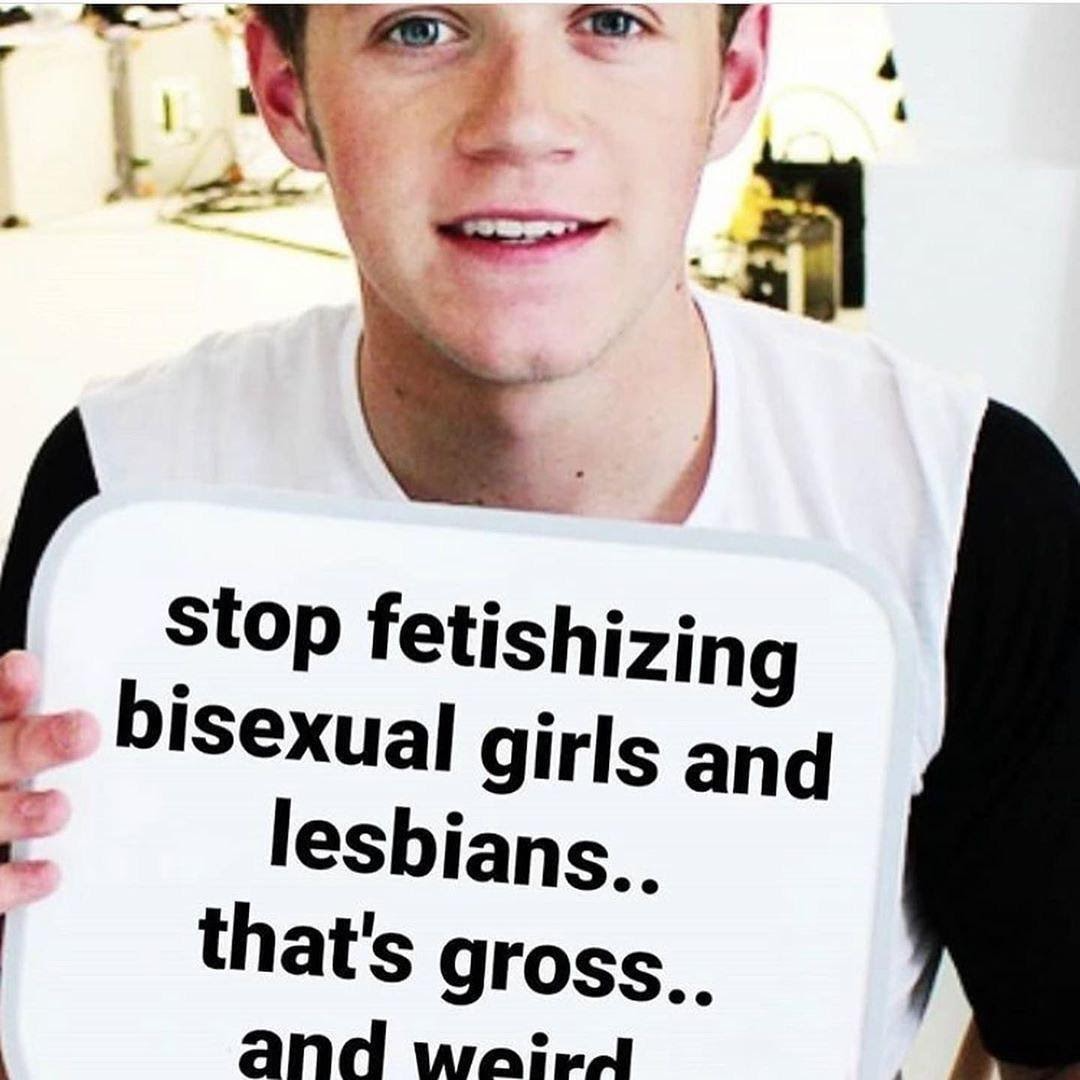 In the carousel post, The One Directioners triumphantly pose with image-edited phrases the Feminist audience is used to reading and sharing. Harry Styles is photographed in glamorous headshots holding signs that read, “Trans women are women. Trans men are men. Non binary people are valid.” In black and white, the teen pop sensation advertises, “Black lives STILL matter even if your feed is back to normal,” and  “Someone else's sexual orientation has absolutely nothing to do with you. Stop trying to make it about you.” Styles is depicted on the stage raising his meme sign above the microphone, “You’re not pro-life, you are pro-birth and pro-controlling women. If you don’t have a uterus, or if the baby isn’t inside your uterus, mind your business.”

The whole pop band candidly gathers together in front of some plants, their poster boards collectively reading, “ACAB doesn’t mean that you are a bad human it means that you choose to work in a corrupt system that was built off of systemic racism.” Niall Horan softly smiles holding up “stop fetishizing bisexual girls and lesbians... that’s gross… and weird...” on a white board.

The result garnered over 540,000 likes. Shared across the platform massively, and receiving lots of comments, these images whipped up an MS paint storm.

I found myself clicking like, then pausing. Then unliking the post. What exactly in this cocktail of image manipulation was appealing to me?

Witnessing these One Direction images with a small group of sentences popping all over the internet felt good. Or rather, familiar. Though I haven’t seen this exact carousel post before, I’ve seen these sentences so many times.

There is a standardization in these images. An immediate recognition. These sentences re-appear again and again on various viral posts, each with its own specific connotation. 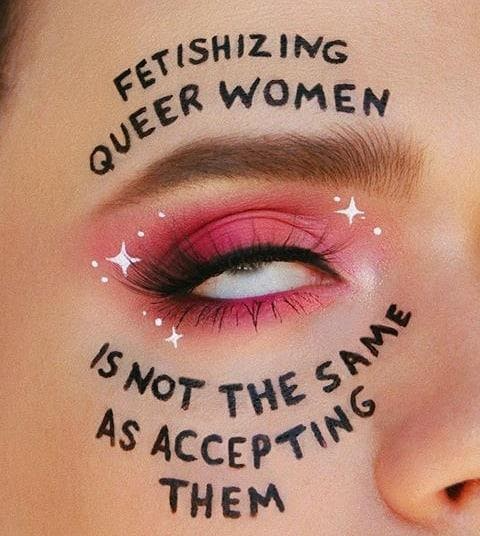 For instance, posts by Matt Bernstien package social justice internet statements on made-up faces, the text written in eye liner pencil. In this example, echoing One Direction’s “feminist” sentiment, “Fetishizing queer women is not the same as accepting them.” 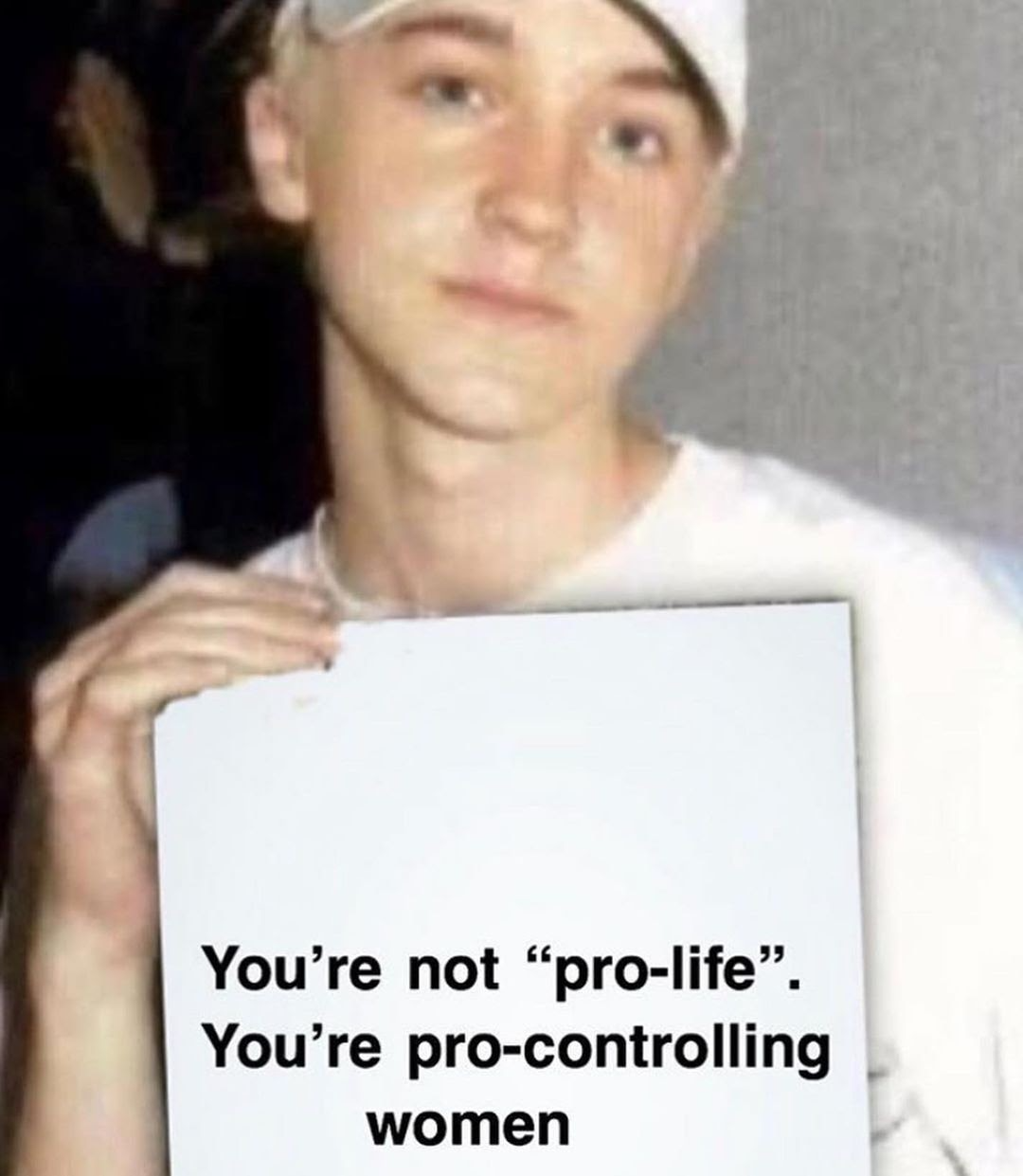 The One Direction carousel is part of a larger meme economy which repeats the same message over thousands of different contexts. These sentences, “Stop fetishizing lesbians,” “ACAB,” “Black lives still matter,” “You are not pro-life you are pro-controlling women,” “Trans women are women,” and others, flood the internet, continuously re-purposed for the most scroll-stopping declaration. 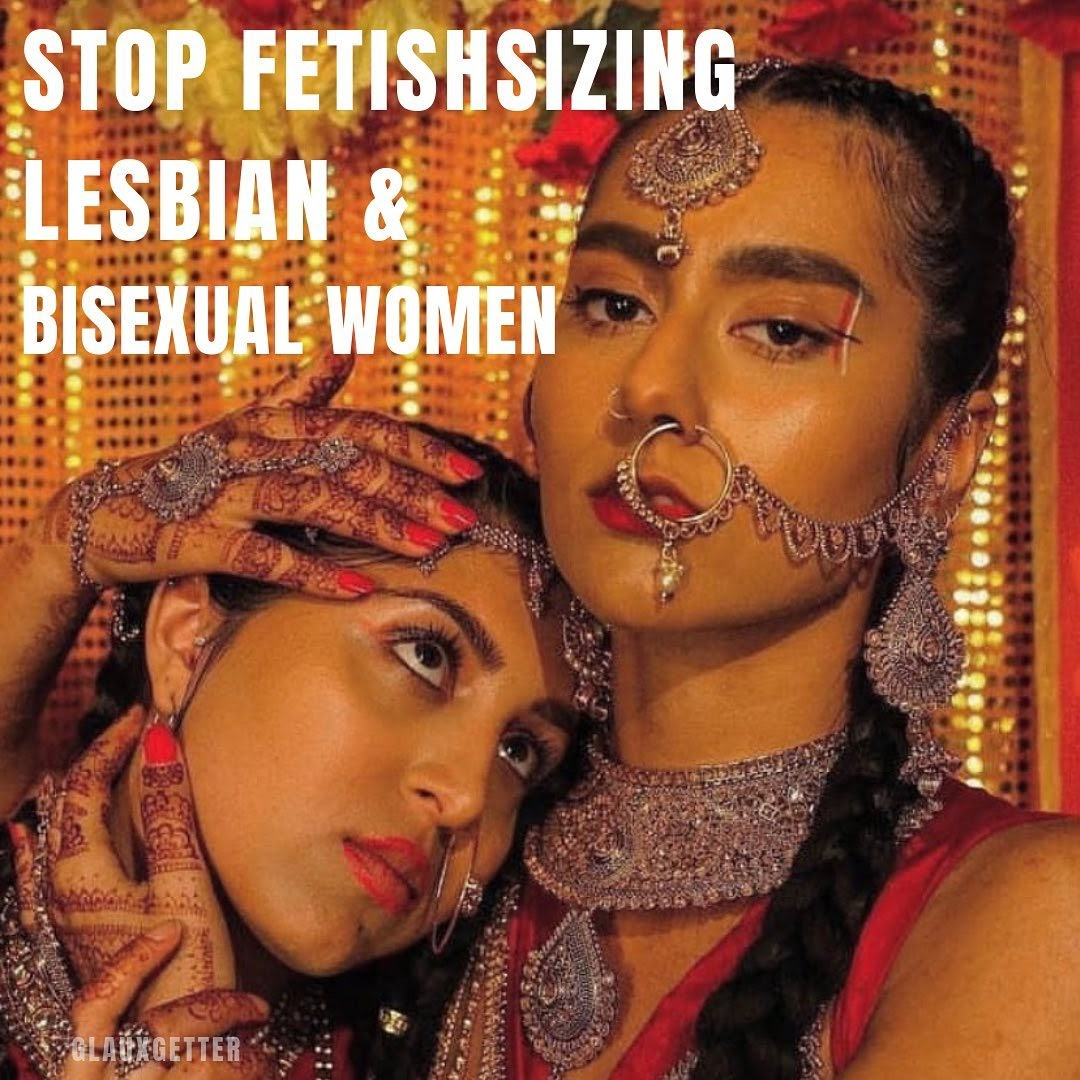 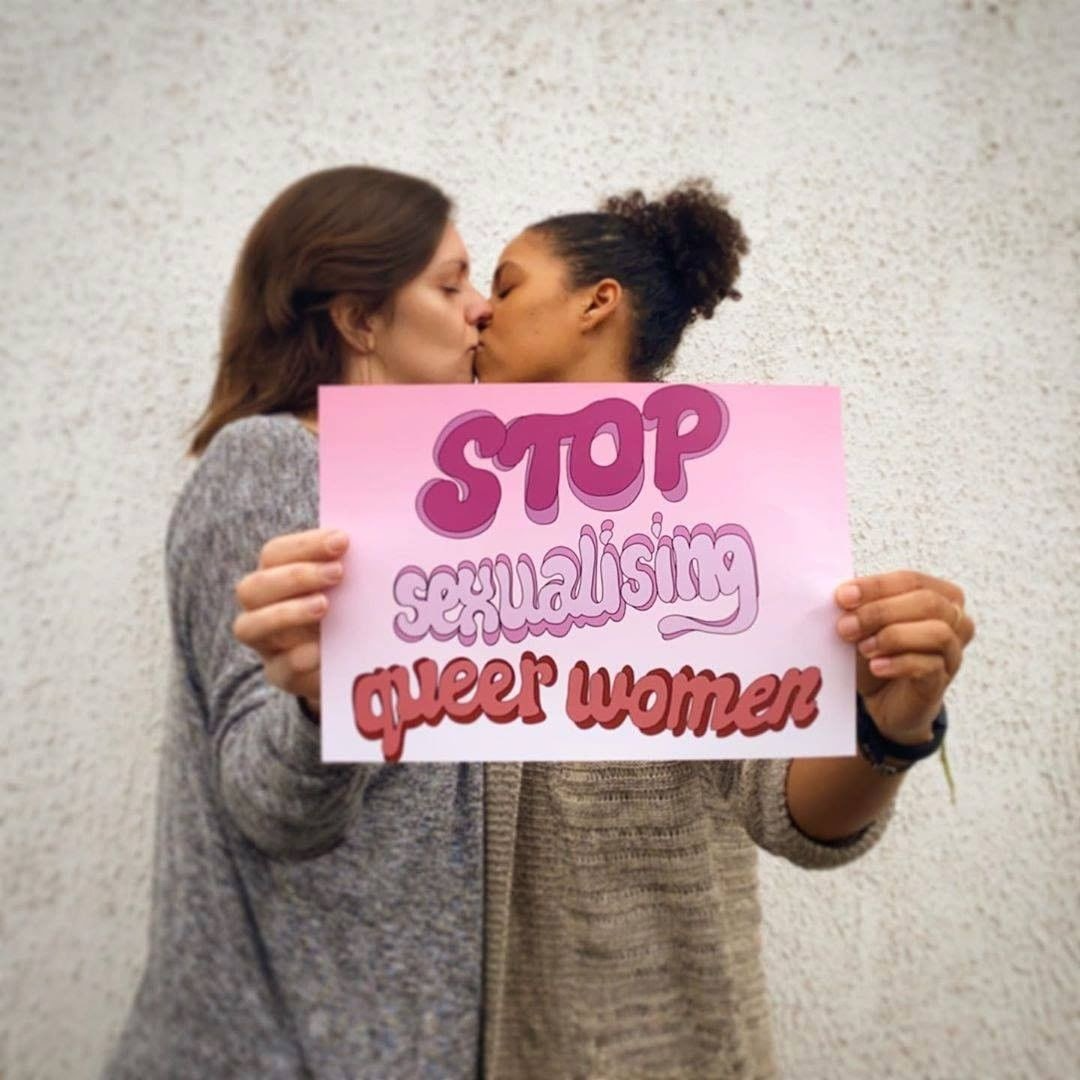 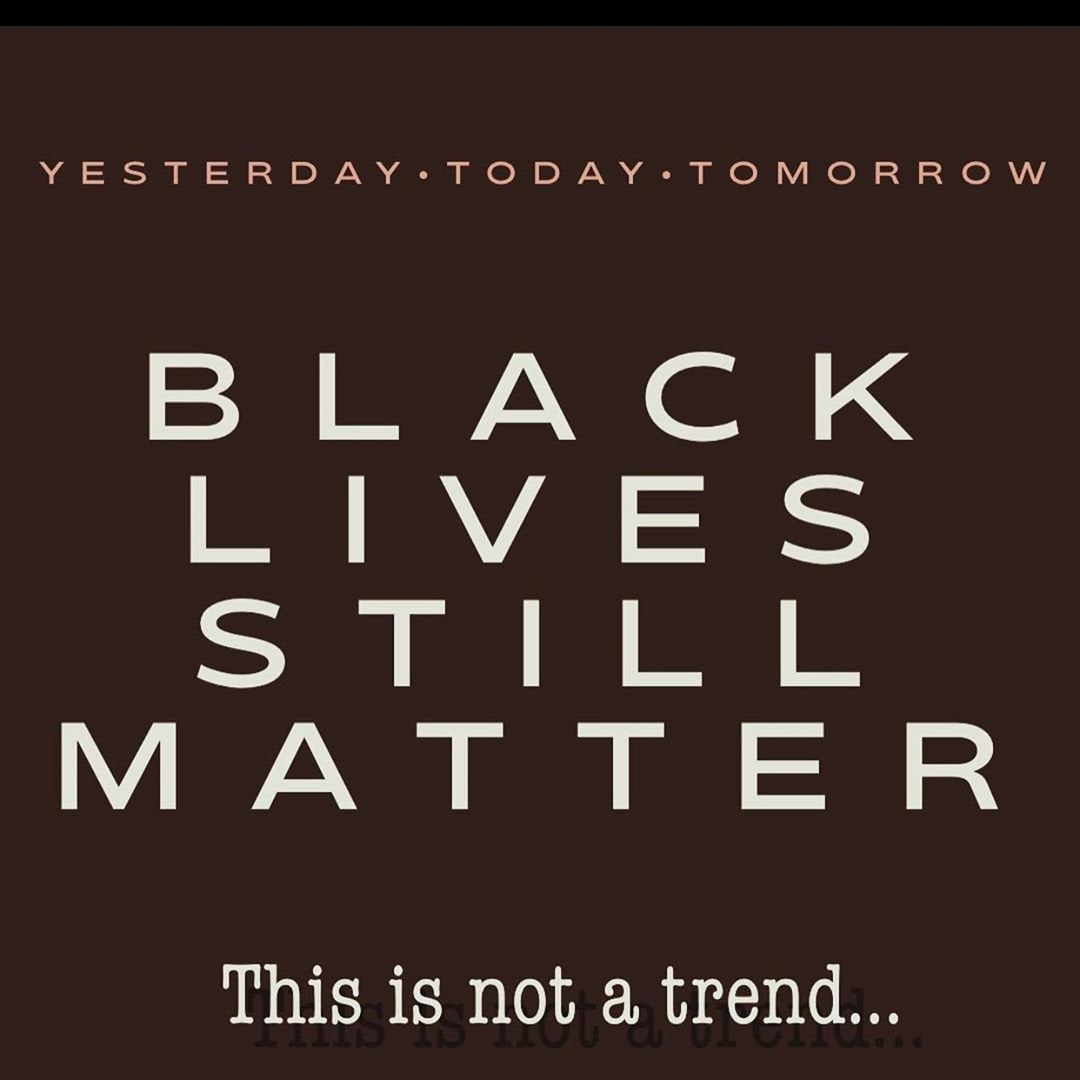 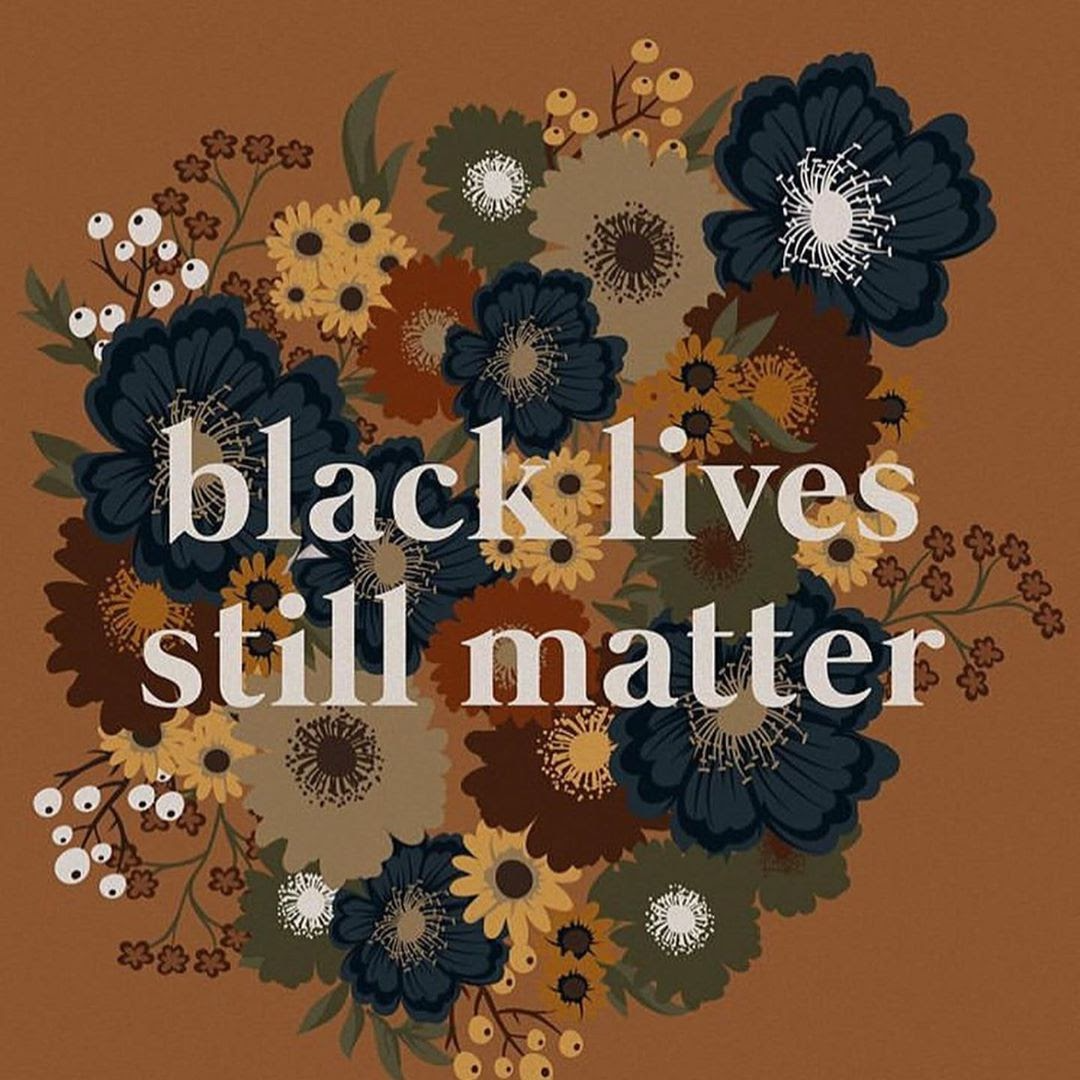 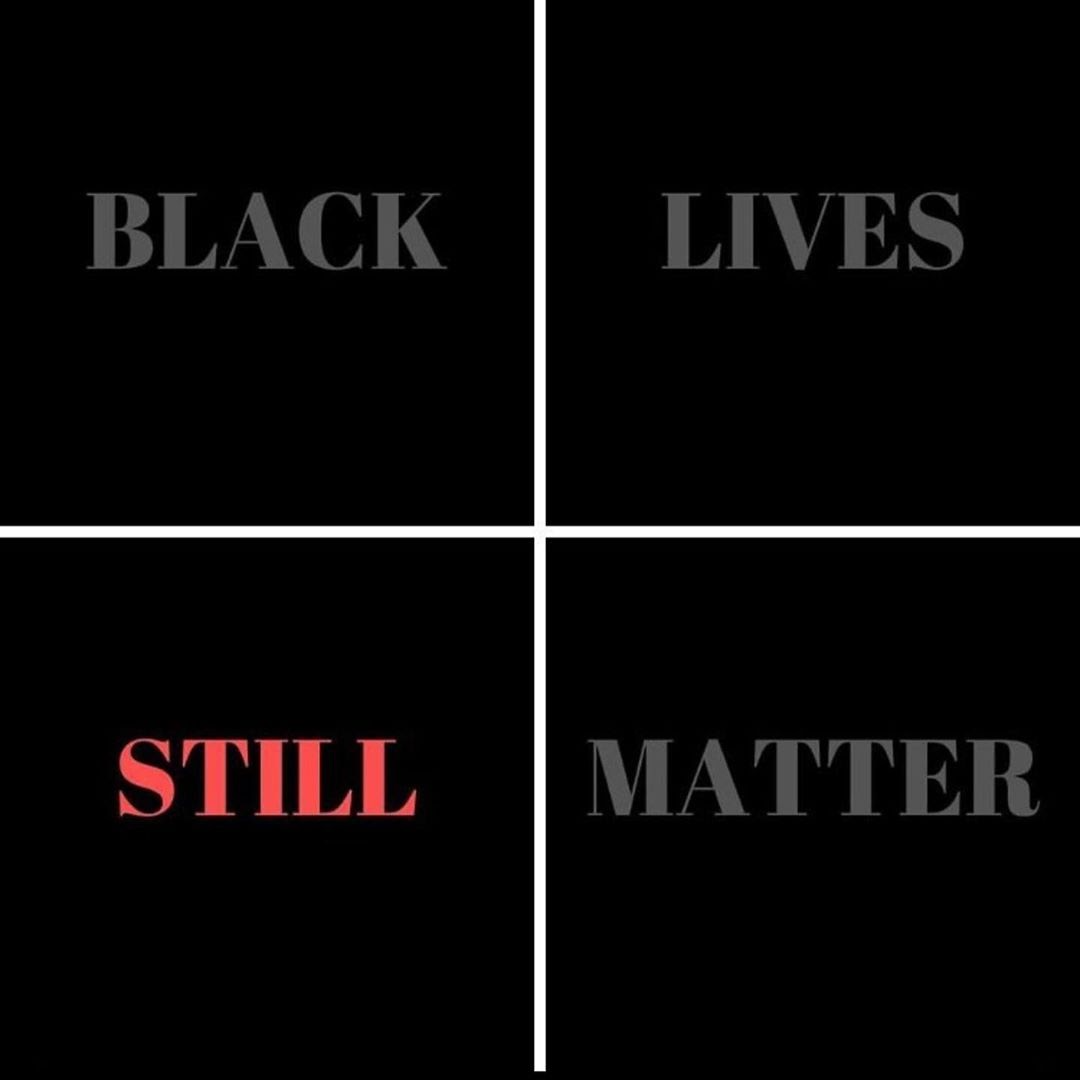 These sentences are little speedy monuments of the moment. Erected and then taken down. They carry a weight of affirmation against a culture that tolerates and trivializes violence against queer and trans people, Black people and people with uteruses. These are tag-lines and markers of acceptable discourse designed for quick sharing. They show where we are in our processing of our current situations amidst uprising, disease and revolt.

These sentences start as incredibly politicized, but now are so wide-spread that they lose meaning. The political mottos are often packaged in cute, salacious, or deliberately amusing ways.  These sentences become juxtaposed with layers of endearment within a recognized aesthetic. Often, these messages are packaged with the presence of celebrities, cartoon characters, Disney princesses or other childish symbolism. 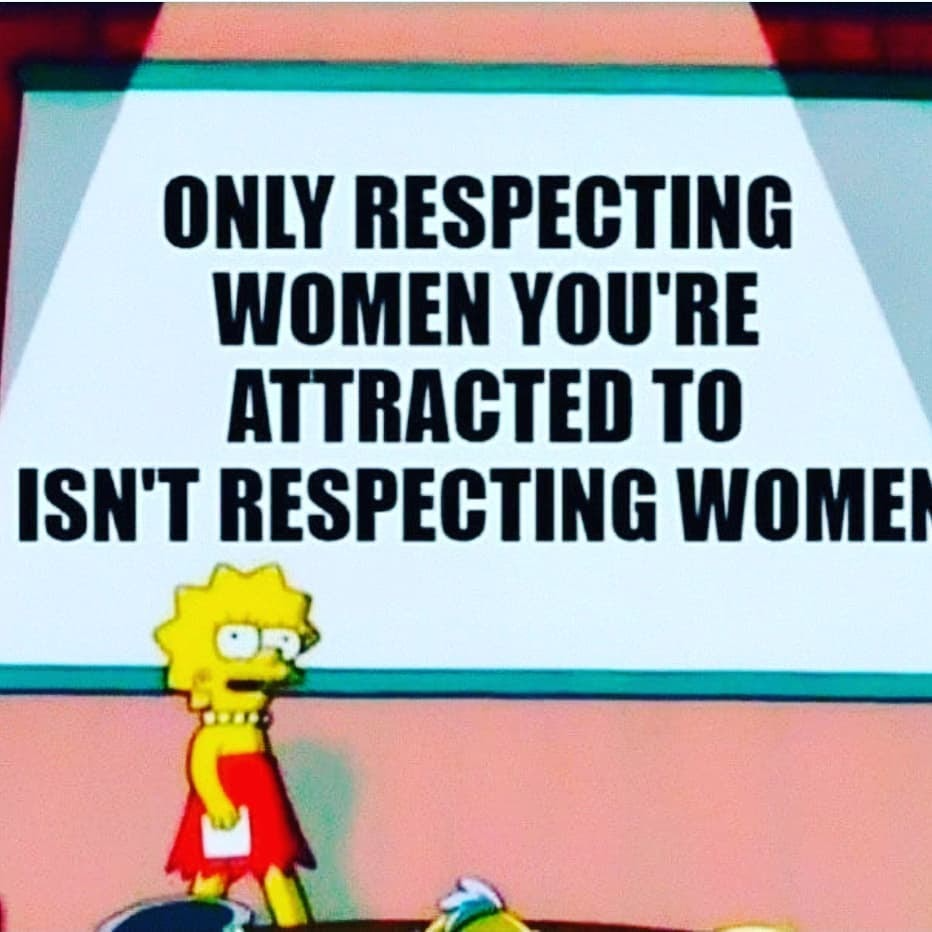 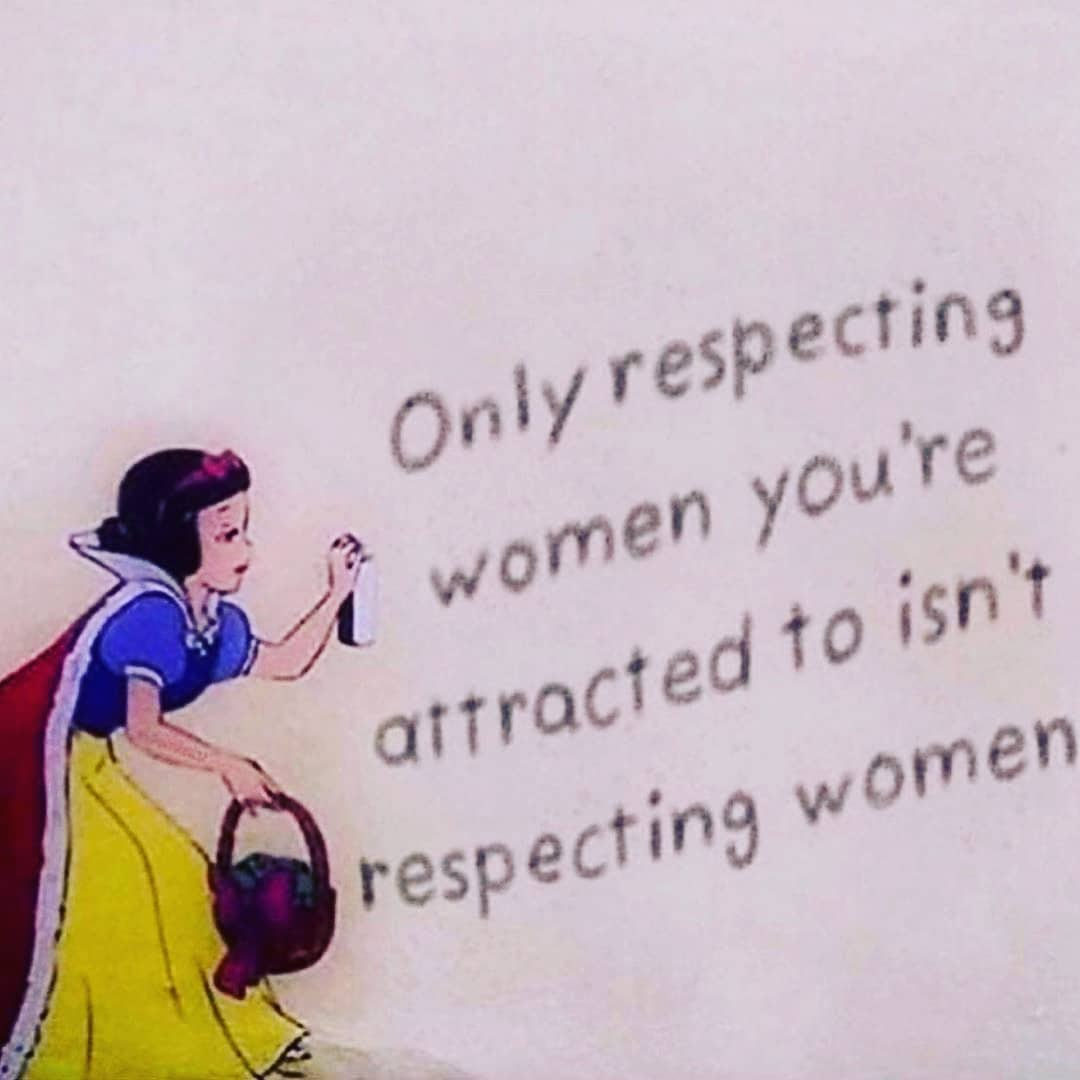 For example, this meme of a straight couple in pink cursive font reads “looking for a gf who listens to Kate Bush, loves frogs, hates cops,” below it says “that’s it hahah <3… hmu srsly”. The combination of the hand-heart, the shutterstock image, and the use of three different fonts, makes the meme light-hearted. This message of “hating cops” speaks to the current movement of “ACAB,” speaks to the subject matter of violence and brutality caused by policing. And yet, this subject matter is designed to be deliberately cute. 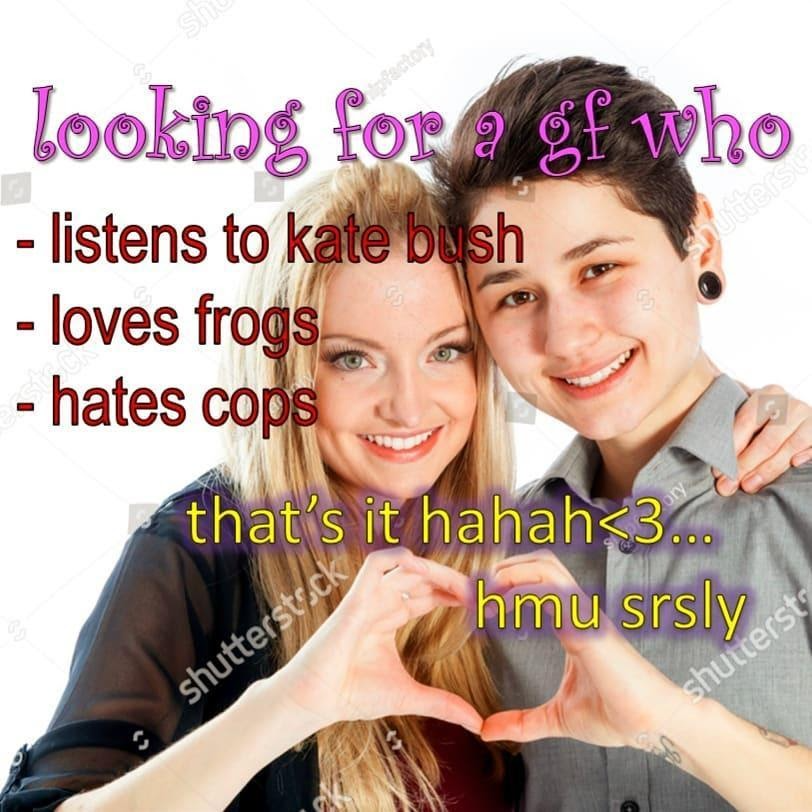 While all of these political memes support education in allyship, activism, and move towards speaking against injustice, the aesthetics that they use are often trivializing the subject matter.

And their message becomes an aesthetic itself. An aesthetic that can be re-appropriated and massively disseminated.

“Stop fetishizing lesbians,” “ACAB,”  or “You’re not pro-life you’re pro controlling women,” becomes an easy nugget to copy and paste en masse, to say out-loud, and to leave without unpacking the realities beyond, between, through and above these sentiments. These memes are always affirming against a culture of violence, and while that is part of the work, we are just left there. There is no space left in them to explore nuance, tension and points for push-back, forgiveness and movements towards.

These phrases are embedded within the format of the meme, which was first meant to show or perform a simplified emotion or package a joke, and now affords ideas meant to describe large concepts, such as themes about transness, queerness Blackness, policing, oppression, immigration, and reproductive rights.  These calls for political revolution and organizing get stunted in a medium designed to be a time capsule for internet culture jokes.

In the “You’re not pro-life, you’re pro-controlling women,” meme, the discourse is packaged as anti-pro-life meme instead of as a pro-choice meme. As this meme is designed to be against the control of reproductive rights, it does not give imagination towards reproductive justice.

Moreover, these reproductive rights memes conflate “woman” with people with uteruses and ultimately leave so little space for criticism or dialogue opening because the memes are declarative. 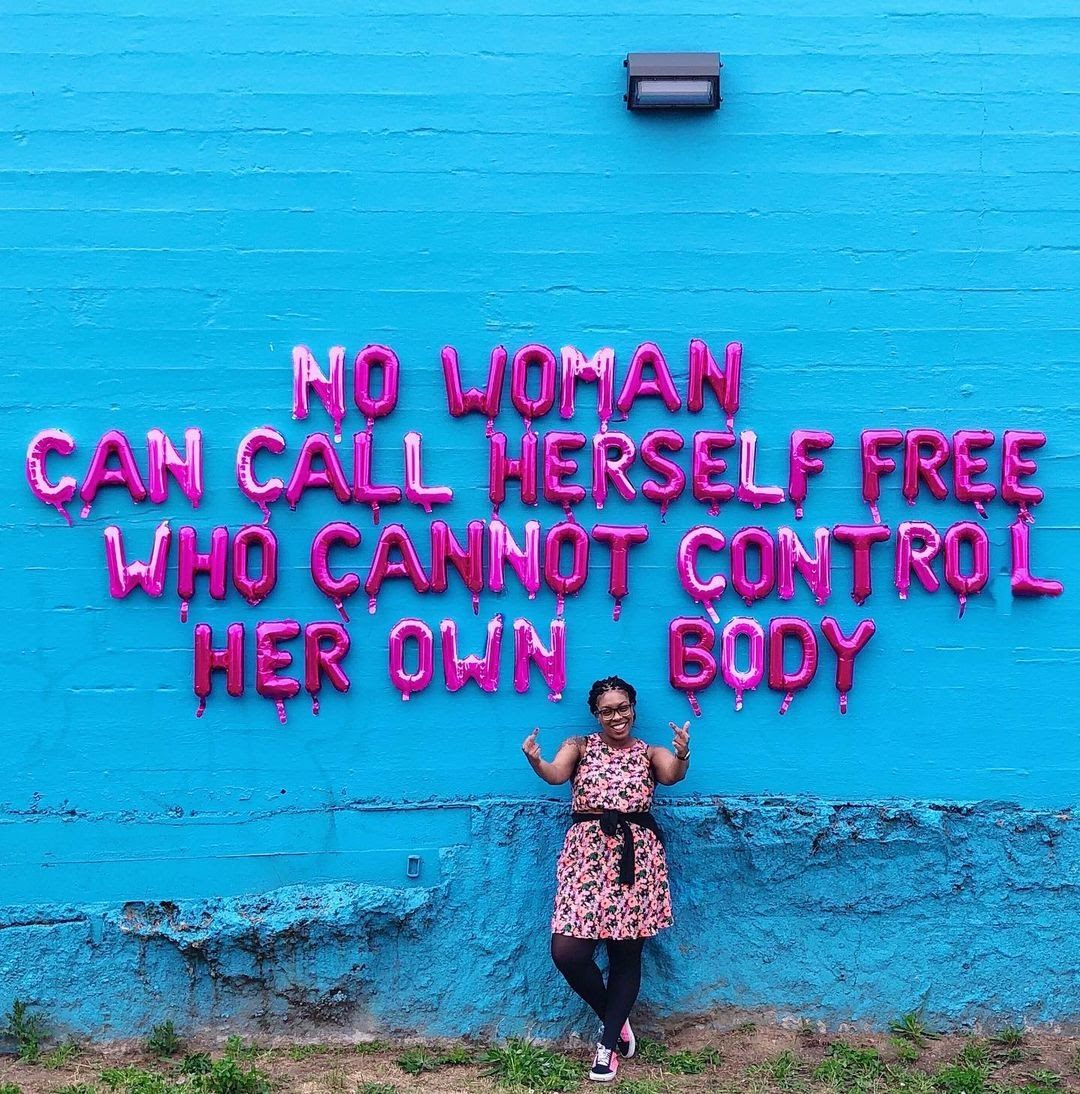 All of these political phrases are designed to be phrases which cannot be refuted, using language like “No,” “Stop,” or explaining what something is or isn’t, who you are and who you are not. These memes do not permit the digging up of definitions, and allow erasure of trans voices and imaginations of justice.

Movements reside in the discomfort of discussing and bringing to focus unchartered new ideas which challenge the status quo, not which limit imagination. And these memes fall short of that.

The real danger in these memes lie in how they can even halt public thought and lead to inertia. These short sentences which keep the conversation contained are often carelessly reappropriated in dehumanizing contexts.

When we speak about the horrors of political memeification, the past months have seen a rise in this as the social media users took to calling out how the carceral system continues to cause malice to Breonna Taylor.  Unfortunately, these rises of solidarity have often fallen short. Across Instagram, there are countless posts demonstrating the memeification of Taylor’s death.

Since Breona Taylor’s murder people have took to Instagram to selfies with the captions saying the same phrase, “kill Breona’s killers,” and other posts of just her name, and other posts made deliberately quirky.

Twitter user @Miss_Ethiopiaa says on Twitter, “Breonna Taylor is not a meme, and neither is her death. She is  a Black woman with a life and a story and a personality and loved ones. Please consider this before your next quirky post or retweet.”

The post contained an image calling for more empathy and understanding of the life that is being re-appropriated without consideration, “Breonna was a person before she was a hashtag.” 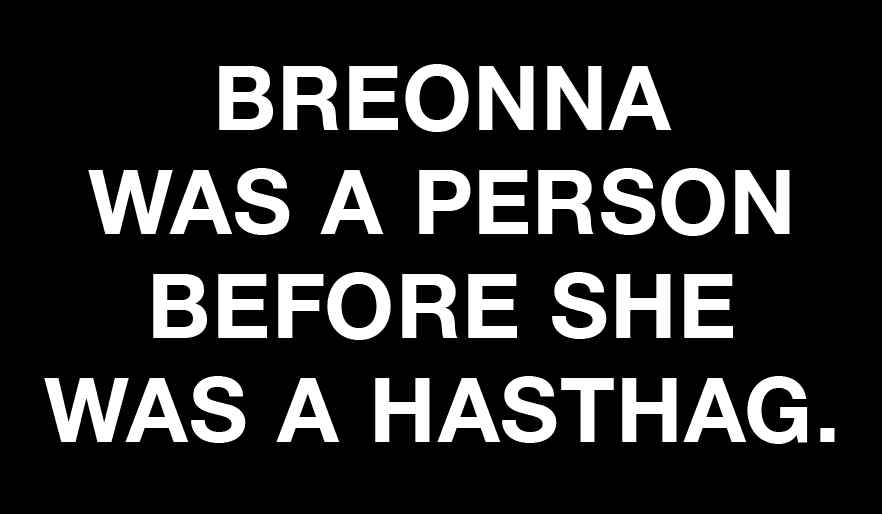 Huffington Post culture writer Zeba Blay writes, “Turning Breonna Taylor into a meme, then, risks turning the conversation around what justice looks like for her into a temporary fad… Other than the firing of one police officer involved in her killing, there have been no real moves toward rectifying the situation. And so, as ‘Arrest the cops who killed Breonna Taylor’ gets repeated over and over again, it becomes an abstraction, it begins to lose meaning.”

Karen Attiah describes how the memeification of Breonna Taylor’s death and other violence against Black women needs more examination and conversation. She writes that these uses of social media which are meant to commodify and be used as “fodder” for performative allyship  are “a symptom of the fact that America has never had a true national reckoning about brutality against black women.”

These memes are perhaps the closest we have come to a collective understanding of violence against Black women and trans lives, and yet they fall so short from communicating the truth and severity of injustice. These high level symbols are enacted because, perhaps, that is the only language we are culturally able to communicate with.

These memes spread our shared grief, anger and burden. The antidote to a culture lacks the language to this cultural trauma. As we come out of histories of denial, avoidance, and silence, there is no resolve that is offered. Instead we find ourselves present in these memes.

With no futures of justice and shared visions among us, the memes are only moments and not movements. Movements require more than symbols and commodities. Awakening and conversations—shared visions for abolition, emancipation and growth.

I have not accepted any resolve around the questions that loom as I scroll through these images which are dense with realities that speak to traumas, dense with blaming and shame, and shallow with cute aesthetics and the faces of teen pop stars.

What I do see as I scroll, is a starting place, a moment to look at what is excluded and extending out of the meme. What conversations, collectively, are we not having, avoiding, under equipped to crack open in the algorithmic monopolies of social media? 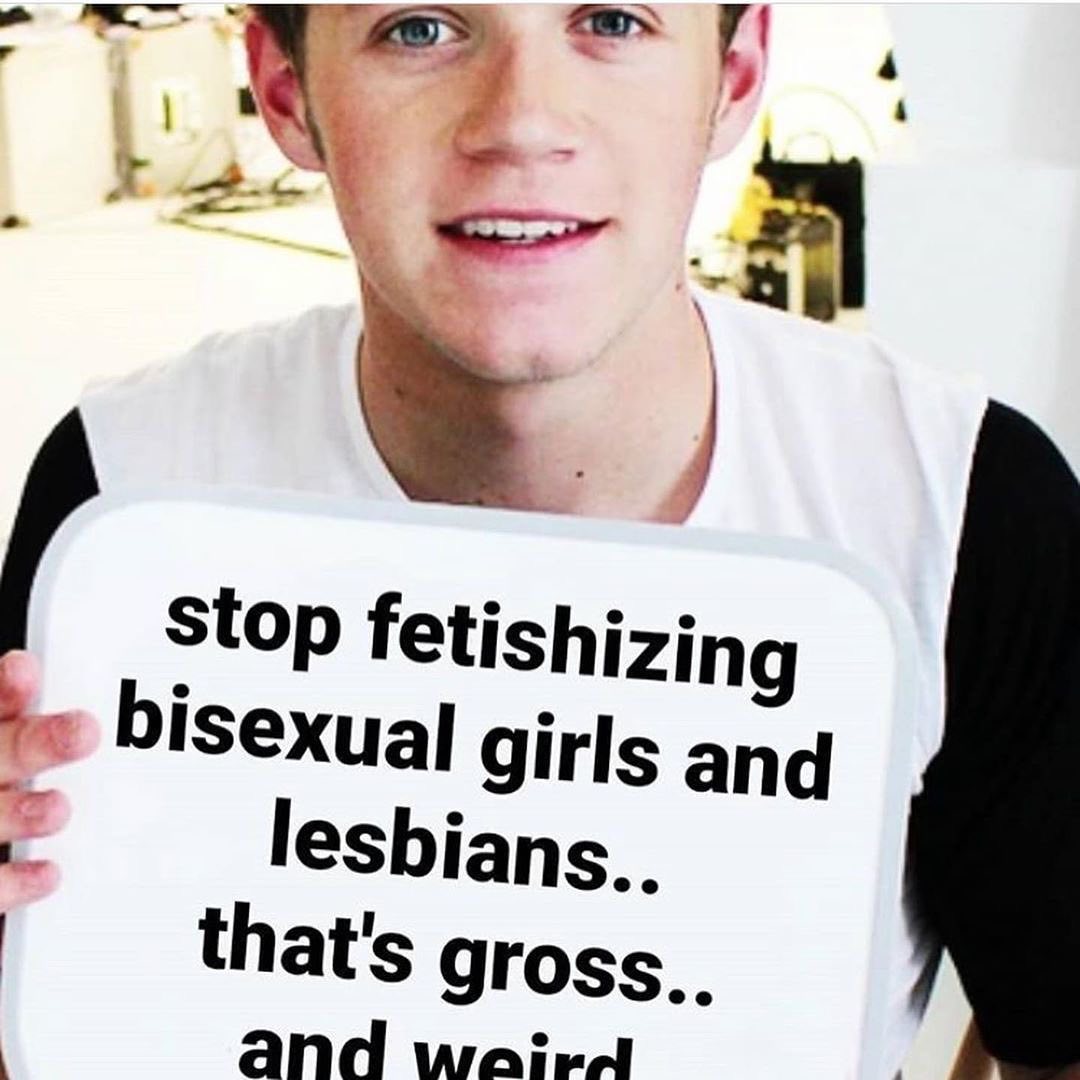 As I gaze, lovingly, into Niall Horan’s eyes I wonder how many likes and shares does it take, for us to be able to speak to the wide breadth of justice we want to envision into the world? How can we break open these phrases? How do we equip ourselves with new language to turn these moments into movements?

Article
1010 views
Beyond the Meme