Samson Cooperman is a comedian who has worked in Quebec, Ontario, and New York. His performances are hilariously physical, neurotically introspective, and sincerely irreverent enough to make you completely relate. You can catch him next at The Comedy Nest on September 2nd, where he will be defending his title as winner of the Comedy Lab contest.

Raissa Simone interviewed Samson on August 29th in-person to catch up about his unique style of humour and on being a comic during COVID.

Samson, how are you doing?

Just awful. Tell me about when you first felt funny to other people.

When I was in elementary school, I had a lot of fun making my friends laugh. I was the class clown basically. But, it was weird, I didn't consciously want to be the class clown, it was just naturally what I did. I think it was because I never got any sleep as a kid, so I was very manic when I'd show up to school. My eyes were always red in Grade Six, so they thought I was high.

So, since you were young, you were chasing the comedy dragon.

I've currently regressed. I don't live as a twenty-six-year-old and I'm trying to go further back.

Are you perpetually trying to be that class clown?

Yeah. My life philosophy at this point is that the world is so crazy, nobody knows what to do or think, so I just figured I'd make light of things and hopefully ease the pain—no, that's a lie. Not 'ease the pain,' maybe ease my own pain. But I'm mostly just fucking around and enjoying it, and in retrospect I realize I did make light of situations that sucked.

Do you find that this happens in your life a lot? That you made a situation funny because it was difficult or weird or uncomfortable, and you brought an alternate light-hearted angle to it?

I always wore my life on my shoulders. It was always difficult to keep secrets and I was already a nervous kid, so keeping secrets added a lot of weight, so, I would just tell people things, like, "Hey, my dad used to smoke crack!" (Laughs). And you're telling this to a kid who is living in a mansion in Westmount whose father never shows them his crack habit. And it brought a sense of shock that was funny to me.

Do you feel like other people felt more able to be vulnerable with you because you made light of these serious situations in your own life?

Well, my family was also overtly fucked up. Whenever I brought friends over, there was always a story for them to bring back. I would always have a whole itinerary of activities to keep them entertained. I don't know what went wrong in my life that I always felt a need to keep people entertained. I never had a friend over to do nothing. I always had my friends either laughing or scared or crying or all of it. Everybody got the whole package when they would come over. I always got a reaction.

Right, you could always offer an experience.

It really comes down to this; if you're not getting the attention you want or the positive responses in your family to develop while growing up, some people, like myself, we'll then seek that validation from others. I luckily was actually funny. If I wasn't funny, I don't even know what I would do for attention.

I have this channel. I also play piano. But, I'm sure there are people who were also treated like a piece of furniture growing up, but have no talents, so they… get into politics or become a sociopath, I guess.

After all these years of making people laugh, when did you decide to bring your brand of humour to the stage?

I never really watched stand-up, I never really liked Seinfeld or the comedy shows everyone was talking about. I really just hated it. But, I once saw a guy on HBO—to this day, I don't remember his name—and he was doing this bit about a vagina, opening his hands and saying the word 'pancake' or something. He was being very physical. He was just blowing ADHD through his mind, body, and soul, and being rewarded for it. In a weird way, I kind of wonder if that was a real memory or just some dream-premonition I had about myself. So, when I saw this guy acting how I act, realized this could be something I could do and get rewarded for it, I wanted to do it.

You're one of the few Montreal comics who seems to devote a lot of thought to characters in your comedy.  Where does this come from and what inspired this characterization?

Anything but me is funny.  Anything but my actual personality is funny. They're mostly exaggerated caricatures of myself, while my true self is just a guy who obsesses over stuff.  I've always had a slight fear that all of it is actually a result of being on the [autism] spectrum. I do have an obsession with things "not being right." If something's not correct in my head I become obsessed. Now, imagine if this trait were put toward something useful like predicting the stock market or getting every ball in on one hit on the pool table… but, instead I just fixate on situations and scenarios and turn them into jokes. And the jokes relieve the pressure.

One time, I watched you spontaneously begin acting like an elderly misogynist Jewish man for about forty minutes. You completely committed to it. What's going through your mind when you explore a character like this?

I'm not Johnny Bravo, I'm not in the mafia, I'm not a Jew in Hollywood in a tracksuit. So if I'm just this guy who looks how I do, saying "broad" to a girl who probably barely wants to be there, acting as if I somehow own this "broad…" It's just such a funny situation because all of the threat is taken out of the word. It's like a puppy biting your shoelaces.

I've noticed that in your comedy. You make jokes about death, depression, and pain. You take what could be perceived as 'threatening' or 'off-colour' and by exploding the character to such bizarre proportions, you take any power in the 'off-colour' language and render it silly.

Yeah, pretty much. You still have to be careful depending on the context. If you're at someone's funeral and are sick enough to have a menacing comedic thought, if you want to crack a joke, it better be the funniest thing they've heard in ten years, otherwise they'll never talk to you again.

Recently, you pointed me to comedians like Chipps Cooney, who is very absurdist.

Yeah, that's it, it's about being absurdist. It's about being absurd and contrasts. Say, my uncle, he's in his mid-sixties and he lives with my grandfather. My grandfather will have his way with the apartment because he lives there; it's his place and he can do as he pleases. But—my uncle will still act as though he deserves respect even though he has no say in anything. And he relinquishes that respect very quickly as well. For example, my grandfather will take pear juice out of the fridge and my uncle will say, "Eyyy, Pa! You takin' mah pear juice???" And you hear upstairs,"Yeah." And my uncle goes, "...Okay." Puts up no fight at all.

I take something that you accept face-value as kind of funny and snowball it to see how absurd I can make it go, and then the audience can enjoy this image.

You talk a lot about mental health in your comedy and finding humour in feeling disconnected from other people.

I think it makes it easier for me… I wasn't raised with a lot of support. So, when someone else might make a corny or cheesy remark or would say, "I love you," I say, "Fuck off." (Laughs). I'll playfully say something offensive, but it's so obviously just a thinly veiled sense of love. I think it's my way of making sense of actually offensive things growing up that weren't thinly veiled love… I kind of took that darkness and domesticated it into a 'love-ness.'

You seem to enjoy pranking people. Is pranking a way of being social that made more sense to you?

Sometimes, my dad would connect with me by trying to make me laugh by telling me about a crazy prank he pulled on someone in his office. So, I did inherit comedy from my father and mother, but it only activated in me because of the trauma.

One time, [me and my friends] called like, seven cab and pizza companies to go to this other guy's house at 3 a.m., and we told the cab drivers that they needed to ring the doorbell because we're going on vacation. And then, the guy's father runs out in a bathrobe. How do you feel sorry for a guy who's rich enough to have a bathrobe with his initials on it? You know what I mean? You don't.

Comedy is such an interactive art form. Since COVID-19, have you found it difficult to find audiences to connect with?

I've been very fortunate. I have been getting stage time during COVID. I'm really surprised actually. I thought Montreal would be a hotspot for people being isolated. But, we are minimizing risk at our shows. They are socially distanced.

What has changed most for you as a comedian since COVID-19?

There is a lot less stage time. But, I've worked really hard to prove that I'm reliable, so people are giving me stage time on their shows. I'd advise other comedians to just do as much as they can and try not to get worse. Everything has gotten worse, but I'm lucky.

Tell me about the next month for you. You just won the Comedy Lab contest at the Comedy Nest and will be returning there this Wednesday. What else do you have going on?

The Wednesday show is open mic, but also a contest for a monetary prize and a guaranteed spot the following week. I had a great time last week and I'm looking forward to doing a new and improved version this week. Last week the theme was 'conspiracy theories,' this week it's 'fake news,' meaning I'll probably just do the same set. I'll also be performing a couple of weekend shows at Yuk Yuk's in Ottawa. And I'll be performing on the Montreal Comedy Series on September 6th.

This interview has been edited and condensed for clarity. 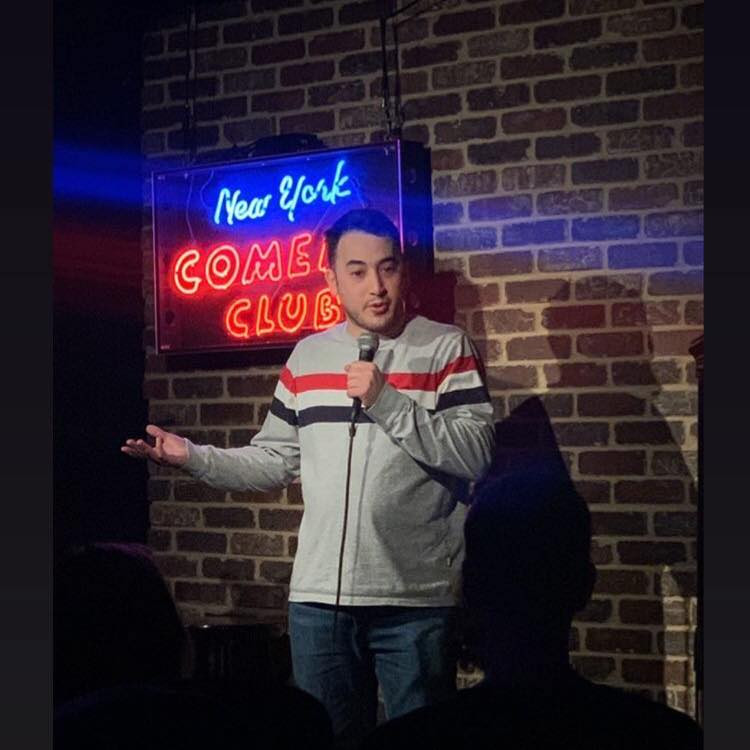 Other Events by this member
Reference Link
https://godberd.com/m/events/view/Interview-with-Comedian-Samson-Cooperman?eid=345&pid=0