J. Burrello hatched out of a mysterious polka-dotted egg that washed up on shore circa 1987. The young aspiring independent comic artist was taken in by cloaked cult-like figures who taught him that the universe was a very boring place, credulity is a prized virtue, and masturbating is about the most evil thing you could do. After years of diligently studying their sacred scrolls, he discovered he lacked the credulity to perpetuate their schemes and turned his cartoonist pen against his captors and escaped. Now estranged from the mystical life he once knew, he scribbles in the dark, trying, perhaps in vain, to unlock who he truly is. He is the creator of the webcomics "Blinky & Sal" and "Barb."

Raissa caught up with Jonathan about his comics and his nuanced perspective on September 19th by email.

The first cartoon I saw of yours was a Blinky and Sal comic you posted Facebook. The content was so oddly sincere that I felt immediately endeared to these saucer-eyed characters. They managed to be both entirely cute and ridiculous in such a way that the visual itself draws laughter from the reader. When did you begin using characters and exaggerated cartoonish features to convey humour?

First of all, thank you and now my mind is feverishly racing to figure out which one you saw first. I have drawn cartoons ever since I was a little kid. Big eyes always featured in my childhood doodles. Bats too.

How would you describe the Blinky and Sal comics in one sentence?

In the Blinky and Sal comic, the characters often hilariously express nihilistic opinions. In the midst of COVID-19, the characters' anxious meanderings feel especially timely. How has the new social world of COVID affected the content of your work?

I haven’t done too many COVID specific comics and the tone hasn’t changed much. Weirdly, I feel like the current insanity going on in the world has maybe brought more people down to my anxious nihilistic level.

How has the current political climate (itself rife with content for any creator interested in the absurd) found its way into your work?

There has often been a political bent to a lot of the comics. I do, however, worry about being unclear or missing something or oversimplifying or just being wrong. But I did do a long story arc where the Blinky and Sal cast had to deal with the rise of a corrupt demagogue and corporate pawn called Mayor Clown Hitler. The metaphors were not subtle, but it had time travel in it which was fun.

As someone who grew up religious, I found the religious content of your comics to be so perfectly absurdist and with just the right dose of blasphemy.  Tell me about how this irreverence came to feature in your work.

“The right dose of blasphemy” is important to me. I don’t necessarily want to offend people. I want to work through my own demons. Sal’s a blunt realist; Blinky’s a neurotic but optimistic agnostic; Spatby’s a lock-jawed religious zealot; and Todd’s a vain and ineffectual deity causing more harm than good.

I grew up very Christian (Pentecostal and Free Methodist) and fervently believed all of it up until my mid-20s. Around then I began to realize that intellectually I had no reason to believe it, and morally I didn’t jive with the Church on a lot of things.

Blinky and Sal  born while I was living in South Korea, shortly after I came to terms with the fact that I was suddenly an unbeliever. It was a long, emotional, and isolating paradigm shift. With no one to talk to about the intensely personal experience, I made a comic where characters representing different aspects of my consciousness could duke it out. In the beginning, I didn’t think anyone would read them. It was mostly for me.

I find that your Barb comics show a character who is both completely adorable and completely menacing, which is the quickest way to my heart. How did you come up with Barb?

Blinky and Sal was so naked and depressing at times that I needed a change. I wanted to create a character who wasn’t insecure and paralyzed by indecision. I wanted to build a sword-and-sorcery world with heroes and hope. I wanted to make something a bit more fun and escapist. Something with adventure that would take me out of my own head a bit. And I wanted an excuse to draw monsters. Youthful exposure to Conan, Xena, the stop-motion creatures of Ray Harryhausen, and the dynamic fantasy illustrations of Frank Frazetta all had a hand in inspiring Barb. Barb’s just a barbarian girl in a barbarian world.

Which cartoonists have inspired your work over the years?

Berkeley Breathed, Bill Watterson, Mike Peters, Charles Schultz, Walt Kelly, and  Gary Larson’s The Far Side was the only thing I wanted to read as a kid.

I'm curious about which illustration tools you use to create your comics.

Typically I write a tiny script, sketch it out on paper, ink with a brush pen, scan, and color digitally.

What do you see as the future for your art? What mediums are you hoping to explore?

Right now I’m trying to put together a book of Barb and publish a few more Blinky and Sal collections (there are already three out now: Straight from the Pit of Hell, Toddspeed, and Propaganda).

I really want to study art more. Really get a handle on anatomy and landscapes as well as drawing and painting techniques instead of just winging it. I really want to produce a few long-form standalone narratives and just get weird with it. I have a lot of them written and hopefully I’ll figure out a way to get a publisher interested because there’s something intimate about a physical book that you just can’t get across in webcomics. The other ultimate dream would be to make Barb an animated series.

This interview has been edited and condensed for clarity. 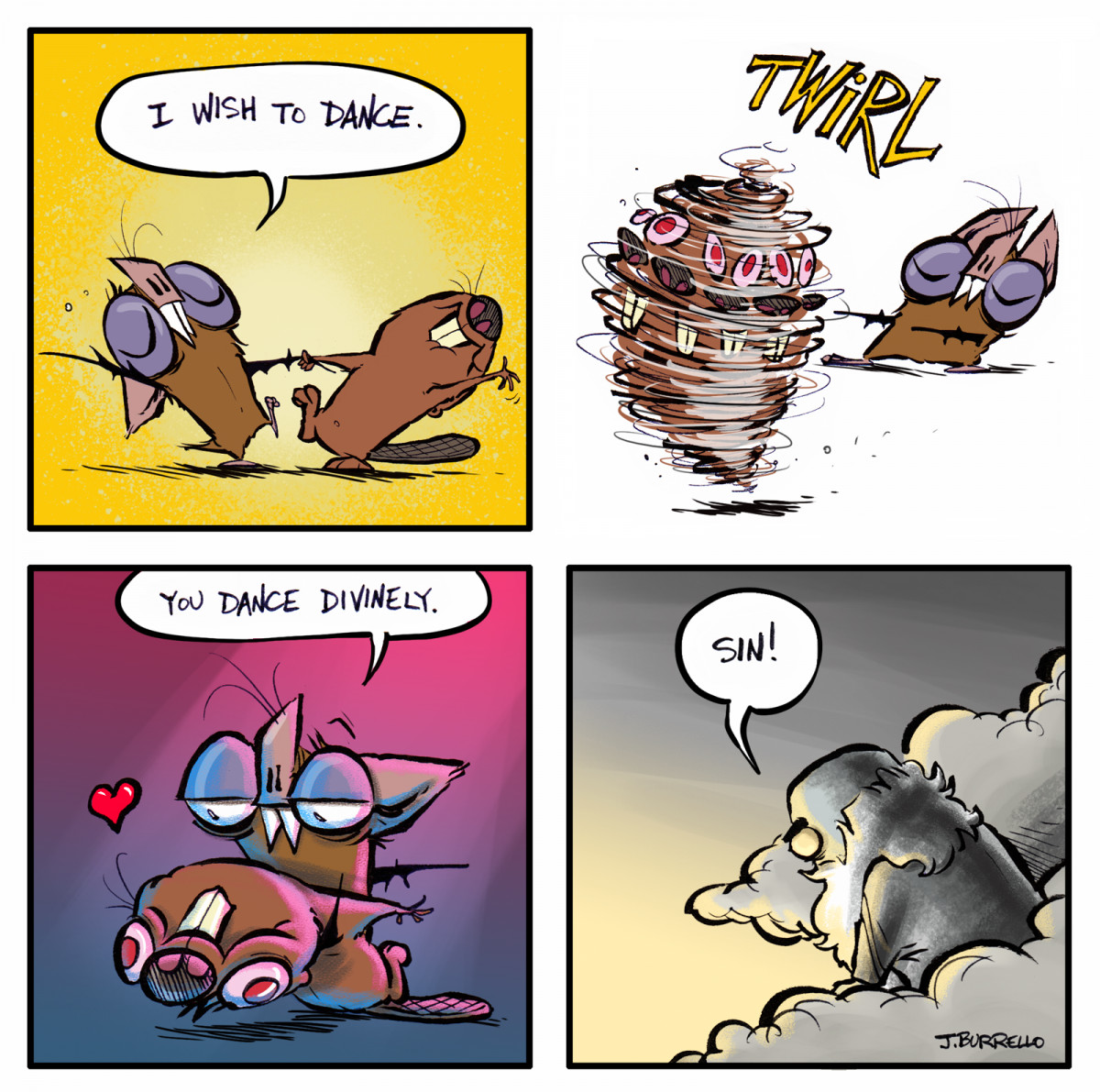