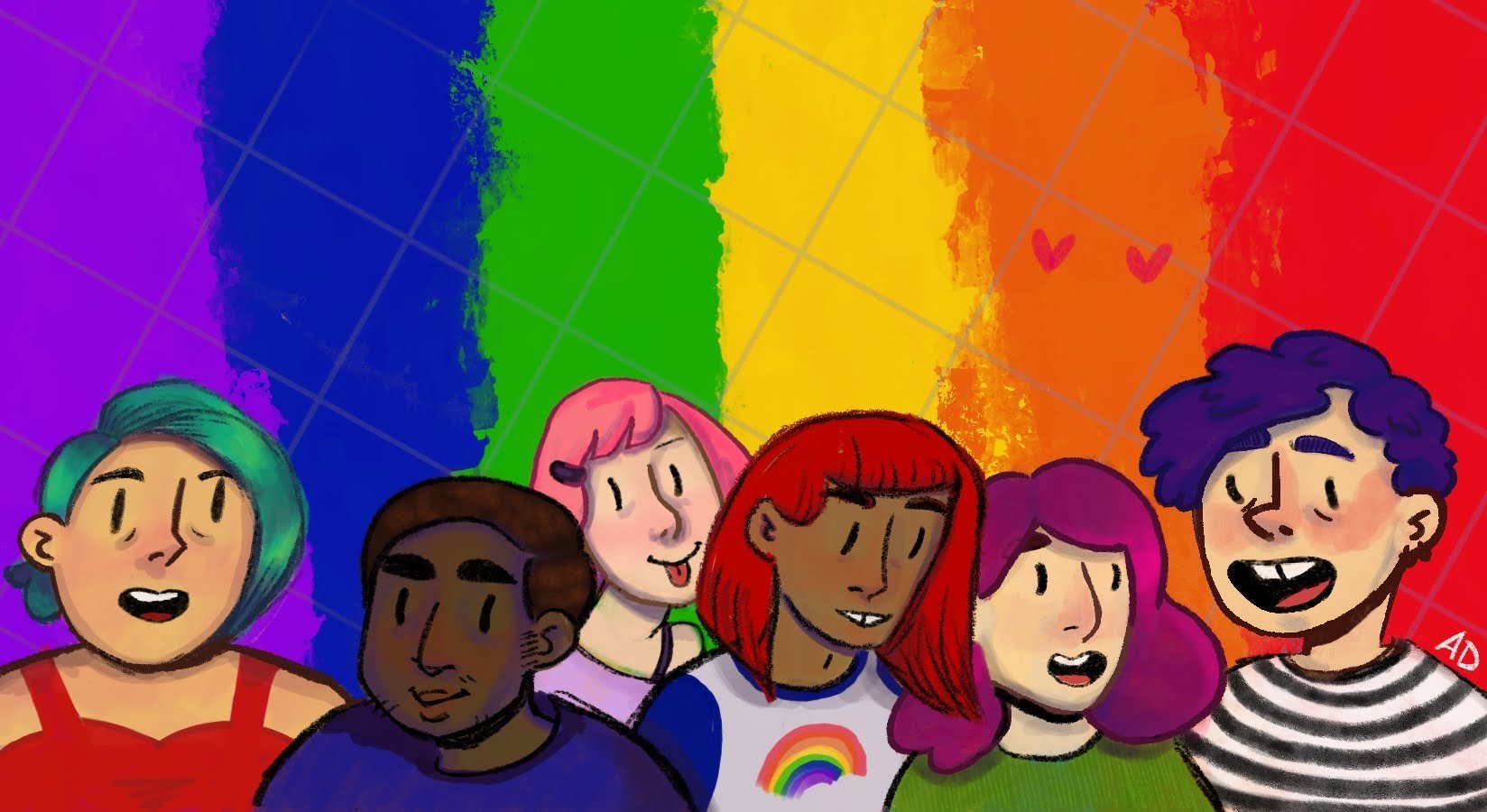 LGBTQIA+ Fiction to Keep You Sane

If I’ve learned anything at all from 2020, it’s that winter in quarantine can be long without some form of escapism. While other people had their sourdough bread adventures or their punch needle embroidery forays, I tried to dive into the thickest and juiciest queer books I could find (and the PCP-fever-dream-induced experience that was Tiger King.)

There’s just a certain kind of unsurmountable joy in walking around a bookstore, knowing that any one of these dense rectangular repositories of experience could be the one to entertain you for countless hours, or even years. They’re magical!

Tsundoku is a word in Japanese that refers to the act of compulsively buying books and letting them pile up around you. In addition to some other idiosyncratic quirks, I most definitely would be considered someone who relishes in tsundoku. Some people in the West might call that hoarding, but I disagree. Hoarding implies a certain level of distress, and the only anguish I feel is when I realize just how many books I have left to read. No fear! I have a plan. I’ll be buried like a pharaoh, surrounded by all the books I never managed to finish in my lifetime so I can read them all for eternity.

As I mentioned earlier, my latest obsession has been with queer/LGBTQIA+ literature and graphic novels. When you rarely see the delicate intricacies of your identity represented in mainstream media, books and comics become the salve to soothe your cis-heterosexual-inflicted wounds.

What kind of queer books? I’m talking gay, lesbian, trans, asexual, aromantic… I want them all! I especially look for books that combine these identities with polyamory, because I think I speak for everyone when I say, enough with the love triangles, let’s make some love rhombuses.

Here are the latest hot finds I’ve read that are queer AF.

1. Laura Dean Keeps Breaking Up with Me
Mariko Tamaki

Ah, love. As a dear friend of mine and I agreed: love is like being on MDMA for a week, then recovering for a year. It’s a heart-wrenching, vulnerable experience where you connect so intimately with someone at the risk of getting your heart stomped.

No one knows this more than Freddie, a young lesbian teen who keeps getting dumped by her cooler-than-thou girlfriend Laura. Friends and fortune tellers insist that Freddie needs to end it for good, but Freddie races blindly back to Laura every time. Let’s face it, who hasn’t experienced a love like that?

Read it for the calm, beautiful drawings that are reminiscent of lo-fi music and scrolling through the #aesthetic tag on Instagram, and for the sweet relatable story.

October and Halloween might have just passed, but are you still having a deep yearning for more spooky content? Aiden Thomas has got your back with his first novel Cemetery Boys.

Yadriel is a young gay trans boy trying to prove himself as a man and brujo to his Latinx family, who have had difficulty accepting him. While trying to solve his cousin’s murder, Yadriel accidentally summons the ghost of a fellow student—and then has to navigate catching a killer while keeping his new smart-aleck ghost pal from becoming a vicious poltergeist (or a crush).

This is a fun read that promises a balm for the “magical boy in a magical world”-shaped hole in our hearts left by the disappointment of She-Who-Must-Not-Be-Named.

Do you like historical fiction, but struggle to find stories that actually touch on queer themes without drowning us in punishments served to our beloved main characters for their queerness? Do you like hints of magic? If so, this is the book for you.

Set in the 1700s, the story follows Monty, a pompous and self-defeating son of a nobleman, as he sets off on a journey with his medical-school-obsessed sister and his violinist friend Percy, who suffers from a misunderstood condition. Meant to be a quick European tour, their vacation takes a wild turn as they flee a murderous foe seeking the return of a precious, mystical object.

It’s a wonderful adventure from start to finish. Monty is an absolute scamp and definitive “chaotic bisexual” while Percy is soft-spoken, biracial and gay. Monty’s sister tolerates the romantic drama between Monty and Percy while exuding pure asexual vibes. It’s a darling of a read, perfect for a cold winter’s day.

That’s it. That’s the entire reason why you should read this book. NEXT! —But in all seriousness, friends recommended Gideon the Ninth to me promising it would change my life and blow my mind, and yes. If you are not drawn in by the gorgeous cover art, or the promise of lesbian necromancers in space, I worry for you. For a solid year, every time I curiously picked this up off the shelf in a bookstore, other clients or employees would appear out of thin air and express their undying love for Gideon the Ninth. Don’t hesitate like I did: go find a copy at your locally-owned bookstore (I highly recommend Argo) and get comfy, you’re in for a ride.

Comics have always held a certain importance within the LGBTQIA community, and this book celebrates that history with a collection of short fictional comics by a variety of LGBTQIA+ comic creators.

Each comic is a sensory delight! If you’re like me, you’ll want more and crave full-length graphic novels featuring these characters. This collection features not just queer representation, but a huge dose of much-needed PoC fantasy by PoC creators!

I especially loved Amaranthine by Joamette Gil and Kelly & Nichole Matthews, a story about an elven forest guardian who discovers a ghost haunting the sacred grove. (Mental note: Do I have a thing for ghosts?)

Julie Maroh, famous for the graphic novel and movie Blue is the Warmest Color, has created a deeply moving collection of comics which touch on almost every aspect of being queer and/or polyamorous in Montreal.

Have you ever gotten excited seeing your hometown in a movie? The familiar Montreal neighbourhoods and landscapes in Corps Sonore gave me a little thrill that contrasts my profound empathy for the stories themselves. It’s a moody and raw series, and I am grateful it exists. Still, I wish Maroh had included more trans experiences, as they’re absolutely integral to the queer and polyamorous social scenes of Montreal.

7. Ace: What Asexuality Reveals About Desire, Society, and the Meaning of Sex
Angela Chen
2020
Beacon Press

Asexuality or ‘ace’, generally defined as the absence of sexual attraction or desire toward others, is only now being validated as a sexual identity—or rather, a sexuality spectrum—in Western culture, with roots connecting to the bisexual movement of the early 20th century. Grouped under that umbrella—for the moment at least—are similar but different identities like aromantic, which is defined as the absence of romantic feelings for others.

There’s a pervasive idea in our society that single people who aren’t seriously dating by 40 are doomed to die alone from crushing loneliness in a sad apartment filled with 73 cats. Ace is a book that arms the reader with thoughtful discussions about the pressures society places on romance, and on sex, as the centerpiece for human fulfillment. Yes, Ace promises to expand and demystify asexuality for the unfamiliar, but it also offers mind-expanding questions that could expand the way you think about all of your relationships, sexual or not.