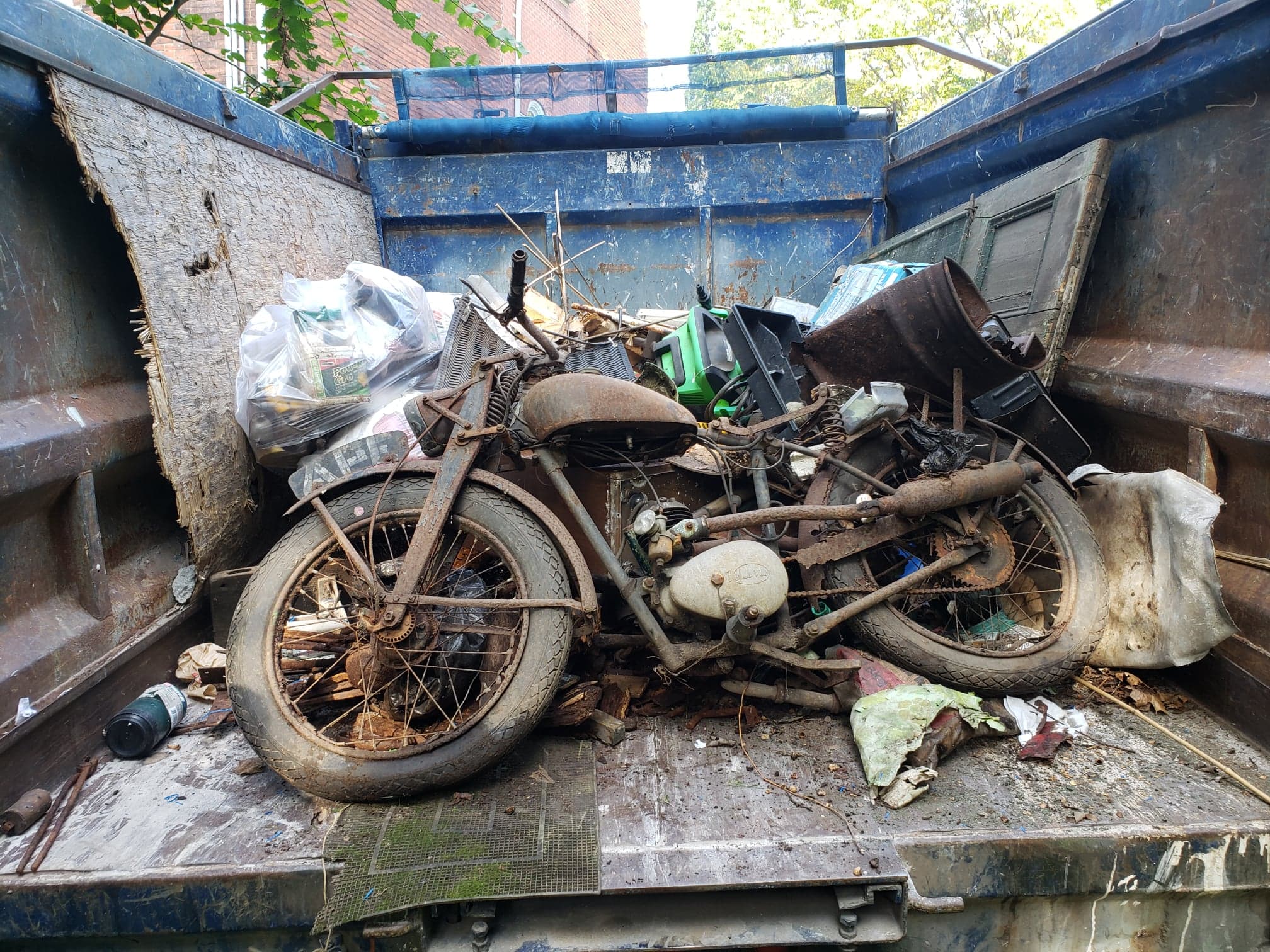 For 5 years a large part of my job was to clean out dead peoples’ houses. We would drive around town in a large open backed truck and fill it with everything that the person had collected over their life. We would grab furniture and useless tchotchkes then drive to a depot at the edge of town. When we got there we dumped everything into a big pile, crushed it into smaller bits, and sent it off to various recycling plants. Diaries and photo albums went to a paper processing plant. Heirlooms were broken down for scrap wood. Wedding dresses and children’s blankets made their way to a landfill. Every day thousands of items, that were once a part of countless memories, are tossed aside and destroyed. There’s a solemness in this, but also, I believe there are lessons.

I remember one job I did on the edge of Hampstead. An old man had died, and his middle aged son hired me to clean out the place before he put the house on the market. While I was in the basement tossing books into a garbage bin, I stumbled across a bottle of cognac.  The seal was still intact and, other than a layer of dust on the bottle, the liquor was as good as new. The booze seemed expensive so I brought it up to the client. He eyed it for a second, then told me his father had been saving it for some special occasion or another. He said it was fine to throw it out, because he wasn’t a drinker himself.

As I took the bottle to the truck, I thought about the idea of a special occasion that never comes. There’s something sad about the concept. It’s an idea of waiting passively for a celebration while never having your anticipation satisfied. I imagined the man sitting alone on countless nights while a clock ticked quietly in another room. Instead of tossing the bottle into the truck bed, I put it into my bag. A few weeks later, when some of my closest friends were gathered, I decided that any occasion can be special. So I grabbed the bottle and cracked the seal.

When you work around death you realize it has a familiar smell. One you’ve always known but never had a name for. It was hiding beneath the smells of Clorox and vitamins at the retirement home when you visited your grandparents as a child. You’ve smelt it latched onto the carpets of an old musty house, but you never really understood what it was. You always thought it was dust or mold or just something that  built up as houses age out of existence, but you slowly realize that this isn’t true. It’s a human smell. Or rather, the inhuman smell of something that used to be a person with human dreams and human ambitions. Now these dreams are gone, and in their place is a foul bittersweetness that never seems to leave the air.

It took me months to realize what I was smelling, because it was a stronger version of a smell that I took to be normal. It was a familiar sensation wrapped around an alien concept, but there it was wafting into my nostrils. On some days I worked in government housing where bed bugs and used syringes littered the floor. On other days I worked in Westmount mansions and tossed out antique cabinets and fine china like they were rancid rubbish, but no matter where it was the smell of death never changed.

Lesson 3: This too shall pass

We could fit about 12 refrigerators in the back of the company truck. The average house had between three and eight truck loads of stuff inside it. The most cluttered house I ever saw took 30 trucks to clean out. It belonged to a 90 year old man who had been hoarding newspapers since the 60’s. They were stacked in 6-foot high towers throughout his apartment. His garage was stuffed with rusted tools and half rotten wooden planks. He kept spare blenders and sauce pans in the bathtub.

People like to hold onto things. It’s a natural impulse that we’ve cultivated for as long as there’ve been settled societies. It’s an impulse that was completely reasonable and necessary for the majority of recorded history. Most of our ancestors could only afford to have one or two sets of clothes. They absolutely needed to save every spare rag they could find to repair these scarce garments. Similarly, people had few items of furniture, and would save scraps of wood for repairs. A cabinet was often repaired many times before being passed down for generations. The urge to hoard odds and ends helped  keep our forebears alive for tens of thousands of years. It’s only in the last 100 years or so that this practice has become maladaptive.

Industrialization, automation, and planned obsolescence have produced a world of useless excess that human minds weren’t built to deal with. Most of us don’t hold onto 60 year old news papers, but we do  keep defunct computer cables, broken remotes, and clothes that are too small. We do this, because we’re worried we might need these items someday. People collect things until they can’t remember what they have.

When a person dies the family is left to clean out the person’s house.The more we keep during our lives the more our loved ones are left to sift through once we’re gone. The company I worked for would charge thousands of dollars to a grieving family. The alternative was months of work dragging the items to the dump. When my grandmother died it took my family almost 3 months to clean out her house. The processes involved an immense amount of labor and grief.

I did a job in the east end of town on the outskirts of Pointe-aux-Trembles. Two sisters in their mid-thirties had hired me to clean out their uncle’s house after his death. The place was cluttered and a bit ramshackled, but seemed average enough. I went to the far room and started to put old clothes and loose nick-nacks into garbage bags. While I did this the two sisters rummaged through the closets to make sure they weren’t accidentally throwing out anything sentimental or valuable. After I’d spent half an hour filling bags and tossing them into the back of the truck I heard a scream ring out from the other room. For a moment I worried that someone had gotten hurt. I thought that a heavy object had fallen out of the closet or maybe something sharp had been badly stored in there and someone had been cut. I dropped my bag and ran towards the scream.

When I arrived at the other end of the house I found the two women sitting on the floor laughing hysterically. Before I could ask about the commotion one of the sisters pointed to a box in the middle of the room. I walked over to it and I realized that a face was staring at me from inside the box. Its mouth hung open as if it was in as much shock as I was. As I got closer I realized it was the plastic face of a sex doll.

We all have embarrassing things in our houses, and death doesn’t magically make them disappear. Someone will find them. They might laugh, or scream, or cringe, but from my experience it rarely changes how your friends and family love you or miss you.