Andrew Jamieson talks to the minds behind the new short film, Waiting for Guttman, Zachary Guttman and Adrian Vaktor.

To settle a bet, a documentary crew is hired to follow Zach around and uncover why he is literally always late for everything-  What the crew discovers, may not be for the faint of heart. 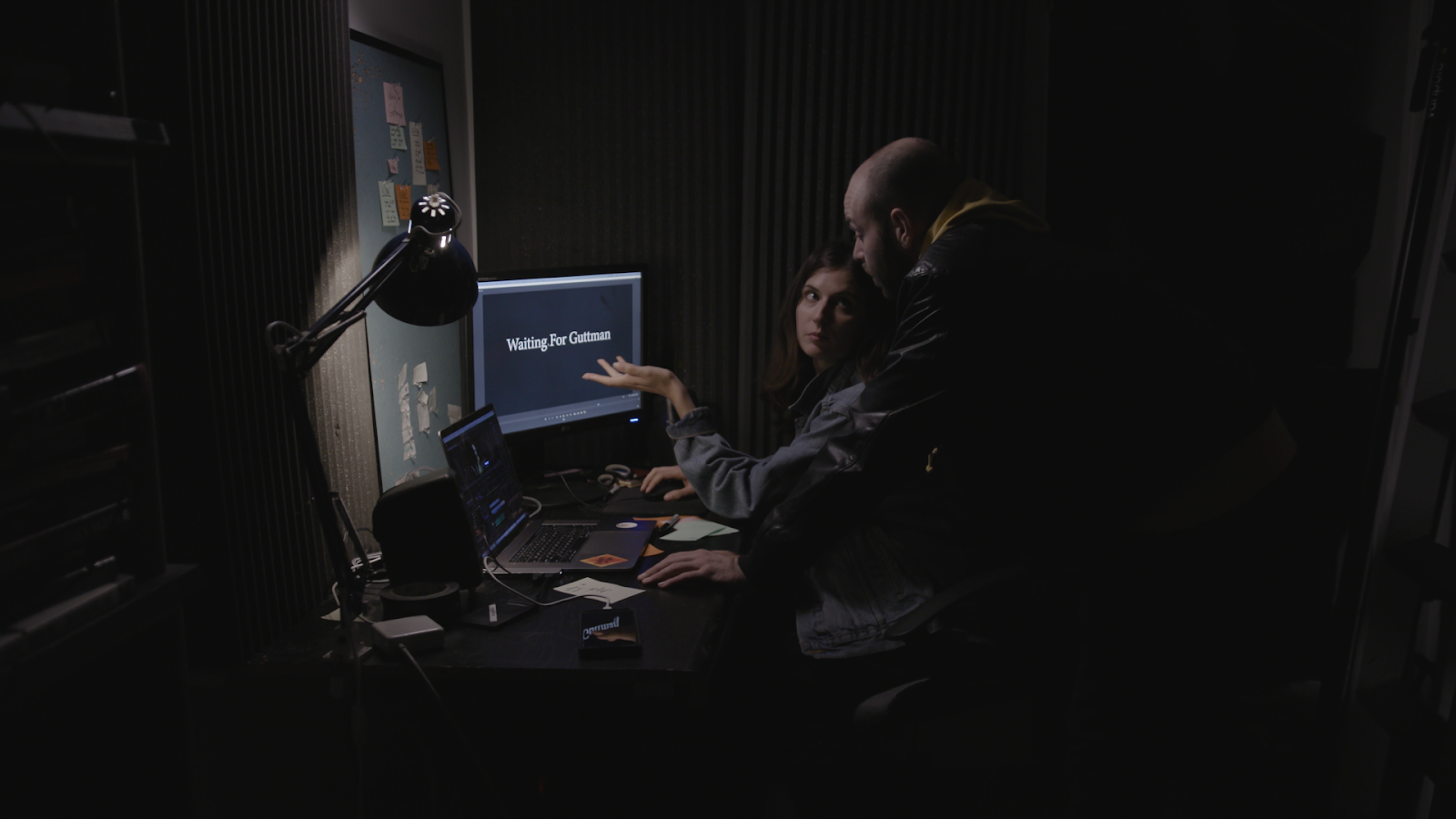 As a writer, I find that most of my work is auto-fiction, to some varying degree.  In Waiting for Guttman you put yourself at the centre of the story.  Is this a common practice for you?

ZACH: In all honesty, not really! Most of my writing is fiction based with elements of who I am and and the people I know sprinkled into the mix, but WFG is the first time I really broke that META Line writing a character of myself. I 100% turned to Adrian at one point in pre-production and I said "Should I just change his name to Ben or something? You know just separate myself just slightly from the fact". Adrian assured me that this was the best way to go about it for what we're trying to achieve and I have to agree with him.

Playing “yourself” is a unique challenge, one only surpassed by directing yourself.  Adrian, you and Zach co-directed the film, can you tell me about the division of labor?  Were roles and boundaries between you established before shooting, or was everything more fluid?  Also, can you talk for a moment about the experience of directing someone, specifically a close friend, playing themself?

ADRIAN: The process of this film was pretty chaotic -so if not anything else, I played a big part as the Chaos Wrangler: many moving parts, indie budget woes, 12,000 scenes to shoot, naked old men, endless variations of opinion… You can just imagine me in a cowboy hat and a lasso made of pure hope attempting to pull these things together the best I could. I certainly had the foolish drive of someone wanting to “Do Something Meaningful” and hell, I’m proud of what came out. Though I did do my best - there are certainly many more things I have to learn!

In another way, I suppose you could see it like this: Zach wrote the story about himself, his friends and his own reality of tardiness - so it was only fitting that he would have a grasp on how the characters should act and interact. He had a big part in rehearsing and guiding the actors - and I would inform the final result on set. We wanted to have it feel like the reality of Zach’s life were  with all the film’s magical aspects in a seamless way.  I definitely always see filmmaking and specifically editing as a sort of sculpting, where the timing, tone, content and result is always subject to change through the process - So my role was really to take all the pieces that the chaos provided and find their line of best fit. 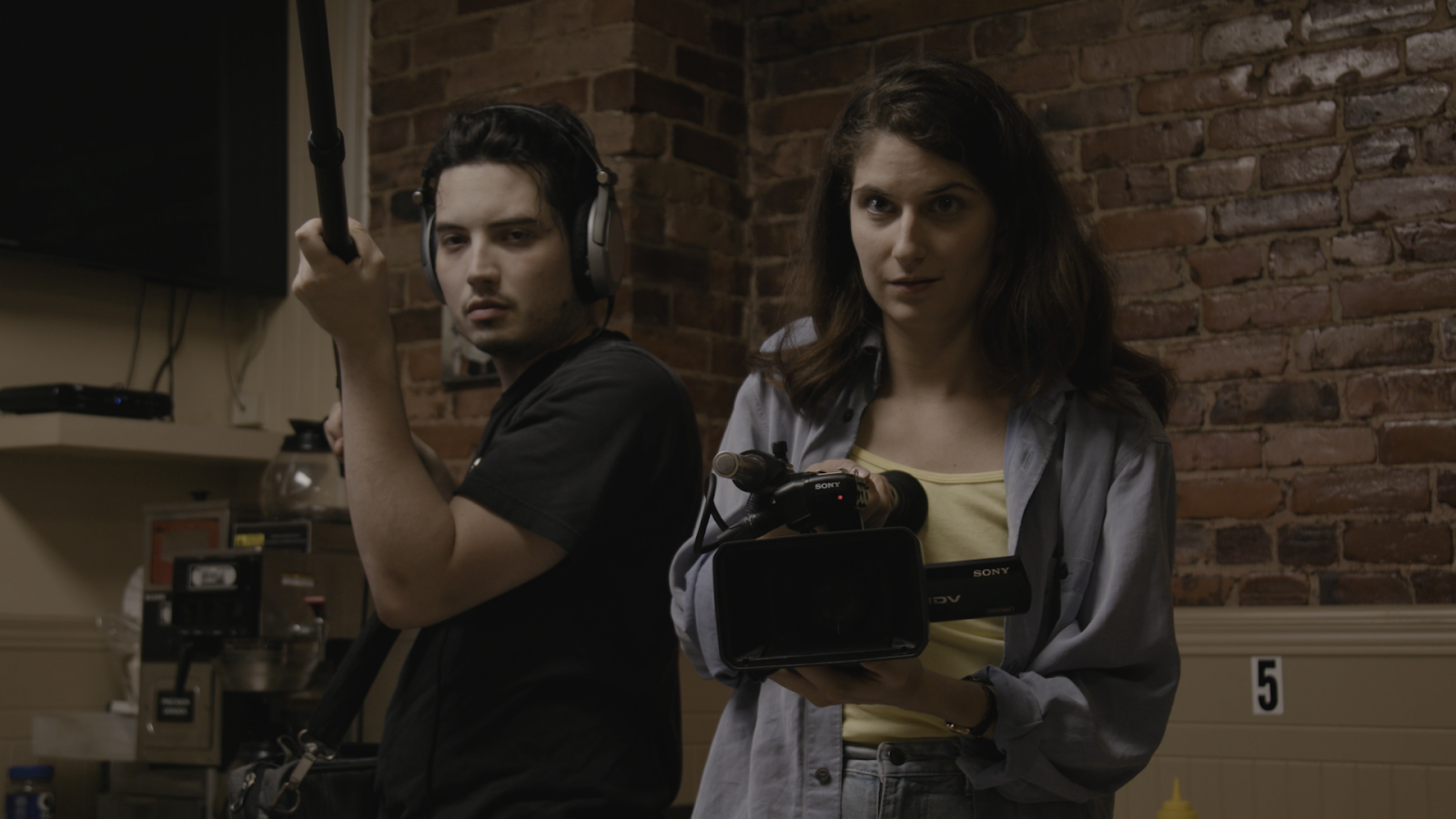 Is there a difference between the Zach Guttman who is always late, and the one I'm speaking to right now?  How much truth can be found in the story?

Z: Well, I mean let's be honest there's some truth to every story... It stemmed from me being late so often in high school and then theatre school that my friends coined the term "The Zach Guttman Rule" (Thanks Russell) They even made a formula for it . But in my defense a lot of the time I was late I was driving my sister somewhere AND SHE TAKES FOREVER. LITERALLY THE SLOWEST PERSON ON THE PLANET. (Love you Davina) So inevitably I would be late, and thus the "Zach Guttman Rule". But as far as Zach in WFG , I think he has it slightly worse with why he's late…

I need to know:  do you remember the formula?  What is it?

Z: Y=2x+30 - I actually had to text Russell and ask him for it because I forgot it; within 30 seconds he replies with the formula. Gotta love my friends.

Do either of you believe in curses?

Z: Yeah why not! Throw some adventure in your life. If there's curses there are also probably prophecies, I'm still waiting for the day I find Mjölnir.

A: I definitely believe that you can one day- out of the blue- find yourself in a cursed state. Yes, maybe not really by magic or fantasy, but by being a more-or-less clueless acting agent in the world. You can easily (and accidentally) tip and change many individual elements during the context of your life that could lead you into a later 'accursed' shape - Why am I like this? - one day you'll ask yourself. By sustained, small flubs.  I might be talking about Karma or Chaos - but yeah, watch yourself - cause the world is - don't let it let you curse yourself.  Nevermind - Abrakadabra! You have rice for hands now! 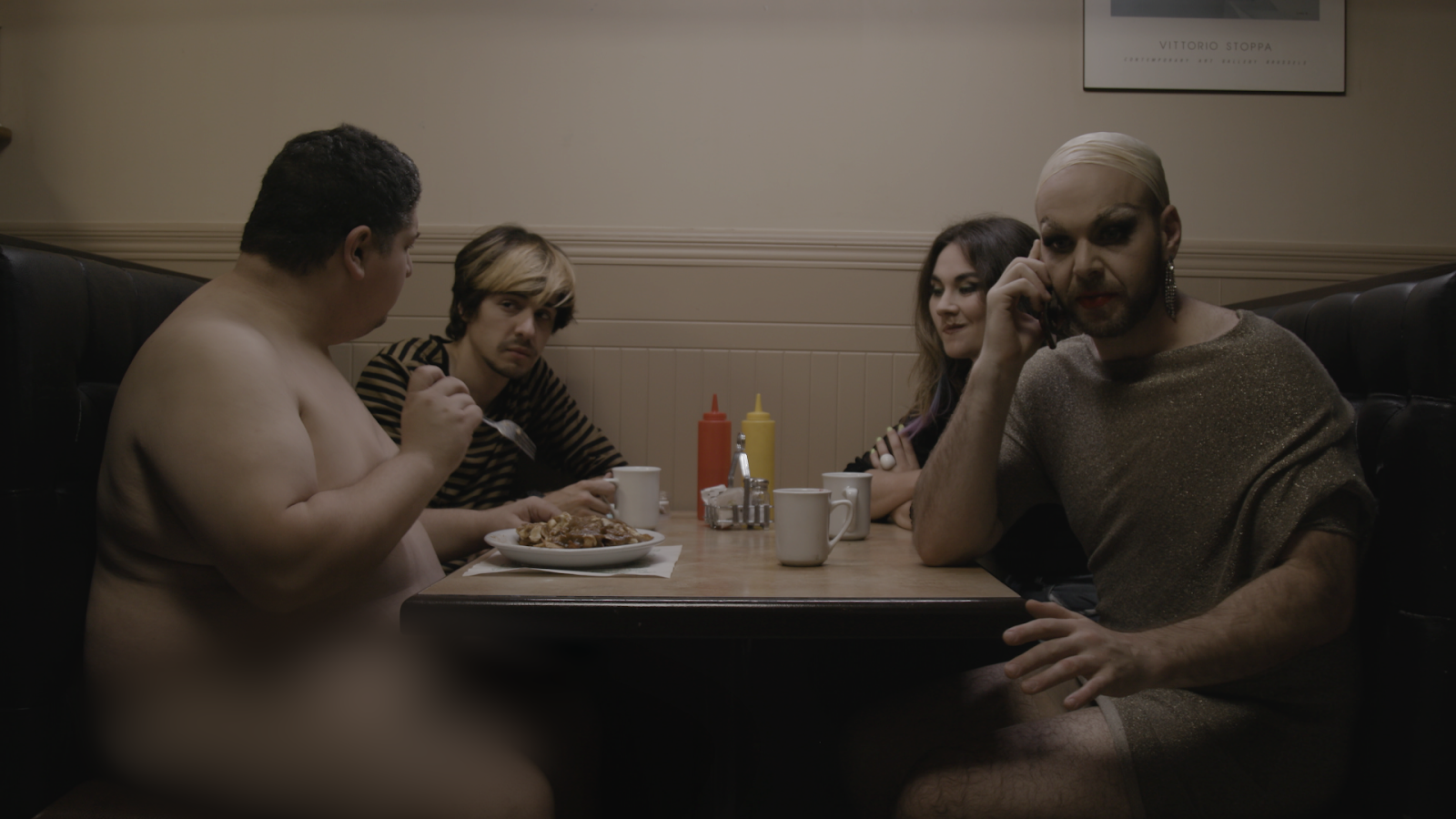 Zach Guttman’s curse in Waiting for Guffman is certainly out of the ordinary.  I mean, it’s downright strange.  Without giving away too much, can you elaborate on the inception of the curse?  Was it a specific idea by one of you, or something more collaborative?

Z: Haha! Yes, It’s quite out of left field. The idea stemmed from wanting something so ridiculously outright strange and odd in that scene, that no one would believe Zach even if he were telling the truth. So when I was writing that scene, I decided to really go for it with something ridiculous and we can always pull back. When Adrian and I first started talking about the script and that scene came up, I mentioned we could always tone it down etc.. Adrian, thankfully verbally slapped me with a “NO”. Now we have that beautiful, glorious scene. There’s a fantastic scene in “Community” with Donald Glover and John Goodman that inspired me with it. All I’m going to say is, Spaceman Paninis.

Ah, I remember that scene well!  “We don’t want people to believe you”, brilliant concept.  I can see the connection.  Zach, you mentioned to me you are currently living in BC, but Waiting for Guttman is filled with Montreal talent.  What are the circumstances that led you to filming here?

Z: I was born and raised in Montreal, and lived there until I was 20. Adrian and I have been making films and sketches together since we've been 13, we got started on the early early days of youtube and we just work incredibly well with each other! Adrian is seriously also one of the most brilliantly talented Artists I know, so it's always a no brainer.

I went to theatre school here with incredible People and when I came back to Montreal from NYC because of the Pandemic, Adrian and I met up and just started talking about our own projects and what we could work on together.

The humor in Waiting for Guttman ranges from clever to grotesque.  How would you describe your own sense of humor?

Z: Haha that's very kind of you to say! Love that. I think my own sense of humour varies so much, it definitely leans towards dark comedy and pushing the norms of what people are used to watching. To me "It's Always Sunny In Philadelphia"  is a beautiful example of that.

Oh yes, I recognize that comedic style in Waiting for Guttman, for sure.  Do you work primarily in comedy, or are there any other genres you’re drawn to?  I suppose that question is for both of you, really.

Z: I feel like this is a very generic answer, but I do love all genres. I went to theatre school for a long time and let me tell you, I fucking love my dramas and my classics. Chekov, Shakespeare O’Neill, Miller. I’ve done a lot of Shakespeare and it’s one of my favourite things to perform, I mean he 's the original OG. He’s the Bard who hit it Hard. God, I can’t believe I just said that… Cut that.

I’m definitely not going to cut that, but I’m going to avoid responding.  I don’t want this piece to devolve into me shit talking Shakespeare, I’ve got an entire YouTube channel devoted to that.

No.  No, I don’t.  But, I could.  So, Waiting for Guttman, in which you're credited as a writer, producer, and actor, appears as a fairly personal project.  Adrian, as co-writer/producer, how did you get involved with this project, with Zach?

A: Well, Zach adopted me from the Institute for the Criminally Deranged (ICD) about 12 years ago and he's my benefactor- and I feed his dogs. Actually, we had a YouTube Channel back in the golden era of the late 2000s and early 2010s (cowbelproductions) with 10K fans which was a lot for our highschool selves. Since then , I went to film school and Zach went to acting school - so now we came back to homebase. Waiting For Guttman came pretty naturally from our careers as minor YouTube celebrities - taking a more pro step forward as well as a large and foolish dive backwards into the endless void. 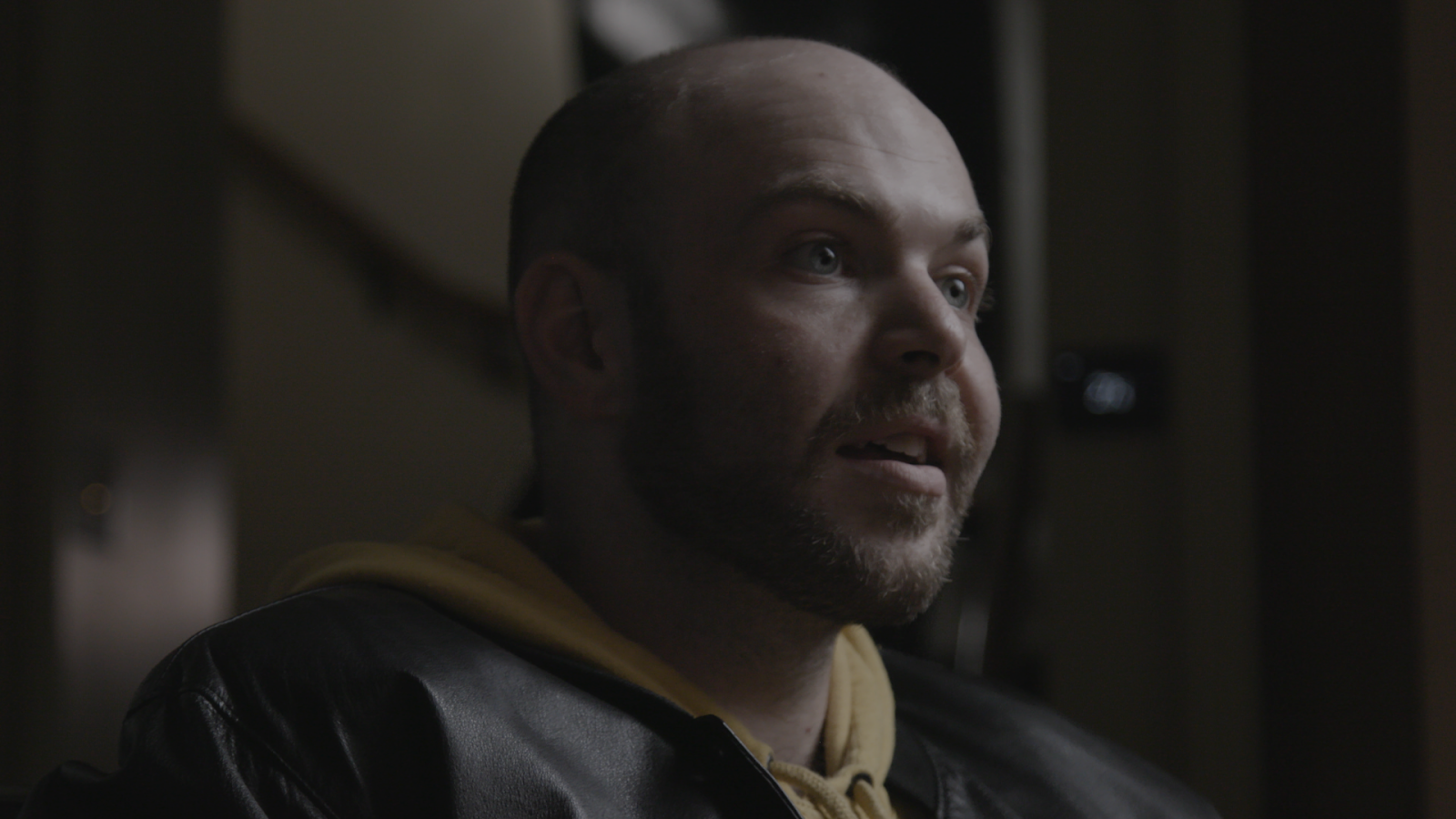 Do either of you have any upcoming projects that you’re excited about?  What’s next?

Z: Well I still need to update my paperwork with the Institute for the Criminally Deranged (ICD) so I can complete my adoption with Adrian. After that, Adrian and I have some big plans. Firstly, we want to continue with WFG and really develop it into a series to build upon the world. We also have a couple of projects that we’re looking to develop and grow. We also have our production company! Adrian?

A: I’m very happy to have been able to share Zach’s story by making this film with him - and it has been a long time coming from our humble YouTube days. Equally, I’m proud of him for having opened up and having been vulnerable on this scale- which is inspiring to me as an artist and filmmaker. I feel as though I am more ready to do the same now because of it.

For years as someone behind the camera, I’ve done a great deal of analyzing and watching- and I feel there is a story in me that surrounds these themes. How people act, what being good or bad means-  exterior to yourself versus your intentions, how your interactions with the world change the context around you and that of others. What can be done about all that?
As Zach and I figure out our next steps with WFG, new ideas for films are always coming.

We hope to see you soon!

For more information, and when to catch the film next, follow Waiting for Guttman (@waitingforguttmanfilm), Zachary Guttman (@zeguttman), and Adrian Vaktor (@adj_vak) on Instagram.

Andrew Jamieson can be found online at www.whothefuckisandrewjamieson.com