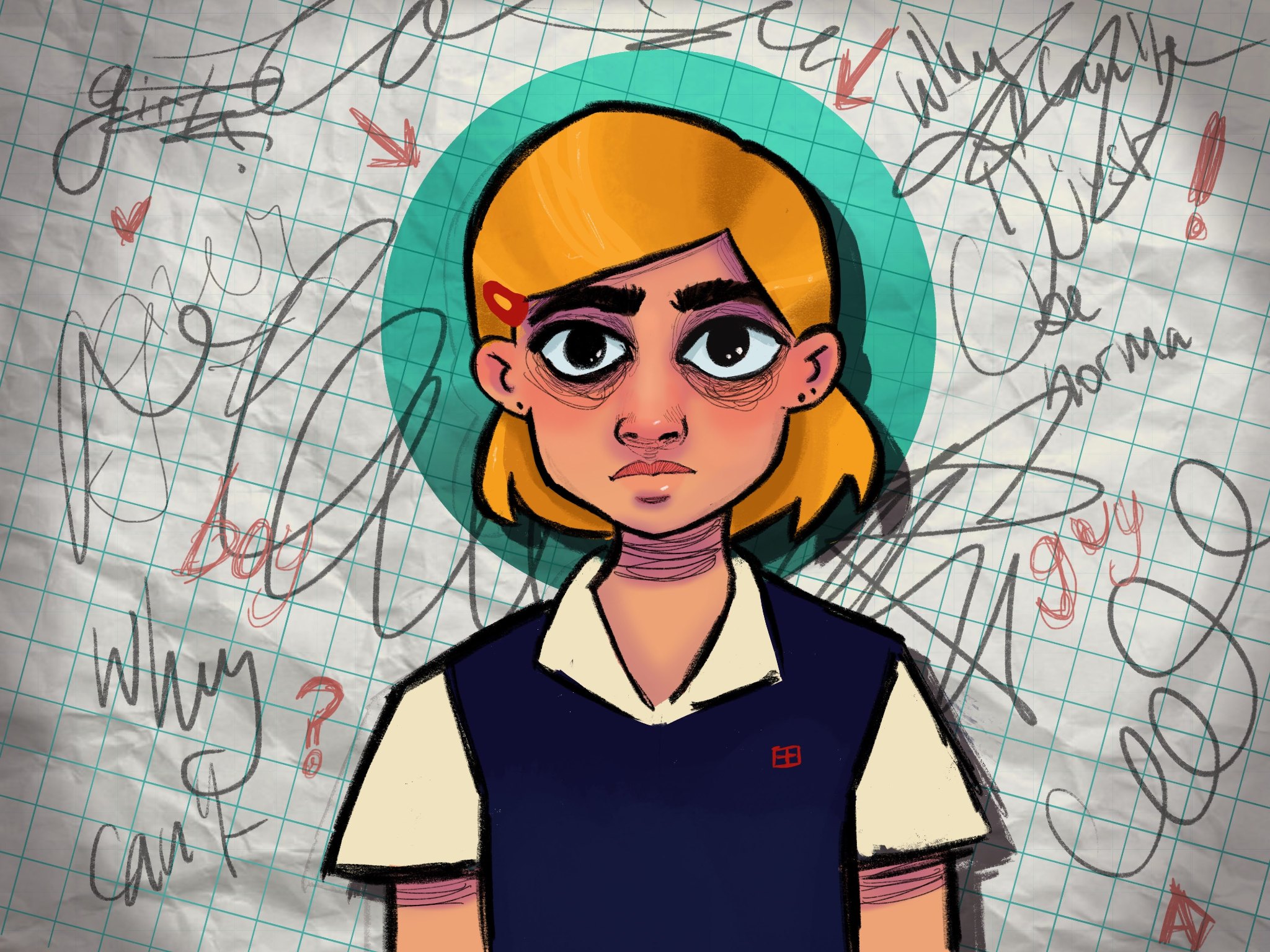 I was sitting at my desk reading Stephen King’s Carrie, when my seventh-grade classmate excitedly sat down next to me with a loud thunk. Nose deep in my novel, I could still feel the excitement radiating off her face. I nervously looked up at her.

“Hey!” she said, her smile extra wide. She had freckles sprinkled across her elfin face, and her eyes crinkled up with pure joy. Even though we were both wearing our Catholic girls' school uniforms she looked like the personification of summertime. Her wind-swept hair was impossibly beachy for mid-autumn, and friendship bracelets danced around the wrists of her sun kissed skin. I couldn’t help but be interested in what she was going to say.

“I uh… What happened last night?” I was curious but confused. I was worried it’d be a story about a party I wasn’t invited to or friends I didn’t know. It was easy to make me feel isolated back then, but to be fair, I didn’t help my case. I could have won a gold medal in the sport of avoiding people, especially fellow teens.

“So, you know that picture you have on MSN? Well, a friend of mine was looking through my friend list and saw it!”

I felt fireworks go off inside my body. My my face went hot. Did I just have a stroke? Am I having a juvenile stroke? Is this what a heart attack feels like? I hoped my face didn’t betray any emotion, but who was I kidding? I cried during furniture commercials and debates. I’d never be a star poker player with my expressive condition.

Unsurprisingly, she noticed and her eyes widened in a kind of unbelievable giddy excitement.

“I know, right? I thought it was hilarious! I had to explain to her that you were just a girl I knew from school. She was so embarrassed!”

Just a girl. I wilted and slunk back in my seat. I prayed to a god I didn’t believe in to strike me down. Dear god, melt me on the spot like a chocolate Easter bunny in the back of a hot Honda Civic. Amen.

Before she could continue, our history teacher came into the room and the class started. I wasn’t paying attention, I had been handed a mental burrito filled full of spicy emotions and needed time to digest.

It was tricky. I always knew I would have preferred living life as a boy. As a young kid, I asked my mom why I didn’t have a cool boy’s name like my other guy friends. I demanded to be renamed, and she yelled back that I wasn’t like the other boys because I wasn’t a boy. It stung, even more than when said that “Sonic” was a stupid choice for a name. (She was right about that, though.)

In elementary school, other kids made fun of me for looking like a boy. I was incredibly tall, towering over kids and teachers alike. I was often mistaken for a teacher or a teenager. It seemed like I was stuck in physical purgatory, my height just another way I would never be like other kids. I wasn’t girly enough for the girls but I was too different and confusing for the boys.

Looking back, it’s obvious that I was a queer and trans kid. It was clear to me then too, even though I didn’t have labels for who or what I was. In the 1990s, people were only beginning to accept gay and lesbian adults Queer children? Nope, that was an impossibility. Children like me didn’t exist. We weren’t included in acceptance because we just weren’t real.

Choosing to go to a Catholic girls' high school was a choice I made for my emotional and social survival. In my mind, it was an opportunity to avoid the boys who rejected my odd (trans) boyhood, and who were disgusted by my crushes on them. If I started to “like like” a fellow classmate, I’d be mocked. If he and I were seen together, we’d be the target of bullying because we looked “gay.” When I didn’t reject their sneers about how I was “a man” (damn straight!), I had rocks thrown at me.

My other hope for Catholic girls' school was that it would teach me how to be a girl. I thought girlhood was a strict discipline, like ballet. In my mind, I wasn’t good at it because I’d started late. If I could just go to some kind of boot camp for girls, then maybe I’d be saved. Maybe I wouldn’t be the target of ridicule anymore.  I’d finally be able to connect with others, in a way that eluded me my entire life.

It didn’t take long before I realized that wouldn’t be the case.

I made an honest effort at first, I really did. Then a few months after I turned thirteen, my life changed. I found a guide online that was aimed at trans men and making oneself look masculine. It was a revelation, like I was trans Moses and God himself had dropped the Ten Commandments directly into my lap.

It listed haircuts that masculinized the face, clothing that would hide hips, and instructions on how to bind your chest flat. It even gave information on how to take hormones in order to masculinize your body, something I had thought was purely science fiction. Puberty was such a wretched experience for me, especially since I felt like I wasn’t excited for the end result. This promised me another direction, and control. It felt alchemical. I was so excited I could barely read it, so I secretly printed the manual out and hid it under my bed.

Suddenly, I knew wasn’t crazy. There were people like me, and they weren’t just on Jerry Springer.

For a couple of years after reading the guide, I made a point of being myself. I wore baggy clothes and cut my hair in an extremely masculine way. It was so radical at the time that the administration kept pulling me out of class and telling me to “do something with it”. When I replied that there was no way to speed up hair growth, they’d usually grumble and press their hands firmly against my head trying unsuccessfully to flatten it.

I’d like to say that the bullying stopped, and that the girls were able to accept someone different. That would be a lie. The tormenting changed form; it was no longer boys throwing rocks at me, but girls throwing gossip. It got so extreme that I vowed to never eat in the cafeteria again. Instead I ate my lunch in the library, much to the displeasure of the poor librarians who were becoming increasingly annoyed with all the crumbs stuck between book pages.

This went on for a few years, but willpower isn’t always enough to sustain a teenager. The human spirit can be broken, especially by oneself. What happened next surprised everyone, including me.

One muggy day, shortly after our summer exams, I suddenly walked into school wearing the most feminine clothing and makeup I could find. I had decided that it was better to try to fit in, even if it cost me my integrity and sense of self. I divorced myself from all the things that made me honestly “me,” and locked them away in a mental prison. I wouldn’t open that cage for a full decade, afraid of being socially exiled again.

In a sense, my conversion therapy had been successful. I got what I wanted.

But eventually, a decade later I realized: I didn’t want that. I didn’t want to be accepted at the cost of myself. I didn’t want to hide who I was anymore, even if it meant ostracization. First, I told my friends that I was actually a man, and to my profound relief, they accepted me with love and kindness. Then my parents, who were first afraid for my safety in a world where bigotry reigned supreme, but they slowly accepted me too. After I began to medically transition with testosterone, I told the world.

And the world surprised me in turn. The girls I did anything to try and impress suddenly sent me messages of kindness and support. They didn’t know what I needed, but they were happy I had found myself again.

And for that, I am grateful. 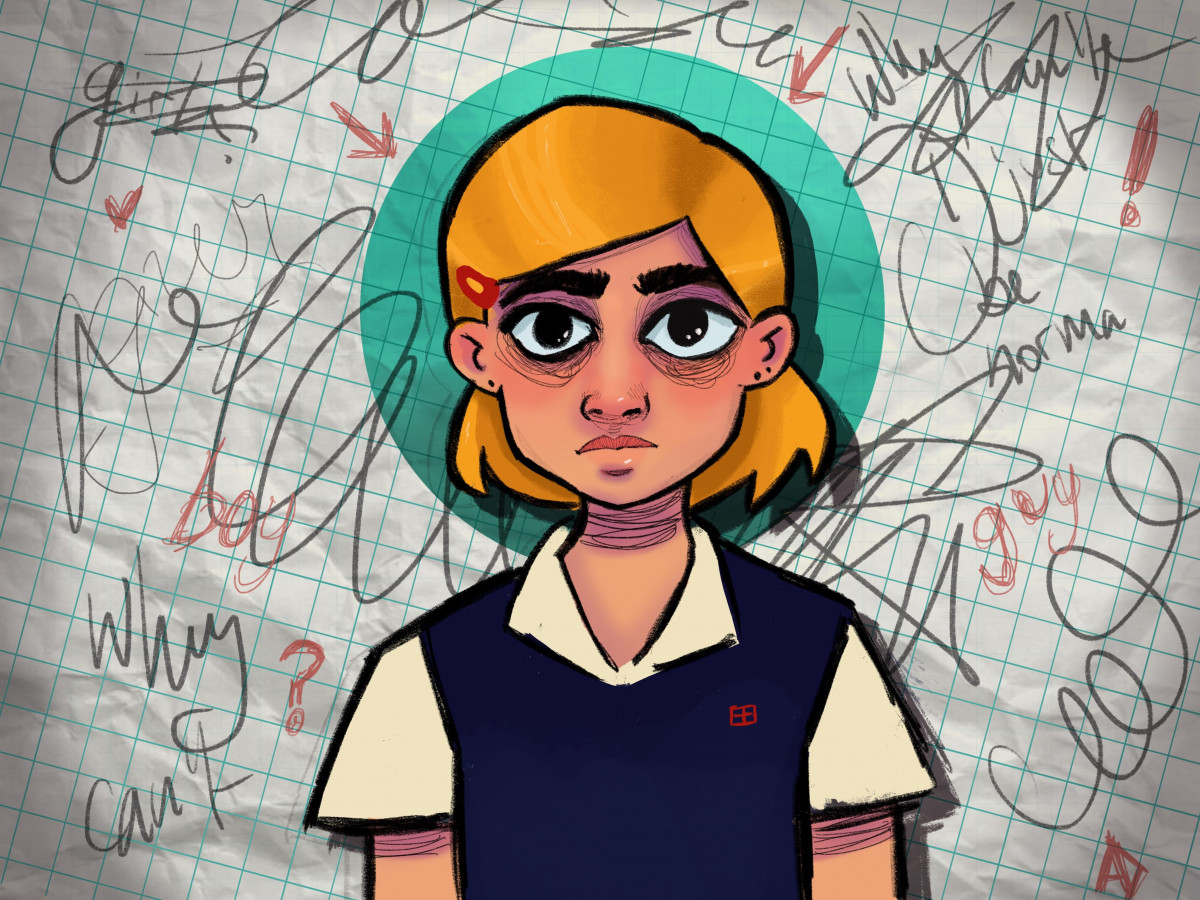