Jessica realizing that her language has not actually been inclusive

There is no room for shame or guilt here. We are all perpetrators. We are all survivors. We all could be better read than we are. And hopefully, we, in this case you and I, are both emotionally honest enough to recognize this so that we can move on.

I want to help us with that journey and give away some tips for folks who have been struggling, and trying, but still don't know what to do when it comes to including gender non-conforming people and trans people in their work, ideas, lives, hearts, and institutions.

As a poet, for me, it starts with language. When it comes to being non-binary, a genderqueer friend recently expressed to me, "God damn it, our bodies shouldn't be classrooms--but perhaps our media could be." So I put together this little glossary to assist with knowing what language to use, because language is important and I'm tired of correcting casual transphobia in person.

Language is a framework; it is the conceptual model that you signal to others you have an understanding of the world with new definition, with updated ways of describing experiences, with words that are meant to affirm our identities as opposed to make them seem like unimportant, second-class preferences.

Our genders, especially as trans, gender non-conforming and people with other marginalized gender identities, are not preferences. They are our truth, our light, a space sometimes unknown or unnamed - a space that exists despite how uncomfortably it may look in a cis binary world.

I have had to put a lot of time and energy into re-imagining language. When I was organizing an International Women's Day festival back in a pre-Covid March, I started looking again at the most inclusive way to describe the expansive identities we were celebrating. I was in the process of digging and trying to identify the most honest way to speak to the nuance and the depth of the people I was targeting; women (trans and cis), intersex people, non-binary people, gender non-conforming people, people who are aligned with the identity of women but are not women, Two-Spirit people, and all those existing within the spaces of marginalized gender identities. There was no clear answer, there was no encyclopedia, there was no short and accessible Youtube video; this is a space that we are still confronting as a society.

Of course, there is no shortage of words like womxn, womyn, wom!n, femme, women-identifying, female-identifying, etc. Yet, all of these terms (with their varying degrees of historical transphobia) fall short of acknowledging a true and new space that needs to be carved out. I will unpack the real meaning behind these terms momentarily.

While for trans and non-binary people, the problems in these terms may seem clear, but those who don't have experiencing claiming a marginalized identity there is a huge disconnect.

Honestly, most days going through the world as a non-binary person, I am caught in between wanting to scream and laugh at the ridiculous stuff people throw at me:

“So what’s your gender ‘preference?’”

“What is your gender ‘style?’”

And, “ladies and gentlemen,” it really grinds my gears, so I had to make this graphic about this cis nonsense. 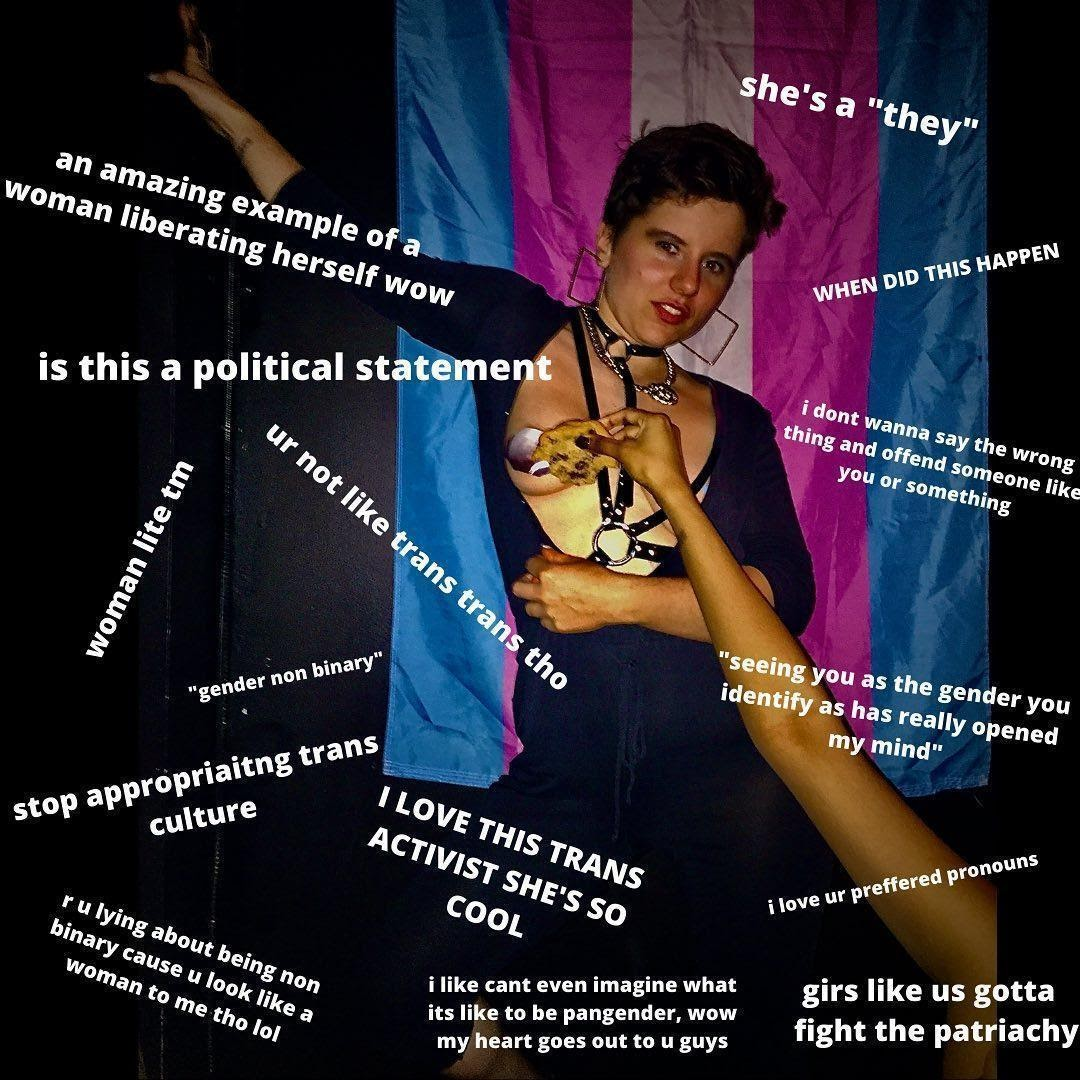 ANGELIQUOI? fed up with the cis nonsense

Through all of these experiences, I see the immense amount of confusion and the labour that we, the trans and non-binary community, have to go through explaining and asserting how we need to be called into the room.

First thing I want to mention, because it comes up a lot in my life is the use of the word ‘trans’.’ I love this word; it is who I am. But when folks tiptoe around using ‘trans’, that is where the deeply offensive language takes hold.

By using other words to avoid saying ‘trans,’ cis people are showing to me that ‘trans’ is a word that is uncomfortable, taboo, or ugly for them to say, and by extension, an identity that is rooted in discomfort, taboo-ness, and ugliness.

When I hear ‘trans,’ I hear ‘beautiful’. And I hope you hear the same. And if you don't, I recommend reading Susan Stryker's excellent profile of trans people through the 20th century, Transgender History.

Moreover, folks are developing a fear of referring to women as a group of people, as well as people who have an identity aligned with womanhood, such as non-binary women, demi-girls, and trans-feminine people who are not women. These are a handful of the most common ones I see well-intentioned feminist advocates using.

Here are some examples of words that well-intentioned people use to refer to these groups of folks that are missing the mark or used incorrectly, and why:

‘Womyn' was created to de-center ‘man’ from the spelling of woman. In theory, this makes sense. But the implementation and original use of this word was trans-exclusionary. This creation of a linguistic marker of women’s independence from men was built upon a biologically essentialist understanding of femininity.

Michigan Womyn’s Music Festival, held annually from 1976 until 2015, was one of the first recorded places where ‘womyn’ was used. This so-called ‘feminist’ music festival was only open to “womyn-born womyn,” meaning that the use of the word's origins de-center ‘man’ from cis women, but not from trans women. While it’s been reclaimed by certain folks, it is in large used to other and exclude trans women from the experience of womanhood.The updated term, ‘womxn’, came into popularity in the past few years as an attempt to remove it from this transphobic history.

This, again, is a term with good intentions. It was popularized to make space for Black, Indigenous, women of colour, and trans women to undo the erasure caused by ‘womyn’ and ‘women’. In bell hooks’ 1981 book Ain’t I a Woman? Black Women and Feminism, described the way in which Black women through the institution of slavery, were removed from the label of women and moved into a a category of ‘other’ where Black womanhood was deviated from the American white racist ideal. bell hooks described that, “All the myths and stereotypes used to characterize black womanhood have their roots in negative anti-woman mythology,” and discusses that in American literature the word ‘woman’ has been synonymous with ‘white woman’. In this way, over time the claiming of ‘womxn’ as distinct from 'women' has become more of an identity for Black trans and cis woman to claim, as a way to reclaim a space that excluded Black women. The history of this word is scrambled, and most people are still on board with its intention to encompass women of all identities, particularly Black women, as well as gender non-conforming people. However, other folks see that this word can be used to problematically differentiate trans women, Black women, and other women of colour as the other. The histories of the way ‘womyn’ has been used, and ‘womxn’ is being used is important, to be consistently mindful of how these terms have been claimed and reclaimed by Black communities and trans communities to ensure that this word does not just become an umbrella that means ‘cis white women +.’

All of these carry the same problems as 'womyn' and 'womxn', rooted in a transphobic and racist history that excludes many groups of women and other marginalized gender identities. Most of the time, people use these kinds of words to stand in for ‘women and non-binary people,’ but they really shouldn't. As a non-binary person, I am not a Woman, or a Womxn, or a Womyn, or Wom#n, or any other kind of Wom@n, I am a trans person. Not a woman.  However, perhaps these terms feel like they encompass folks who identify as binary women, as well as not at the same time (like demi-girls, femmes, non binary women)—but their histories and evolutions are important to keep at the forefront of our thoughts and expression.

Stands for Assigned Female at Birth. I have no problem with this term, if it helps trans+ people navigate their identity in explaining it to cis people. However, I personally have seen this used to again erase my experience as a person who is not a woman. In my view, we need to be moving away from ‘female’ and ‘male’ as binary sex markers anyway, as well as the cultural obsession with trans people's original assigned gender and/or sex.

This language is very harmful because it implies that some (i.e trans) women only ‘identify’ as women, while other (cis) women are women. If someone identifies as a gender, they are that gender. Point blank. A woman is a woman is a woman. There is no such thing as a woman who only ‘identifies’ as one. So just say ‘woman.’ Done.

I have also seen people use this word in an effort to seem inclusive to non-binary people. Why? How? It is beyond me. I will reference this article, because it feels boring at this point for me to explain why ‘women-identifying’ doesn't include non-binary people (people who do not identify as women).

Femme is a word that is aligned with femininity, and an umbrella term for the diverse gender expressions that are within the concept of womanhood and other gender expressions associated but not necessarily strictly within womanhood. Many queer or trans people may identify as ‘femmes’ but not as ‘women’. However, the issue is that many non-binary people are not femmes, many cis or trans women do not present in a way that is overtly feminine, and many trans men get lumped into the category of femmes; these are all profound ways of misgendering people. While ‘femme’ is a distinct identity, much like the word ‘womxn,’ it should be used with intention and care.

Female is a biological essentialist word that points to a sex binary that doesn’t exist. Sex is a spectrum and gender is a spectrum. We must resist the urge to categorize people based on genitalia and reproductive characteristics. It is not inclusive at best, and at worst it is dehumanizing for people to be grouped under this term, especially trans people, non-binary people, and even a lot of cis women don't appreciate this term.

There are a lot of other words I could have listed here. The way we use language is a movement from a starting place that we did not decide. So trans-ing boundaries that were put onto us is a given. As much as carving out new histories to find ourselves in is a must. The future is bright, when we all learn to communicate about gender from a place of intention and expansiveness —a commitment to learning, unlearning and relearning how the truth is written and spoken.

I hope, together, we can move together to move from a place of fear, judgement, and hatred for trans people to a place of delight, wonder, and curiosity. There are many books to learn, and many more words and languages to craft together. I hope this helps some of you articulate a boundless experience of gender.